The early symptoms of Progeria include developmental delay and localized scleroderma. When the patient passes the infancy, other symptoms will become more obvious.

Aging is a process that a person must go through in his life. For thousands of years, people’s exploration of reversing aging has never stopped. Although the development of medicine in recent years has continued to extend human life, aging has always been irreversible.

Recently, a recent study by the research team of Dr. David Liu from the Massachusetts Institute of Technology and Harvard University Broad Research Institute showed that they used CRISPR gene editing technology to achieve the reversal of aging in mice for the first time.

Specifically, the researchers found that in the mouse model of progeria, after replacing the mutated bases in the cells by gene editing technology, the aging and degenerated cells were replaced, successfully restoring the mouse heart, aorta and other aging organs The function of the mouse has more than doubled the life span of mice from 7 months to nearly 1.5 years.

The research was published in Nature magazine on January 6 with the title “In vivo base editing rescues Hutchinson–Gilford progeria syndrome in mice”. 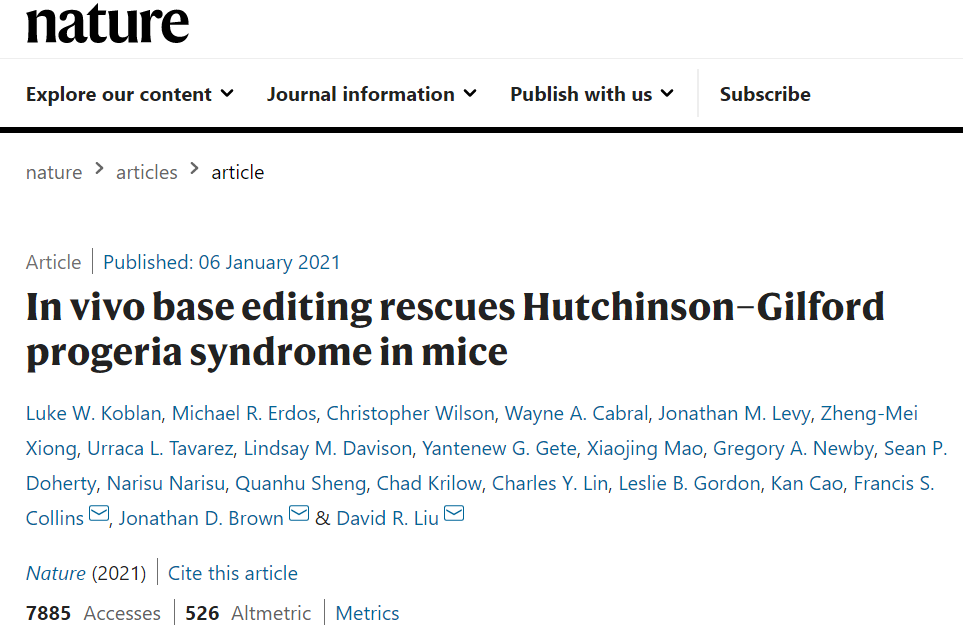 Regarding the results of this research, Dr. Leslie Gordon, one of the authors of the paper, said, “This research will provide exciting new possible cures for new treatments for children with Progeria.” Progeria, also known as Progeria, is more difficult to accept than aging. Hutchinson-Guilford Progeria Syndrome (HGPS for short) is a rare and fatal genetic disease that causes accelerated aging of children, with an incidence of about 1 in 4 to 8 million. This extremely rare disease can cause people to age quickly, and eventually they will die of senile disease that the elderly only get.

For example, growth restriction, thin hair, and narrow face, mouth and nose are all unique symptoms of progeria patients. Progeria patients usually have small and weak bodies, just like the elderly. 53061610579807521 The next symptoms will develop into wrinkled skin, arteriosclerosis, cardiovascular disease, etc. This is also the most painful thing for premature aging patients, who suffer from body organ failure at the best age.

Sam Berns was also a patient with Progeria. As he got older, Sam’s hair began to fall out, his figure became thinner and his weight no longer increased, but he still faced life positively and broadened his life. In a TED talk in 2013, he shared his experience of illness. Sam said: “Although I have encountered many difficulties in life, I don’t want others to feel sorry for me.”

At the beginning of 2014, the Progeria Research Foundation reported that Sam had died of this incurable disease at the age of 17. Even in November 2020, the FDA announced the approval of the world’s first drug for the treatment of progeria, Lonafarnib, for the treatment of Progeria (HGPS) and Progeria-like Laminopathy (PL).

However, such drugs cannot cure premature aging and can only extend the life span of patients by about 2.5 years. Hope to cure premature aging: Like many fatal genetic diseases, CRISPR is also caused by genetic mutations. Specifically, in the gene LMNA that encodes lamin A, a base C (cytosine) at a specific position becomes T (thymine).

This small change in one of the two LMNA genes can have serious consequences. Toxic proteins produced by the mutant gene accumulate in the nucleus, causing DNA damage. Eventually, children with HGPS begin to age rapidly from the age of 1, 2 and most of the patients’ life expectancy is less than 15 years.

Obviously, in order to cure premature aging, it is necessary to correct genetic defects and correct bases at specific positions on LMNA. In 2019, a team tried to use CRISPR technology to treat progeria mice, but the effect was limited, only extending their lifespan by 25%. 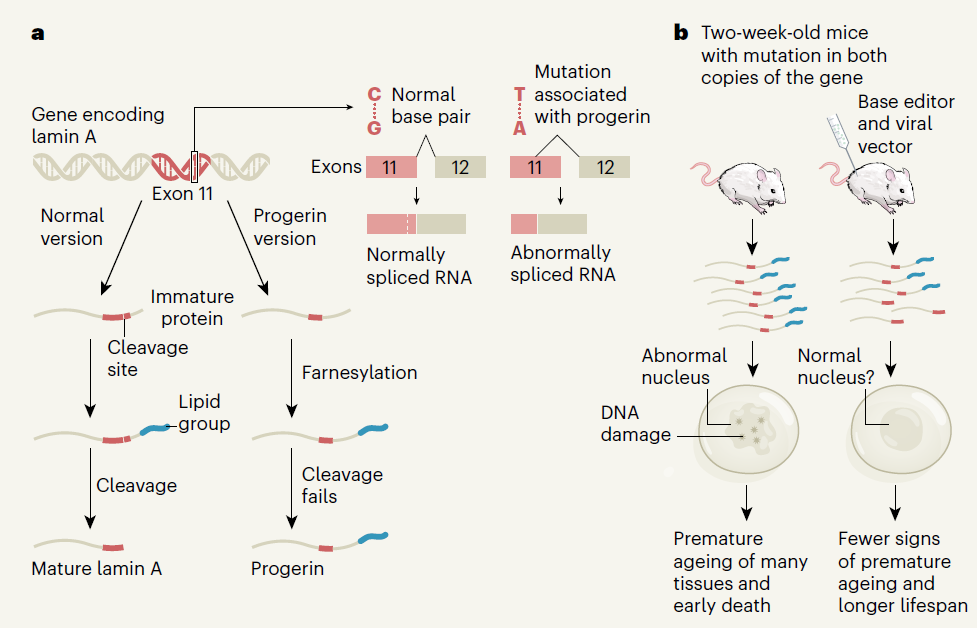 In this study, the research team led by Dr. David Liu used the “LMNA” gene editing system developed by the tissues of patients with premature aging earlier to repair the genetic defects of premature aging more effectively and reduce off-target effects.

In a mouse model of progeria, the researchers found that this gene editing tool using adenovirus as a vector can repair 90% of the LMNA gene defects in mice, especially in the liver, heart, etc., through orbital or intraperitoneal injection. In important organs, almost all senescent cells have been replaced with normal cells. 77971610579808091

Not only that, the researchers also found in subsequent follow-up that even after 6 months of treatment, many cells in the mice still maintained normal genetic information. The most gratifying thing is that the life span of the treated mice has been extended from 7 months to 18 months, while the life span of normal mice is only 2 years.

This also means that only one injection can almost achieve a cure. In this regard, Professor Jonathan Brown, one of the authors of this article, said, “We are very pleased to see that the research in the laboratory is expected to have therapeutic effects. Our ultimate goal is to develop a method to treat human progeria. Of course, we still Several key questions need to be answered in the animal model.”

In general, this research has initially demonstrated the powerful application prospects of CRISPR in the progeria syndrome, and has improved human understanding of aging. However, in order to use CRISPR gene editing to treat human diseases, it is necessary to ensure the safety of such interventions. On this basis, if this method succeeds in repairing the changes caused by premature aging in key tissues, it means that this method is expected to help those with related mutations continue to be healthy, prolong life, and improve the quality of life.