T cells can extend their own telomeres through a new mechanism to prevent aging.

The effect kills telomerase in seconds, and the latest research reveals that T cells can extend their own telomeres through a new mechanism to prevent aging.

The immune cells in our bodies are always on high alert, always ready to fight pathogens. To function effectively, they need to work continuously in the body for decades.

However, immune cells such as T cells require massive clonal expansion in the process of fighting pathogens, leading to telomere depletion that cannot be compensated for by telomerase alone.

Therefore, we still have considerable knowledge gaps on how senescent T cells are formed and whether T cells have other pathways besides telomerase activation to escape senescence and maintain long-term immune memory.

This new telomerase-independent mechanism could help develop new ways to extend the lifespan of the immune system, helping people live healthier and longer lives, and may also aid in the clinical treatment of diseases such as cancer and dementia.

Why does the immune system age?

It is well known that the end of each chromosome in eukaryotic cells contains a structure called telomere , which is a complex composed of a highly repetitive series of TTAGGG and proteins.

The presence of telomeres serves two purposes: one is to protect the gene-coding regions on chromosomes and prevent them from being destroyed.

The second is as a life clock, controlling the number of times a cell can divide. Each time a cell divides, the telomeres shorten a little bit. Once telomeres are depleted to a certain extent, cells enter a state of senescence and die. 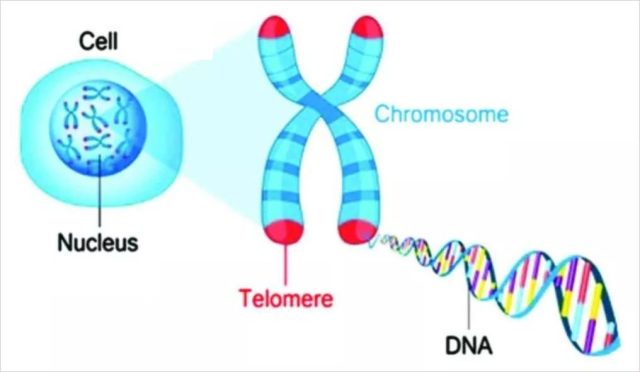 As an important immune cell, T cells, like other cells, shorten their telomeres as cells divide.

Once telomeres are short enough, T cells stop dividing and enter a state of senescence, causing the immune system to no longer function effectively, leading to chronic infections, cancer, and death.

Therefore, telomere depletion is also one of the important hallmarks of aging.

Telomerase is a DNA synthase that is specialized in maintaining telomeres in stem cells, cells of the immune system, and fetal tissues and germ cells.

But it does not function in other cells, leading to telomere depletion in cells.

In this latest paper, the research team investigated the response of T cells to infection by foreign microorganisms.

They found that there is a telomere transfer reaction between different immune cells mediated by extracellular vesicles (EV) .

T cells that undergo telomere transfer become long-lived and possess memory and stem cell properties, allowing the T cells to protect the host from lethal infection in the long term. 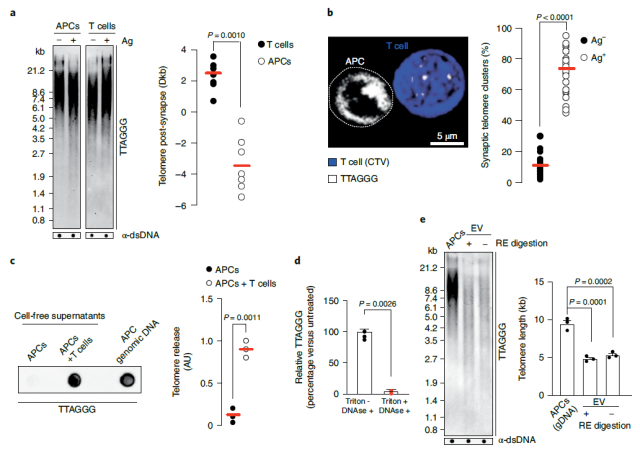 Upon contact with these T cells, antigen-presenting cells (APCs) degrade the telomerin complex (Shelterin) to provide telomeres, which are cleaved by the telomere trimming factor TZAP and then translocated to extracellular vesicles at immune synapses bubble (EV) . 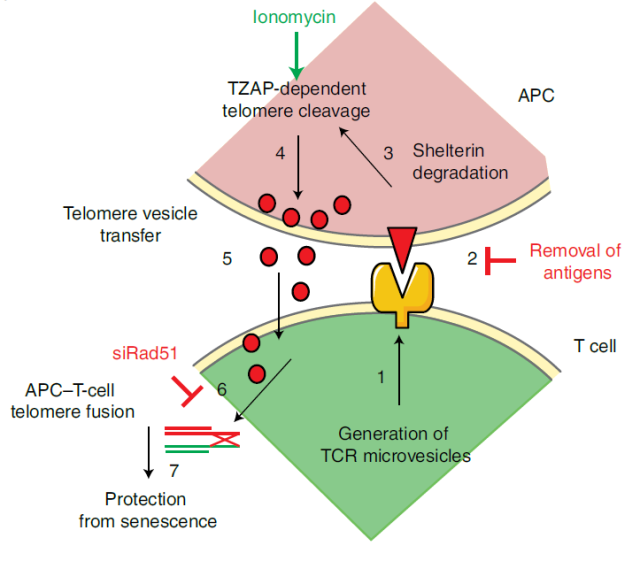 The research team said that this study made an important complement to the study of telomeres and telomerase, showing that telomere length can be regulated by telomere transfer between immune cells, and more importantly, these findings prompted us, It is possible to slow or even cure aging simply by transferring telomeres.

Anti-aging with a new mechanism

After discovering this new immune cell anti-aging mechanism, the research team further determined that the telomere extracellular vesicles could be purified from blood and added to T cells, in humans and mice. Anti-aging activity is shown in the immune system.

Realization results show that in human cells and mice, this purified preparation of extracellular vesicles can be administered alone or in combination with a vaccine, extending the time of protection of the immune system, thereby avoiding the need for re-vaccination.

Overall, the study uncovered a new mechanism that slows and possibly even prevents the natural aging of immune cells, and using this new mechanism promises to develop new ways to extend the lifespan of the immune system, helping people live healthier and longer lives , and may also contribute to the clinical treatment of diseases such as cancer and dementia. 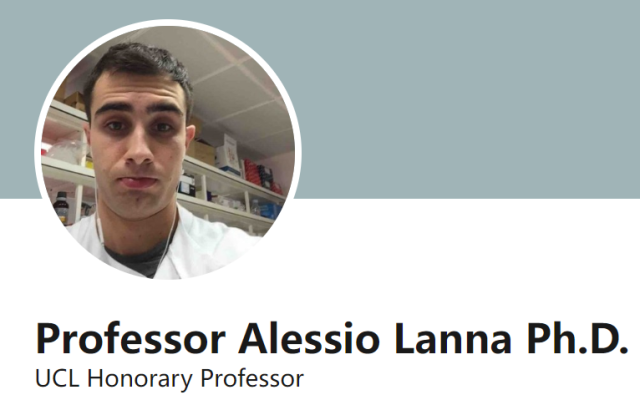 Professor Alessio Lanna , who led the study, said that telomeres have been studied for more than 40 years, and for many years, it was thought that there was only one pathway in cells, telomerase, to lengthen and maintain telomere length.

This latest study has uncovered a new telomere elongation mechanism that works independently of telomerase and far more effectively than telomerase.