The organelle obtained by the organelle immunoaffinity purification system can greatly avoid cross-contamination between organelles and crosstalk of membraneless subcellular structures.

Mitochondria, lysosomes, endoplasmic reticulum and other organelles are composed of relatively independent structures and closely linked intracellular membrane systems that efficiently support the body’s normal physiological activities. The imbalance of the cell inner membrane system leads to the imbalance of cell metabolism and the abnormal regulation of intracellular signal network, which causes uncontrollable malignant regulation of cells and promotes the occurrence of cancer and other malignant diseases.

Different organelles have their own unique compositions of nucleic acids, proteins, and metabolites, which promote the efficient operation of various biochemical reactions and support their own unique functions such as energy metabolism. Analysis of organelles, proteomics and metabolomics, has effectively revealed the unique functions and dynamic relationships of each organelle in important cell activities such as energy metabolism balance.

Long non-coding RNA (LncRNA), as a type of non-coding RNA with a length greater than 200 nt, plays an important regulatory function in cell metabolism and tumorigenesis and development.

A series of preliminary studies by Lin Aifu and other research groups of Zhejiang University found that the binding of LINK-A to cell membrane lipids promoted the plasma membrane PIP3-AKT signal transduction, cytoplasmic CamK-A mediated the interaction of Ca2+ signals with NF-κB signals, and nuclear BCAR4 Mediated Hedgehoge-Hippo signal transcription coordination, showing the close connection between the biological function of lncRNA and its subcellular location.

Therefore, it is of great significance to explore the cellular spatial hierarchical distribution of LncRNAs and how to dynamically regulate cell metabolism and tumor pathogenesis under physiological and pathological conditions.

The study established the organelle immune affinity purification system, mapped the lncRNA map of the organelle, and revealed the important regulatory role of mitochondrial lncRNA GAS5 in helping cells cope with energy-deficient conditions and mediating the dissociation of the metabolic compartment of the TCA cycle, in order to study lncRNA The relationship between the dynamic regulation of subcellular space and the occurrence of human diseases provides a new perspective.

In order to accurately analyze the distribution of organelle RNA components, researchers have established a set of organelle immunoaffinity purification system through exploration and optimization. Traditional organelle purification methods mainly rely on the density gradient centrifugation of sucrose, percoll and other media, which are separated according to the different sedimentation coefficients of different organelles. However, due to the overlap of sedimentation coefficient ranges between some organelles (such as mitochondria, lysosomes), it is difficult to achieve Accurate RNA detection resolution.

Therefore, the author developed a purification scheme for organelles based on immunoaffinity purification, using a simplified cell homogenization-centrifugation method to obtain a light mitochondrial fraction suspension (LMF), and then pass the mitochondrial surface marker protein Tom20 or lysosomal surface marker protein Lamp1 The antibodies captured the mitochondria and lysosome components in the LMF suspension, and finally enriched by Protein A/G magnetic beads and magnetically separated to obtain the immunoaffinity purified complete organelles.

The organelles obtained by this organelle immunoaffinity purification system can greatly avoid cross-contamination between organelles and crosstalk of membraneless subcellular structures, and because there is no need for exogenous transfection or chemical treatment of cells in advance, the integrity of the biochemical characterization of organelles can be better preserved. It is suitable for the dynamic analysis of various organelle components under different stress conditions and the extraction and analysis of organelles in tissues. 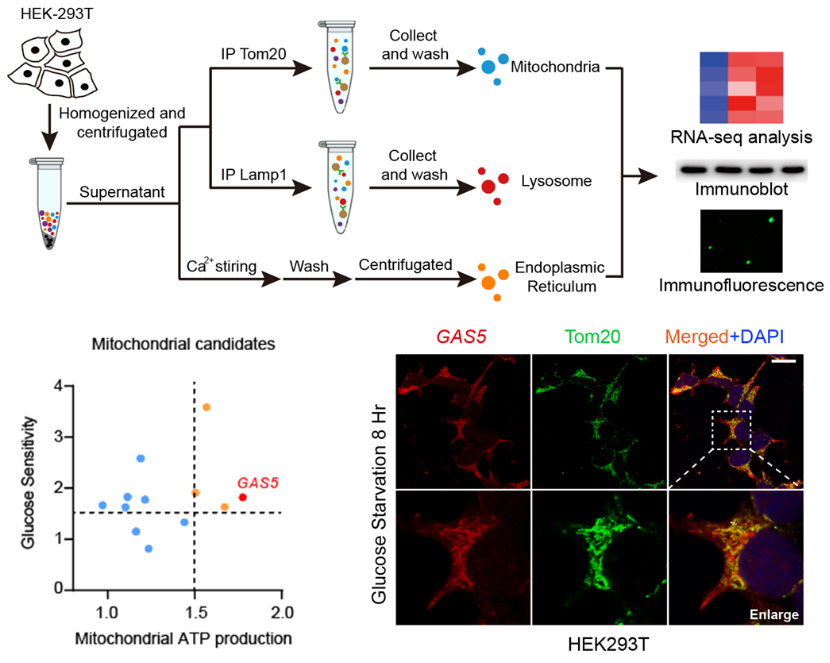 In the established organelle lncRNA map, the author screened high abundance of organelle lncRNA through organelle extraction-qPCR, and then used mitochondrial/lysosome localization glucose sensitivity and mitochondrial ATP production/lysosome surface AMPK activation as indicators. Screened organelle lncRNAs with potential organelle-related metabolic regulation functions, including lncRNA GAS5 (Growth-Arrest-Specific 5) closely related to mitochondrial energy metabolism. The researchers further confirmed the sugar-sensitive mitochondrial localization of GAS5 and its effect on the production of mitochondrial ATP and NADH through experiments such as FISH, mitochondrial separation-qPCR, ATP detection, NADH/NAD+ detection. GAS5 has been reported to inhibit cell growth and proliferation through competitive inhibition of GR (glucocorticoid receptor) transcription activity, microRNA buffer sponge and other ways, and it is a broad tumor suppressor molecule.

MDH2 is the node molecule that maintains the steady-state cycle of energy metabolism in the mitochondrial TCA cycle. The researchers further found that MDH2 can be coupled with its upstream and downstream FH and CS to form a metabolic compartment, and help MDH2 complete the counter-standard Gibb in the cell through the series of reaction substrates Free energy (ΔG0′) response.

Through the 4KR mutation of the four acetylation sites of MDH2-K185/301/307/314, the authors found that the acetylation modification of MDH2 has a central effect on the stability of the metabolic compartment of FH-MDH2-CS. Through dynamic mitochondrial translocation, GAS5 can respond to and transmit glucose deprivation signals, promote MDH2 to recruit SIRT3 and down-regulate MDH2 acetylation modification, inhibit MDH2 and FH/CS interaction to form compartments, thereby down-regulating the TCA cycle metabolic flow and inhibiting mitochondrial metabolism.

Metabolic rearrangement is an important driving factor for tumor progression, and mitochondrial metabolism provides a large amount of biosynthetic material raw materials, which is essential for tumor occurrence and development. Researchers found that GAS5 is low in breast cancer and is positively correlated with a good prognosis, while MDH2, CS, and FH are highly expressed in tumors and are related to poor prognosis. Overexpression of GAS5 significantly inhibits the formation of FH-MDH2-CS metabolic compartments in tumors, TCA cycle and tumor proliferation, thus confirming the important supporting role of mitochondrial TCA cycle on tumor occurrence and development, while low expression of GAS5 in tumors helps tumor cells avoid energy substances The inhibitory effect of mitochondrial metabolism in the absence of conditions promotes tumor progression. 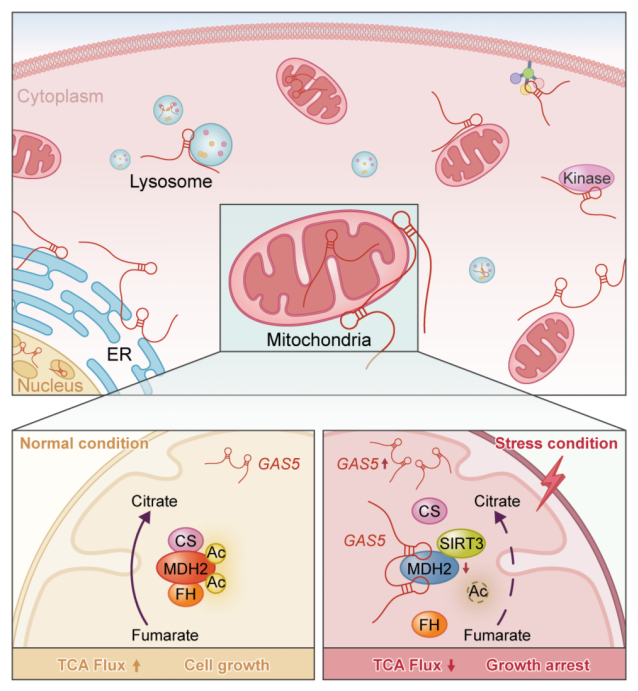 In summary, this study established the organelle immunoaffinity purification system, mapped the lncRNA map of the organelle, and revealed the important regulatory function of mitochondrial lncRNA GAS5 on the metabolic compartment of the TCA cycle MDH2, which provides support for mitochondrial metabolism to support tumorigenesis and development. The new evidence provides a new potential molecular target GAS5 for tumor clinical diagnosis.