The genomes of higher mammals such as humans contain a large number of long non-coding RNAs (lncRNA), most of which have unknown functions. Among tens of thousands of lncRNAs, recent studies have discovered hundreds of lncRNAs related to various cellular processes and physiological functions, but they are indispensable in the core cell process, and lncRNAs that play a decisive and key role are still very rare.

There are many types of lncRNA, complex and diverse functions, and lack of research foundation and prior knowledge. Therefore, in many biomedical researches, it is often impossible to deal with lncRNAs with unknown functions, and it is difficult to quickly generate verifiable and original scientific hypotheses. An important research direction of Yang Xuerui’s group is dedicated to the development of cancer systems biology methods. In response to the practical problems in the study of lncRNA functions, they focused on the tumor system and used publicly published large-scale cancer cohort data to systematically analyze the impact of thousands of lncRNAs on the transcriptional regulation pathways in tumors as a quantitative indicator of the physiological functions of lncRNA , And prioritize.

Previously, the laboratory has used a similar strategy system to study the transcriptional regulation system of single lncRNA or RNA binding protein and DNA methylation sites of the whole genome (Cell Reports, 2019), and found that HNRNPC protein is in the breast on this basis. In cancer cells, it controls the processing of the intron Alu and the accumulation of endogenous double-stranded RNA and regulates the cellular immune response (The EMBO Journal, 2018). It was found that lncRNA NEAT1 drives the prostate cancer cell cycle by controlling the transcription factor AGRN (Cancer Research, 2018).

The research team discovered for the first time an lncRNA that is essential for the structure and function of the nucleolus of cells with high proliferation rates, and named it LETN. The study also revealed the co-evolutionary relationship between lncRNA LETN and its interacting protein NPM1, which is highly illuminating for future lncRNA functional studies.

In this study, Yang Xuerui’s laboratory based on the computational analysis of liver cancer multiomics cohort data found that RP11-196G18.22 ranks first among all lncRNAs, which is significantly different from all other lncRNAs, showing a very powerful and global influence .

Inspired by this clue, the research team carried out a comprehensive and in-depth study of the function and mechanism of RP11-196G18.22, and finally found that it interacts with the NPM1 protein and plays an indispensable key role in high proliferation cells. It was renamed LETN (lncRNA essential for tumor cell proliferation via NPM1).

The study found that LETN expression levels are up-regulated in a variety of tumors. It resides in the nucleolus through direct binding to the nucleolar protein NPM1 and plays a vital role in promoting the formation of NPM1 pentamers.

Nucleolus is a very important membraneless organelle in eukaryotic cells. It is the site for the transcription and processing of ribosomal RNA and the assembly of ribosomal subunits. It controls cell protein synthesis, mitosis, stress and other biological functions. Rapidly proliferating cells such as tumor cells and neural precursor cells are highly dependent on the active nucleolus function, and the function and structure of the nucleolus depend on the formation of NPM1 pentamers. Therefore, LETN controls the normal morphology and cellular functions of the nucleolus by controlling the oligomerization assembly of NPM1, including ribosomal RNA synthesis and chromatin condensation.

Furthermore, from an evolutionary point of view, LETN only appears in humans and other higher primates, and NPM1 protein also has two specific amino acid mutations in higher primates. The paper found that it is the mutations at these two sites that cause NPM1 to be highly dependent on non-coding RNA LETN. Therefore, the paper proposes that LETN and NPM1 may have a co-evolutionary relationship, which makes the nucleolar regulation of human cells appear a new level of regulation performed by lncRNA LETN. 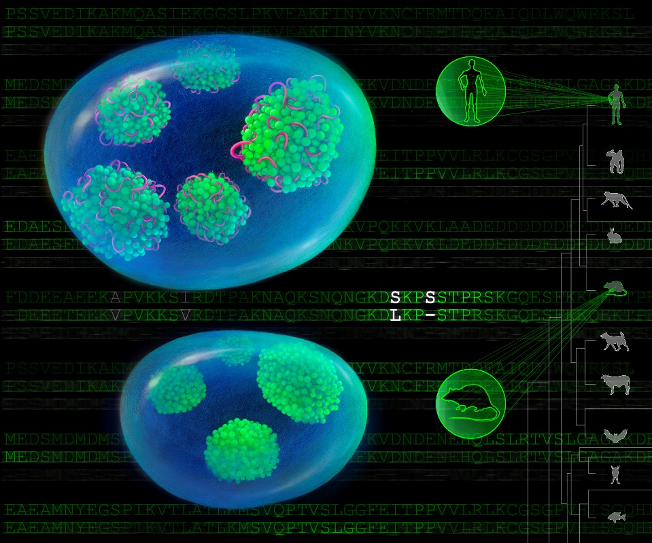 Doctoral student Wang Xianteng from School of Life Sciences, Tsinghua University is the first author of the paper, and Yang Xuerui is the corresponding author of the paper. Other members of the research group Hu Xiaolin, Song Wanlu, Xu Hui, Xiao Zhengtao, Huang Rongrong, etc. have made important contributions to this research. The Shen Qin Research Group of Tongji University and Professor Zhao Haitao of Liver Surgery of Peking Union Medical College Hospital provided great assistance to the research.