Somatrogon (hGH-CTP) is glycosylated and consists of the amino acid sequence of human growth hormone and the 28 amino acids of the C-terminal peptide of human chorionic gonadotropin β subunit (CTP). Specifically, one CTP copy of human chorionic gonadotropin β subunit was added to the N-terminal of growth hormone, and two CTP copies were added to the C-terminal. Compared with current growth hormone replacement therapy, this design aims to reduce the frequency of injections from once a day to once a week. 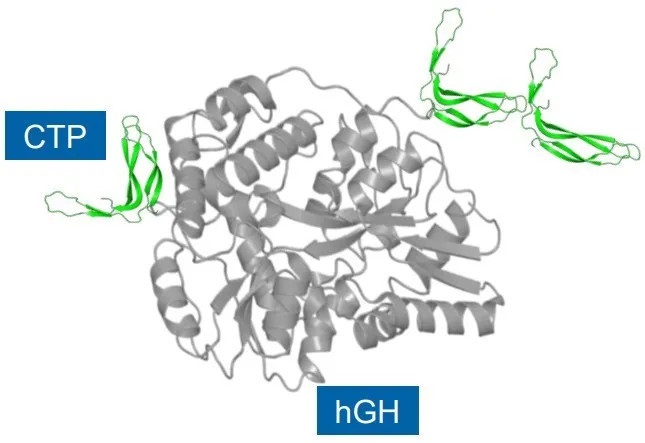 The main endpoint of the study is the height velocity at 12 months. Secondary endpoints include changes in height standard deviation at 6 months and 12 months, safety and pharmacodynamic indicators. Children who complete this study have the opportunity to be enrolled in an open-label, multi-center, long-term expansion study, and can continue to receive or switch to somatrogon. Approximately 95% of patients entered the open-label extension study and received somatrogon treatment.

By measuring the growth rate of height at 12 months, the study reached the primary endpoint of non-inferiority compared with somatropin injected once a day. Somatropin has a history of decades, but daily injections may cause patients to lack compliance.

The top-line results of the study showed that the least squares mean of the somatrogon group was significantly higher than that of the somatropin group, which were 10.12 and 9.78 cm/year, respectively; the therapeutic difference in the rate of height growth was 0.33 (95% CI 0.39-1.05). In addition, the researchers pointed out that compared with somatropin, treatment with somatrogon was associated with higher changes in height standard deviation scores at 6 and 12 months.

In terms of a key secondary endpoint, the somatrogon group had a higher rate of height growth at 6 months compared with the somatropin group. In addition, the somatrogon treatment in the study was generally well tolerated, comparable to somatropin, especially in terms of the type, number and severity of adverse events.