Science: COVID-19 mutant strains may trigger a new wave of “very bad” epidemics. Due to the sudden increase in the infection rate caused by the mutant strain of the COVID-19 virus, England yesterday announced a blockade of the entire territory until at least mid-February.

Let’s first look at a set of latest data.

On January 5, local time, according to data published on the British government website, in the past 24 hours, there were 60,916 new confirmed cases of new coronavirus pneumonia in the United Kingdom, an increase of 2,132 from the previous day. This is the first time that it exceeded 60,000. The highest record since the outbreak of the pandemic, and has exceeded 50,000 cases for eight consecutive days; 830 new related deaths have doubled from the previous day. 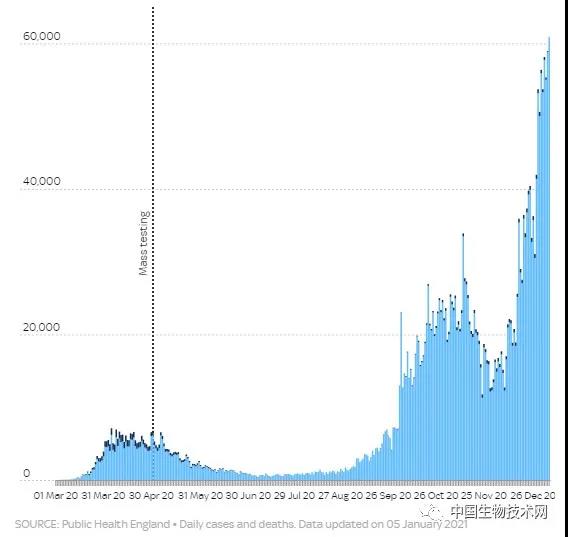 On January 6, the headline of “Science” published an article titled “Viral mutations may cause another ‘very, very bad’ COVID-19 wave, scientists warn”.

For scientists studying the new coronavirus, entering the new year did not see a new atmosphere, but brought a sense of deja vu. As at the beginning of 2020, the whole world is watching anxiously as a new virus spreads in one country and is racing to analyze risks for other countries.

This time, it is not a brand new threat, but a rapidly spreading mutant strain of the new coronavirus-B.1.1.7. Last month, B.1.1.7 attracted wide attention from scientists immediately after it was first identified in the southeast of the United Kingdom. It soon replaced other mutant strains and may indicate that the COVID-19 pandemic will enter a new one. The dangerous stage.

Jeremy Farrar, the head of the Wellcome Foundation and an infectious disease expert, said: “People are worried that B.1.1.7 will become the world’s dominant virus at a higher rate of spread, and it will trigger another very bad epidemic. Although We can already predict the trajectory of the new coronavirus pandemic in 2020 very well, but I think we are now entering an unpredictable stage, which is the result of virus evolution.”

This concern has led some countries to speed up the emergency use of vaccines or discuss vaccination programs that may quickly protect more people. But with the emergence of new mutant viruses in many countries, many scientists called on the government to strengthen existing control measures. British Prime Minister Boris Johnson announced new stricter restrictions on January 4, including closing schools and requiring people to “not go out unless necessary.” But other countries are still hesitant.

Emma Hodcroft, a virologist at the University of Basel in Switzerland, said: “I do feel that we are now in a different situation. Many European countries are watching. I really hope that this time we can realize that this is our early warning. This is our chance to defeat this mutant strain.”
Johnson said that the new mutant strain is 50% to 70% more infectious.

In the past month, the number of confirmed cases in the UK has surged, but the country has implemented different levels of restrictions in different regions, as well as changes in people’s behavior and regional infection rates before Christmas. Oliver Pybus, an evolutionary biologist at the University of Oxford, said: “This is an extremely complex situation, and it is difficult to determine the full impact of the new mutant strain.”

However, there is increasing evidence that many mutations in B.1.1.7 (including 8 of the key spike proteins) do indeed enhance transmission. Adam Kucharski, a modeler at the London School of Hygiene and Tropical Medicine, said: “We rely on a variety of imperfect evidence, but now almost all of the evidence points in the same direction. For example, an analysis by the Department of Public Health of the United Kingdom showed that In the United Kingdom, about 15% of people who have been in contact with people infected with the B.1.1.7 virus have tested positive, while 10% of people who have come in contact with people infected with other mutant viruses.”

According to a CNN report, on January 5 local time, British Chief Medical Officer Chris Whitty said that now one in every 50 people in the UK is infected with the COVID-19 virus, which is “really very high”. Whitty said that in the two weeks ending December 30, the number of confirmed cases in the UK increased by 70%. British government data show that comparing the seven-day rolling average. This ratio rose from 287 cases per 100,000 people on December 16 to 487 cases per 100,000 people on December 30.

Pybus said: “If other countries that have detected B.1.1.7 also see a surge in confirmed cases, this will be the strongest evidence we have.”

In Ireland, the infection rate is also rising rapidly, and the mutant strain now accounts for a quarter of sequenced cases. Denmark is a leader in sequencing the new coronavirus, and the data from Denmark cannot be reassuring. Routine monitoring there has found dozens of mutant strains, and the frequency has risen from 0.2% of the genome sequenced in early December to 2.3% three weeks later.

Genomics scientist Mads Albertsen of Aalborg University in Denmark said: “In the past 4 weeks, we have found a typical example of exponential growth in Denmark. These numbers are still relatively low to draw strong conclusions, but if this This trend continues. This will be a clear sign that many countries may face the same problems as the UK.” Albertsen added: “We should start to prepare for the same things happening elsewhere.”

So far, there is no evidence that this new mutant strain will make people sicker, but this is not comforting. Kucharski said that increased transmission capacity of the virus is more dangerous than increased pathogenicity because its impact increases exponentially. He said: “If you are infected with a disease with a fatality rate of 1% but a large number of people are infected, then it will cause more deaths than a disease with a few people who have a fatality rate of 2%.”

Viola Priesemann, a physicist at the Max Planck Institute, said: “If the UK estimates that the number of reproduction (R) of the virus increases by 50% to 75%, it will become more difficult to stop the spread of the virus. In Germany, you Two additional measures are needed to keep the reproduction number below one.”

Isolating the infected and tracing, isolating and testing their close contacts is the first step. Priesemann used an example from Germany to prove that these measures alone can reduce the R value from 2 to 1. But when the number of cases reaches a critical threshold and the public health department is overwhelmed, this means that more stringent measures should be taken on the basis of existing measures to help curb the spread of the new virus.

Hodcroft agreed. She said: “The situation has never been so serious. What is the worst? At most, we have done too much. There are very few newly diagnosed cases. Then we can remove many restrictions.”

There is another benefit of significantly reducing the infection rate, that is, it reduces the chance of further evolution of the virus. Farrar added that other variants have emerged, especially a variant strain called 501Y.V2 in South Africa, which is as worrying as B.1.1.7. He said: “In essence, this is a numbers game: the more the virus spreads, the more opportunities for mutants to appear. In the long run, mutations that threaten the efficacy of the vaccine may appear.”

William Hanage, an epidemiologist at Harvard University’s Chen Zengxi School of Public Health, said: “It is frustrating to feel that the world is back to what it was in early 2020. But we must stop this virus. Fatalism is not a non-drug intervention.”