Following the AstraZeneca vaccine, another COVID-19 vaccine may be associated with the risk of thrombosis.

According to CCTV News citing foreign media reports, on April 9, the European Medicines Agency (EMA) stated that it was conducting a corresponding assessment of whether there is a potential connection between Johnson & Johnson’s COVID-19 vaccine and thrombosis. At the same time, it has expanded the scope of investigation of AstraZeneca vaccine. .

According to reports, four patients have suffered from abnormal thrombocytopenia with thrombocytopenia after being vaccinated by Johnson & Johnson, and one of them died. This disease is very similar to AstraZeneca’s thrombosis.

This is the second COVID-19 vaccine to be investigated by EMA on the risk of thrombosis. Two days ago, EMA issued a statement stating that the AstraZeneca vaccine may be associated with rare blood clots. During the 20 million doses of AstraZeneca vaccine, 79 people developed blood clots after the first dose of the vaccine, and 19 of them died. The specific reasons for this situation are still under investigation.

Johnson & Johnson said that there is currently no clear evidence that rare thrombosis cases are related to the vaccination of its COVID-19 vaccine, and it is working with experts to evaluate relevant case data. If the vaccinated person develops symptoms, they should seek medical assistance immediately.

Affected by this news, Johnson & Johnson’s share price fell more than 1% on the 9th.

4 people had blood clots after being vaccinated by Johnson & Johnson

On April 9, local time, the EMA issued an announcement stating that 4 cases of abnormal thrombosis associated with thrombocytopenia have been found among the vaccinators of Johnson & Johnson vaccine, and 1 case died as a result. It is understood that 1 of these 4 thrombosis cases appeared in the clinical trial stage of the vaccine. Johnson & Johnson’s statement at the time was that “there is no evidence that such symptoms are directly related to vaccination”; the other 3 cases Occurred after the United States began to approve vaccination.

Johnson & Johnson responded in a statement on Friday that it is currently cooperating with regulatory agencies to evaluate case data on rare blood clots. In addition, the company also reiterated that “there is no clear evidence that there is a causal relationship between vaccination of its COVID-19 vaccine and rare thrombosis cases” and said that if the vaccination person develops symptoms, they should seek medical assistance immediately.

In addition to the 4 cases reported by Johnson & Johnson, on the same day, EMA also reported 5 cases of capillary leakage suspected of being vaccinated with AstraZeneca, indicating that it will expand the scope of investigation.

According to media reports, the patient experienced plasma infiltration from blood vessels to interstitial spaces, which caused edema and decreased blood pressure. In this regard, EMA will conduct further investigations based on all the data currently available to determine whether this disease is related to the AstraZeneca vaccine.

Many people in the U.S. have had adverse reactions after being vaccinated by Johnson & Johnson

On April 7, 11 people at a large vaccine station in Colorado, USA experienced side effects after receiving the Johnson & Johnson vaccine. Out of caution, the vaccine station was forced to close.

The Colorado Department of Public Health stated that some patients experienced nausea and dizziness after receiving the Johnson & Johnson vaccine. Centura Health, which manages the scene, further confirmed that nine people were monitored at the scene and sent home. Out of caution, two people were taken to a nearby hospital.

Centura said in a statement: “We followed the agreement and, out of caution, cooperated with the state and decided to suspend operations for the rest of the day.”

The company’s spokesperson Kevin Massey told local news organizations that more than 600 people were turned away due to the side effects of the vaccine that day and were unable to participate in the “Vaccine for All” event. “Today, more than 1,700 patients were vaccinated. The 640 patients who could not be vaccinated this afternoon will be automatically rescheduled to April 11 (Sunday) and vaccinated at Dick Sporting Goods Park.” Centura said, “Our goal is to continue to provide Colorado as soon as possible. People are vaccinated, and patient safety is the first priority.”

Ma Xi told the media that the number of adverse reactions to vaccination was about 0.8%.

The North Carolina Department of Health said on Thursday that 18 of the more than 2,300 people vaccinated against Johnson & Johnson in Wakr County that day had side effects, and 4 of them needed to be sent to hospital for treatment. The county announced on the same day that it would suspend vaccination on that day.

On Thursday night, US CDC experts and local officials concluded that the adverse reaction in Colorado does not mean that there should be concerns about the vaccine. Eric France, Chief Medical Officer of the Colorado Department of Public Health and Environment, said: “After examining the symptoms of each patient, analyzing the same batch of other vaccines, and confirming with the CDC, we are confident that there is no reason to worry. .”

He emphasized that vaccination is “far safer than becoming a severe COVID-19 disease.”

Johnson & Johnson announced the results of its phase III clinical trial at the end of January this year, claiming that its vaccine is 85% effective in preventing severe new coronavirus pneumonia and can completely prevent hospitalization and death caused by new coronavirus pneumonia. In a trial in the United States, the vaccine was 72% effective in preventing COVID infection after 28 days. After averaging test results in other parts of the world (including a study on a variant in South Africa), the effective rate dropped to 66%. 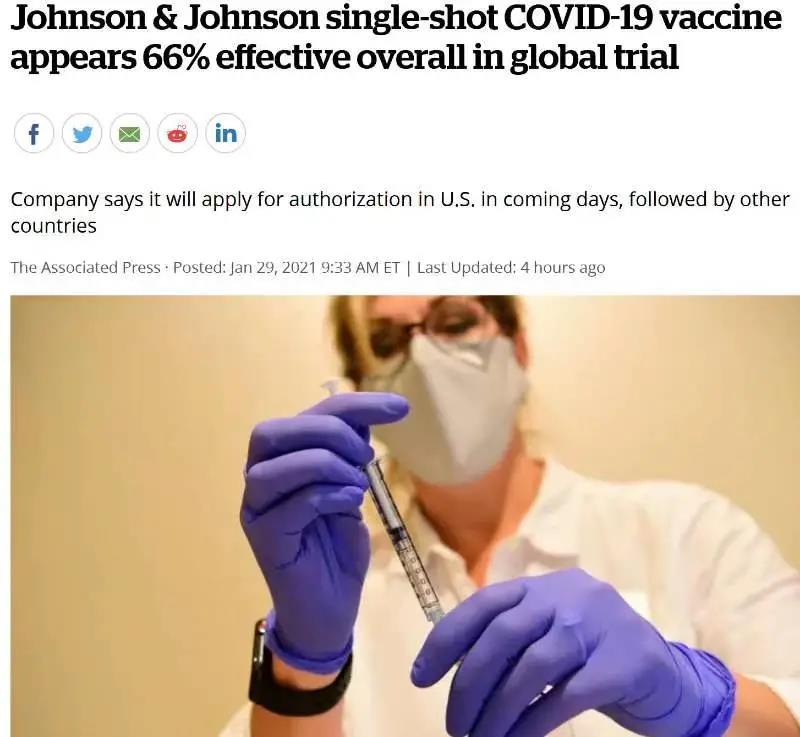 One of the biggest advantages of Johnson & Johnson vaccine is that it only requires one injection. Another advantage is that it can be stored in a regular refrigerator.