According to Reuters, on April 14, local time, Denmark announced the complete suspension of AstraZeneca’s COVID-19 vaccine.

The head of the Danish health agency, Soren Brostrom, said at a press conference that the findings of the AstraZeneca thrombosis incident “showed real and serious side effects.” AstraZeneca said that they respect Denmark’s choice and will continue to provide data to it to provide a basis for future decisions.

This move made Denmark the first country in the world to completely stop the use of AstraZeneca’s COVID-19 vaccine.

On the same day, the President of the European Commission von der Lein issued a document stating that the EU has vaccinated its citizens with 100 million doses of the COVID-19 vaccine. At the same time, after experiencing safety controversies such as the delayed delivery of AstraZeneca vaccine and the possibility of thrombosis, the EU is turning its attention to other options.

According to the Italian News, the European Commission has reached an agreement with the leaders of many EU countries that “decided that the vaccine contracts signed with AstraZeneca and Johnson & Johnson will only be valid this year” and will not be renewed when they expire.

What happened to AstraZeneca’s COVID-19 vaccine?

On December 30, 2020, the adenovirus vector vaccine AZD1222 developed by AstraZeneca was first put into use in the United Kingdom, and was soon approved to obtain a conditional license within the EU on January 12, 2021 for the prevention of 18 years of age and older New coronavirus pneumonia in the crowd.

On March 3, 2021, the Austrian health authority urgently stopped the vaccination of a batch of AstraZeneca’s COVID-19 vaccine. The cause was that two of the country’s residents who had received this batch of vaccine developed thrombotic diseases. One person died as a result.

On March 9, the European Medicines Agency (EMA) Pharmacovigilance Risk Assessment Committee (PRAC) made preliminary statistics and found that the incidence of thrombotic diseases among AstraZeneca vaccinators (22 cases/more than 3 million people) was consistent Common sense, and the incidence of thrombotic diseases in the general population is comparable. Based on this, EMA stated that it can continue to carry out AstraZeneca vaccination work while collecting relevant data.

After Germany released the data, EMA and WHO each initiated an evaluation procedure for AstraZeneca, but then both stated that the vaccine can continue to be vaccinated while monitoring for adverse reactions. 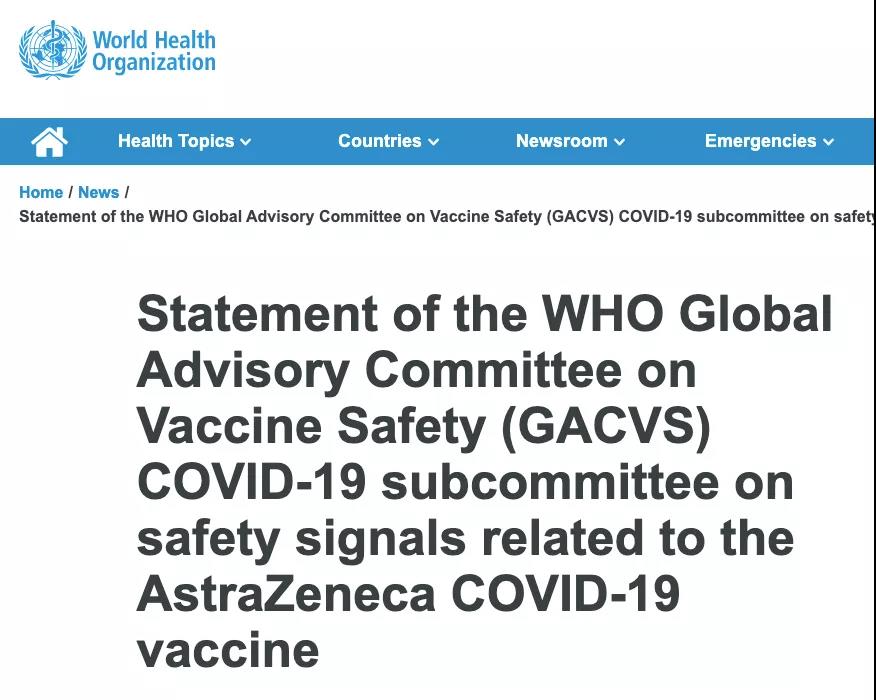 According to the WHO and EMA, more than 20 million people have been vaccinated with this vaccine worldwide, and a total of 469 cases of thrombosis have been reported. Therefore, EMA believes that these adverse events are rare events, and the benefits of vaccination to prevent infection are far greater than the occurrence of thrombosis. The risk of adverse reactions.

Affected by this, Germany announced on March 19 that it will continue to carry out AstraZeneca vaccination, but they have also invested in the study of thrombotic events, trying to uncover this rare thrombosis by analyzing the clinical and biochemical manifestations of patients. The veil of sexual diseases.

The persistence of the researchers has reaped results. On March 19, the research team announced to the media that “antibodies that cause blood clots have been detected in patients who had thrombosis after vaccination.” At the same time, they called on other medical institutions in Germany to receive similar patients. Send the blood sample to the team for research.

On March 28, a joint team consisting of Greifswald University, Vienna Medical University, Austria, McMaster University, and Paul-Erich Institute published a paper on the preprinted scientific paper website ResearchSquare (after the paper) (Officially published in NEJM on April 9th), officially announced that the previously discovered “coagulopathy” is clearly related to the vaccine, and recommended that medical institutions in various countries call this type of situation “vaccine-related immune thrombotic thrombocytopenia” (VITT) .

The paper reveals the principle of VITT

According to the records of the German Federal Vaccine Regulatory Agency, most patients with thrombotic diseases after vaccination have both thrombosis and severe thrombocytopenia, and antibodies that promote thrombosis can also be detected in the patients.

This situation is highly similar to an autoimmune thrombotic disease-heparin-induced thrombocytopenia (HIT).

As the name suggests, HIT is an autoimmune disease mainly caused by the anticoagulant heparin. Heparin, as a polysaccharide extracted from pig offal, will inevitably make the immune system of some patients over-sensitized and recognize it as a “foreign body” for attack.

Embarrassingly, in HIT patients, the immune system actually secretes antibodies against platelet factor 4 (PF4), which is often mixed with heparin. The PF4 protein itself has a unique chemical structure and is not easily recognized by antibodies. Therefore, although there are a large number of antibodies in the body of HIT patients, they can remain disease-free for a long time without exposure to heparin.

However, once these people receive heparin treatment again due to medical factors, the PF4 protein will directly generate opportunities for contact with antibodies under the bridge of heparin, causing platelets to be stimulated by the antibodies to produce spontaneous agglutination, and eventually form life-threatening blood vessels in the body. Thrombus.

Because the platelet aggregation induced by PF4 antibody is not controlled by the normal physiological mechanism of the human body, this reaction will gradually deplete the coagulation materials such as platelets and fibrinogen in the body. Therefore, patients often show thrombocytopenia, even difficult to control bleeding and DIC, etc. Serious situation.

To prove that the vaccine induces a disease similar to HIT, researchers need to rely on in vitro tests to identify the nature of previously discovered antibodies.

The researchers continued to conduct control experiments and found that in the above-mentioned mixed system, adding a small amount of vaccine can also “activate” antibodies, and the effect is very similar to the previous experiment.

Considering that the PF4 protein on normal platelets can be activated by antibodies under the pull of some molecules similar to heparin, they preliminarily speculated that certain components of the vaccine itself may act as the “mediator” of heparin in this reaction. 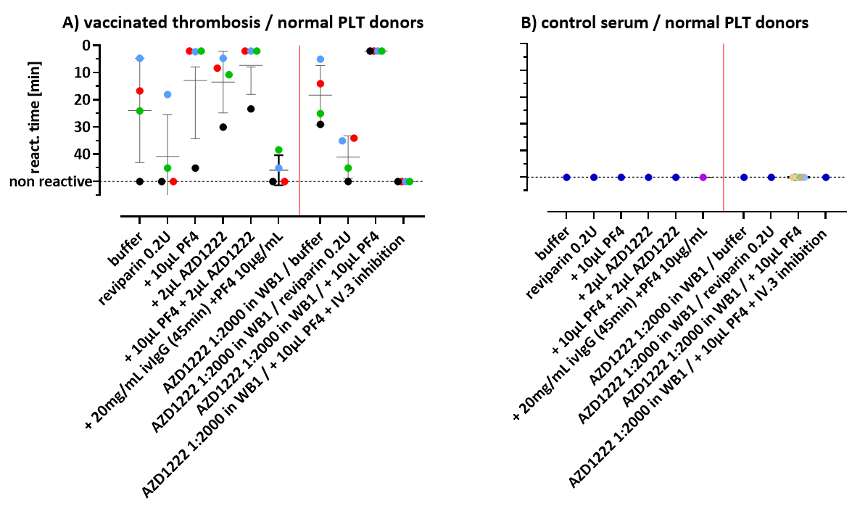 In the end, the researchers concluded that AstraZeneca’s COVID-19 vaccine may have some “unexpected factors” in the manufacture, which caused a small number of patients to “want to be right” after the injection to produce antibodies against the PF4 protein. Because the vaccine lasts longer in the circulation than the antibody production time, the vaccine plays the role of heparin in the traditional HIT reaction, attracting PF4 antibodies in the blood circulation to the platelets, causing a coagulation disorder similar to HIT.

Due to limited data, the researchers did not explain the “unexpected factors” that induce antibodies. It may come from the plant-derived excipients used in vaccine production, or it may only be induced by strong inflammatory stimuli, or other reasons. There is no conclusion yet. .

Coincidentally, on the same day that the study was published, another study from a Norwegian scholar was also published in NEJM. They used the plasma of a local VITT patient in Norway to reproduce the findings of the aforementioned team.

Although restricted by conditions, these two studies included a slightly smaller sample size and did not reproduce the structure of the new antibody, but this is enough to prove that VITT is a real disease, and it also provides valuable ideas for clinicians to diagnose and treat VITT.

The study also found that VITT is generally seen in people under 60 years of age. Subsequently, many regions including Germany, France, Finland, Sweden, Italy and Canada have taken preventive measures to limit the age of AstraZeneca’s COVID-19 vaccine.

While the European Medicines Agency (EMA) continues to monitor the safety of vaccines, it requires the summary of product characteristics (SmPC) of AstraZeneca’s COVID-19 vaccine AZD1222 to cover VITT-related content, and releases detailed information about VITT to EU medical workers .

On April 9th, at the pharmacovigilance risk assessment committee meeting, EMA stated that 5 cases of capillary leak syndrome after vaccination with AstraZeneca had been monitored within the European Union, and at the same time, it announced the suspected safety issue. track.

Since capillary leak syndrome is sometimes also related to the overactive immune system, and the fatality rate is not low like VITT, the monitoring conclusion of this adverse reaction may directly affect the fate of AstraZeneca’s COVID-19 vaccine in Europe.

In addition to AstraZeneca, Johnson & Johnson’s Ad26.COV2.S vaccine, which also uses recombinant adenovirus technology, was “successful” in the VITT storm.

As of April 12, there have been 6 cases of cranial venous system thrombosis (CVST) in the United States after vaccination. Subsequently, the U.S. Food and Drug Administration (FDA) and the U.S. Centers for Disease Control and Prevention (CDC) announced that the United States will start from April 13. Suspend the use of the vaccine.

Although the CVST event monitored by Johnson & Johnson vaccine cannot be qualitative, considering the impact of the AstraZeneca thrombotic event, as a preventive measure, the CDC has warned clinicians not to use heparin for patients who are suspected of developing thrombotic diseases after vaccination.

Affected by this, two other widely-commercial recombinant adenovirus vaccines—Satellite V of the National Research Center for Epidemiology and Microbiology of Russia’s Gamalieya and Kevisa of China’s Cansino Corporation—have also been subject to safety concerns. question.

Subsequently, Russia’s Gamalieya epidemic announced that the satellite V’s technology was relatively conservative and did not involve certain procedures that can introduce activating autoimmune substances (such as the new design structure of AstraZeneca’s vaccine and the special cells used in Johnson & Johnson’s vaccine). Production Process).

On April 14, Cansino issued an announcement on the Hong Kong Stock Exchange, stating that Keweisha uses a very traditional type 5 adenovirus vector, which is often used in clinical research, and safety issues are rarely reported, and until now, clinical research has not been monitored. Related events, but continuous monitoring is still very important.

In the history of human vaccine development, vaccine-related adverse reactions are not rare, but in most cases, the disease protection benefits brought by vaccination far outweigh the potential risks of adverse reactions. As a novel vaccine technology, only time will give us the answer to whether the recombinant adenovirus COVID-19 vaccine can overcome the difficulties. 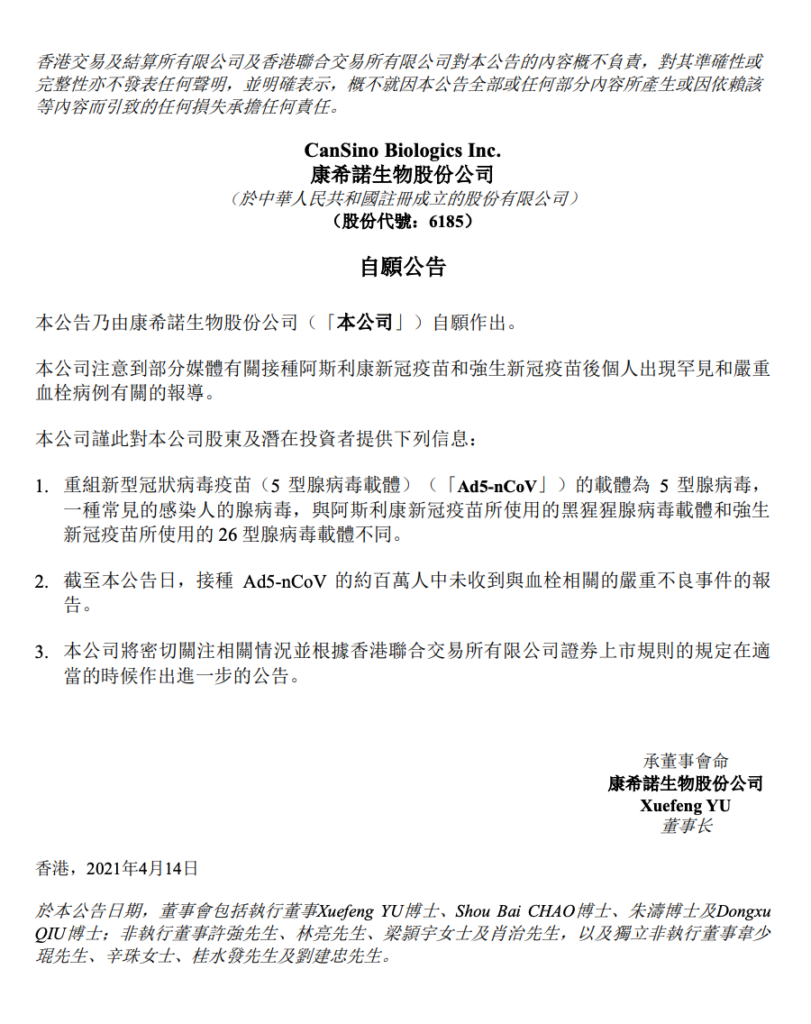 This time, the AstraZeneca vaccine triggered the appearance of anti-platelet antibodies in the user, which resulted in abnormal activation of platelets and thrombotic diseases. Although this type of adverse reaction is rare, it is also fatal. It is rarely seen in the application of human vaccines before.

Further studies on immunological mechanisms are needed to figure out the mechanism that stimulates the body to produce such adverse reactions. And ingredients to achieve a safe and effective vaccination effect.

This incident also illustrates the complexity and arduousness of the development of the COVID-19 vaccine, but this is only a small episode. The general trend of mankind’s victory over the COVID-19 virus will not change as a result.