What are ADC immunogenicity and characteristics of ADA immune response?

What are ADC immunogenicity and characteristics of ADA immune response? Protein drugs have the potential to induce immunogenicity, and the consequences may affect the efficacy or even life-threatening.

New models of biological therapy, such as antibody-conjugated drugs (ADC), fusion proteins, and pegylation, all carry unnatural human protein sequences and/or structural motifs, which may increase the risk of immunogenicity.

Therefore, comprehensive risk assessment, strategies, and analysis are needed to monitor and characterize the immunogenicity of ADCs and other biological therapies to predict and understand the potential clinical effects.

Based on the risk assessment, the immunogenicity data of 8 ADC drugs in 11 clinical trials were analyzed here, which involved a series of solid tumors and hematological tumor indications. For each ADC, the incidence of ADA at baseline, the incidence after treatment, and other characteristics of the immune response were evaluated.

In the clinical studies of these 8 ADC antibodies, these antibodies are unlikely to be related to other components of ADC. In addition, in the 8 ADCs evaluated, the background signal in the untreated patient population sample was similar to the mixed serum control signal from healthy volunteers.

Incidence of ADAs after ADC treatment

Some studies have also been conducted on ADC A and I. Only one patient of ADC A developed treatment-induced ADA in one study. Regarding ADC I, the number of ADA-positive patients in the study ranged from 5 to 18, and the corresponding ADA incidence was between 20.8% and 32.0%. In addition, it is worth noting that in the phase I study, the incidence of ADA in patients with ovarian cancer was higher than that in patients with lung cancer, which were 31.0% (9/29) and 16.4% (9/55), respectively. In the phase II study, patients with ovarian cancer also observed a similar incidence of ADA.

Of the eight ADCs evaluated here, most of the ADAs are for the ADC’s mAb domain, ranging from 86% to 100%. These results are similar to those of Adcetris (brentuximab-vedotin), which has the same linkers and toxic drugs as the eight ADCs described in this article.

Overall, these data indicate that, in most patients, the hapten-like structure of these ADCs does not seem to increase the risk of immunogenicity compared to traditional therapeutic monoclonal antibodies.

As for ADA levels, the total titers of these ADCs range from less than 1.30 to 4.92 titer units, and the average titer of all ADCs exceeds 2.50 titer units.

For the treatment-induced ADA occurrence time, it is shown that the occurrence of ADAs is variable in all ADCs, and the time range of ADA occurrence is between 3 to 42 weeks. In addition, 6 out of 8 ADCs had ADAs in more than 60% of patients within 3 to 6 weeks after starting treatment.

Most of the responses of all ADCs are continuous, with ADC H and I having the highest instantaneous responses (43.8% and 34.1%, respectively). However, it can be misleading to classify ADA responses as persistent or transient in oncology studies, because treatment times are usually short. In fact, a more detailed data evaluation of the ADA positive reaction shows that the three ADCs (ADC F, H, and I) have a higher ADA positive rate. 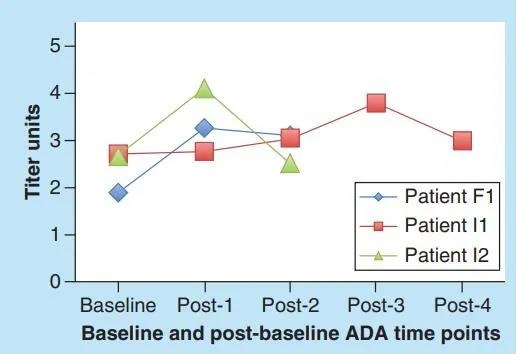 ADA’s impact on other clinical data

Immunogenicity is an important part of the clinical characteristics of protein drugs, and its data should be evaluated in the context of other factors (such as efficacy, PK, and safety). Here we focus on the three ADCs with a higher number of patients who developed ADA, namely ADC F, H, and I. There were 19, 16, and 43 patients with ADA positive after baseline, respectively.

The incidence of ADC F ADAs was 35.8% (19/53), 18 patients had treatment-induced ADAs, and 1 patient had treatment-enhanced ADAs. In general, compared with patients who did not develop ADC F antibodies, no differences were observed in PK, safety, or efficacy outcomes. In addition, ADA titer has an effect on the PK of these patients, but it has been previously reported in cynomolgus monkeys.

A total of 43 patients with ADCI developed ADAs, 41 patients were induced, and 2 patients had enhancement. It is worth noting that 7 patients (including 2 ADAs-enhanced patients) had total antibody levels lower than the detection level at one or more trough time points. However, a comprehensive analysis is still needed to conclude that the ADA titer has an impact on the PK of these patients. However, it is worth noting that high ADA titer values ​​(∼4.00) have a significant effect on the PK curve of trastuzumab ADC in cynomolgus monkeys.

The limited data obtained from marketed ADCs indicate that ADAs have little effect on clinical outcomes. Adcetris has a 37% incidence of ADAs, and patients with persistently positive ADAs have a higher frequency of infusion reactions, which caused two patients to stop treatment. The incidence of ADAs and Kadcyla is 5.3%, and the development of ADA seems to have no effect on safety, PK, and efficacy. In the first phase of the study, Mylotarg had some ADA-positive patients, and one of them had transient shortness of breath associated with ADAs. Under the currently recommended dosage regimen, no additional immunogenicity data for Mylotarg has been generated in clinical trials. In the clinical trial of Besponsa, the incidence of ADAs was 3%, which had no effect on the clearance rate of ADC.

Among the extensive tumor indications in 11 clinical trials, the incidence of ADAs in 8 vc-MMAE-ADCs was between 0-35.8%. Most ADA responses are directed to the mAb domains in ADCs, which suggests that hapten-like structures play only a very small role in generating immune responses against these ADCs. These results reinforce the fact that molecular structure is an important factor in the immune response to biological therapy, but it is not the only factor.

Although the data of the 8 vc-MMAE-ADCs here indicate that as the project enters the later stages of clinical development, the risk may be reduced, but for new ADCs that may use different linkers and more powerful cytotoxic drugs, it is still recommended to adopt Conservative approach. In addition, as the use of predictive immunogenicity tools becomes more common, they will provide additional information to be included in risk assessment and immunogenicity strategies for ADCs and new treatment modalities.