How to make CAR-NK cells used in cancer treatment?

How to make CAR-NK cells used in cancer treatment?   The successful clinical trial of the second-generation autologous CD19 targeting CAR-T cells was approved by the FDA.

The current limitations of these products are the manufacturing time and cost associated with CAR-T cell therapy and the severe toxicity.

The production of autologous CAR-T cell products from patients refractory to chemotherapy is severely limited by the quality of the T cells obtained and the patient’s own survival time, because the manufacturing process takes 2-4 weeks (Figure 2).

In addition, patients must be untreated for two weeks before apheresis to ensure that they have sufficient cell numbers and viability during the production process [21]. 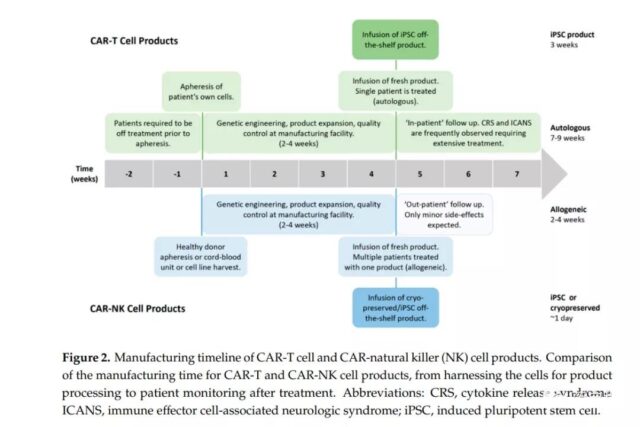 Neurotoxicity, immune cell-related nervous system syndrome (ICANS) and cytokine release syndrome (CRS) are often observed. They are all serious diseases and can be fatal if left untreated, especially in the case of CRS ( image 3).

The safety of NK cells and their anti-tumor potential make them a promising cell type for CAR technology, which can redirect their cytotoxic potential to specific targets. The feasibility of producing ready-made CAR-NK cell products that can generally treat patients will significantly increase the speed of administration and effectively reduce the delay time from the decision of treatment and the first administration to one day (Figure 2).

Since serious toxicity of CAR-NK cells is not observed or expected, treatment can be carried out through “outpatient” follow-up monitoring, which significantly reduces the huge indirect costs associated with CAR-T cell therapy due to long-term hospitalization [61 ].

A recent meta-analysis of ongoing clinical trials around the world identified 520 valid trials and examined 64 different CARs, of which 96.4% of the trials used CAR-T cells [50]. Therefore, in terms of transforming laboratory research into a clinical environment, the CAR-NK cell field is still in its infancy.

In the blood, cytotoxic CD56dim NK cells and immunomodulatory CD56bright NK cells constitute the two main populations of NK cells. Compared with T cells, NK cells are quite resistant to genetic engineering, and because they can undergo a limited number of cell divisions, it is difficult to expand into the large number of cells required for infusion. In order to alleviate these challenges, many early CAR-NK cell studies have used NK cell lines to replace primary NK cells obtained from umbilical cord or peripheral blood (Figure 4). 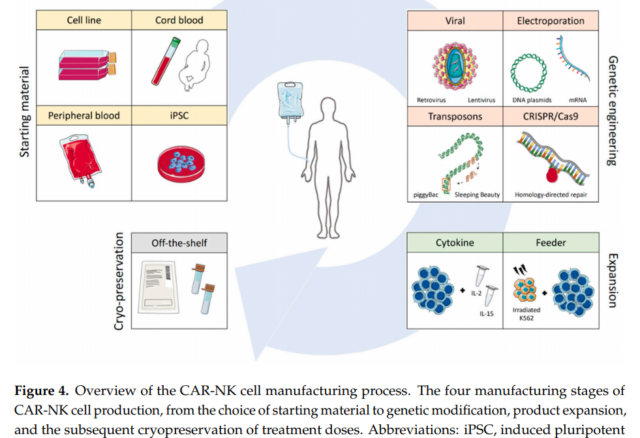 To date, most CAR-NK cell research has been conducted using NK-92 cells, including a large number of current clinical trials (Table 1). Although NK-92 cells are phenotypically similar to the immunomodulatory and less cytotoxic CD56bright population found in the blood, they are functionally highly cytotoxic.

Their activation receptor library includes NKp30, NKp46 and NKG2D, and their inhibitory library is limited to low levels of ILT-2, NKG2A and KIR2DL4. The lack of expression of inhibitory killer immunoglobulin-like receptor (KIR) on the cell surface, and the inability to kill by antibody dependent cytotoxicity (ADCC) due to low or non-existent CD16 expression, greatly distinguishes this cell line from primary NK cells .

NK-92 cells have many genetic abnormalities and have the potential to be permanently transplanted after infusion, so irradiation before infusion is absolutely necessary. A large number of studies have shown that NK-92 cells are still cytotoxic after irradiation, but the lack of proliferation in the body will cause the injected cells to be cleared after only 7 days. Therefore, treatment with NK-92-based CAR products is likely to require multiple rounds of infusion.

NK cells isolated from cord blood (CB) provide another possible raw material for CAR-NK products. 15% to 30% of CB lymphocytes are NK cells. Compared with peripheral blood (PB) NK cells, they are generally considered to be more naive in phenotype and function.

A higher percentage of CB NK cells is CD56bright, which helps to inhibit the overall expression of the receptor NKG2A. The HLA-E ligand of this ligand is usually up-regulated on tumor cells and is associated with poor prognosis. Therefore, NKG2A is an important inhibitory checkpoint and has been targeted by monoclonal antibody therapy to release the potential of NK cells in head and neck squamous cell carcinoma.

Consistent with their immature characteristics, CB NK cells have a higher proliferation capacity and are very susceptible to cytokine stimulation. Cord blood banks make CB-derived NK cells a viable starting product, and the small volume obtained from cord blood requires NK cells to undergo a large number of cell divisions before they can obtain a sufficient number of cells for infusion. Nevertheless, clinical CAR-NK cell products are made from CB NK cells and are currently undergoing clinical testing.

About 90% of peripheral blood NK cells are cytotoxic CD56dim NK cells, which can express a large number of inhibitory and activation receptors. Compared with CB NK cells, PB NK cells are more mature, resulting in enhanced function but reduced proliferation ability. In autologous and allogeneic environments, from NK cells that match and HLA do not match, and from donors that match and KIR-ligand do not match.

The possibility of using cells from unrelated HLA mismatched donors greatly increases the number of donors to choose from, thus significantly improving the quality of the final product. Apheresis is a method of extracting nucleated cells from the blood of healthy donors, usually through CD3 and CD19 depletion, helps isolate a sufficient number of NK cells, and then usually through cytokines (for example, IL-2 or IL before infusion) -15.

Although the clinical results for hematopoietic malignancies (mainly AML) are encouraging, the clinical response has been targeted at patients and it is difficult to predict based on preclinical in vitro studies.

The fourth and fairly recent source of NK cells is iPSC-derived NK (iNK) cells. iPSC-derived NK cells have become an ideal source of ready-made CAR-NK cell products due to their unlimited proliferation potential. In contrast, transduction efficiency plays an important role in the manufacture of CB or PB-derived CAR-NK cells, and only one CAR-induced iPSC cell is needed to produce universal ready-made CAR-NK cell products.

However, iPSC-derived NK cells are still in their infancy, and many challenges still need to be overcome in order to produce ideal off-the-shelf products. iPSCs are usually derived from non-hematopoietic cells, such as fibroblasts. The iNK cells produced have an immature phenotype, characterized by low CD16 expression, high NKG2A expression, and lower KIR expression than PB NK cells.

This raises the question of how to maintain and release their cytolytic potential after encountering target cells, which can be solved by expressing CAR constructs.

Similar to NK-92 cells, genetic engineering of iNK cells to express surface proteins that they lack (such as CD16) is a potential way to address current limitations. Although their proliferation capacity is unparalleled, the problem that persists after infusion still needs to be solved before the true potential of iPSC-derived NK cells can be used [75].

Therefore, the product not only solves the limited durability, but also solves the problem of low expression of CD16 in iNK cells, and puts the combined immunotherapy into practice. The promising preclinical results from in vivo studies of humanized mice with CD19+ lymphoma paved the way for the recently listed Phase I clinical trial (NCT04245722). 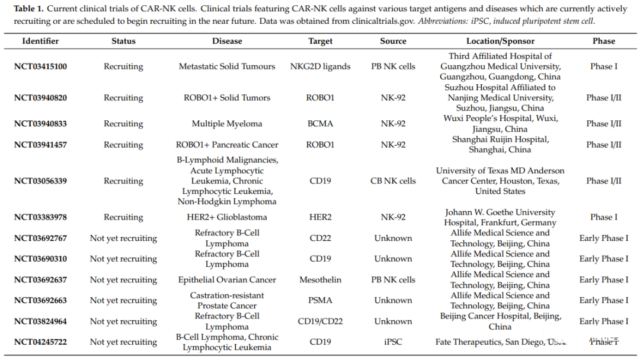