How to overcome main challenges of CAR-NK cells in cancer treatment?

How to overcome main challenges of CAR-NK cells in cancer treatment?  The successful implementation of CAR-NK cells as a therapeutic cancer is currently hindered by three main factors:

(1) the resistance of NK cells to genetic engineering;

(2) the limited proliferation potential of NK cells, and

(3) They have limited durability for infusions.

–Solving the resistance challenge of NK cells to genetic engineering–

In order to improve the transduction efficiency of NK cells that are highly resistant to viruses, polypropylene is usually used, which is a cationic polymer that promotes virus entry. Another option is Retronectin (a truncated fibronectin), which works by co-localizing with the virus on the cell surface. Vectofusin-1 is a short cationic peptide with a powerful transduction enhancer effect. It was originally found to greatly enhance the lentiviral transduction effect of hematopoietic stem cells and has been adopted in the field of NK cells.

The disadvantage of using electroporation to obtain CAR expression is the resulting transient expression because the construct cannot be stably integrated in the DNA. The surface expression range of CAR constructs on primary NK cells can be 3-5 days before the loss of expression, which greatly shortens the treatment time window. Therefore, electroporation is not a feasible method for genetic engineering to stabilize CAR-NK cell products.

An alternative method of non-viral transduction currently under investigation is the use of transposons. The two main methods most commonly used, piggyBac and Sleeping Beauty (SB) transposon systems, are currently clinically testing SB-based CAR vectors. SB is originally derived from fish, but still retains its activity in the human genome. It consists of two parts: an SB transposase that mediates cutting and pasting, and a DNA vector flanked by terminal inverted repeats (TIR), to which the transposase can be combined to mediate its almost random integration into the genome . This method can transduce genes greater than 100 kb in length, making it an attractive and more efficient option for CAR integration.

Minicircle is a DNA plasmid without a bacterial backbone. Compared with traditional plasmids, it has been proven to have higher integration efficiency. Compared with DNA, the advantage of using transposase mRNA is the short half-life during transfer. DNA transposons have the ability to integrate into DNA, but are unstable and may relocate in the presence of transposase.

In order to achieve stable integration, it is advantageous to retain transposase expression within a limited time frame, allowing vector integration but preventing further remobilization at a later time point. In addition, it eliminates the possibility of a highly active transposase permanently integrating itself.

In addition to the potential remobilization of the integrated vector, another limitation of the use of transposon for CAR transduction is the introduction of a large number of copies of the CAR construct per cell. Plasmid-based strategies usually result in 8-20 insertions per cell, while the new soluble form of SB transposase produced results in only 2-12 insertions per cell. This may lead to the possibility of over-activation and depletion of NK cells, similar to the AICD observed in T cells. Nevertheless, transposon-engineered CAR-NK cells are a promising alternative method that can achieve stable expression without viral integration.

The previously discussed transduction methods rely on vector integration without specifying the integration site. The possibility of integration and subsequent destruction of essential survival genes or tumor suppressor genes can be harmful and dangerous for clinical products. Compared with similar methods such as transcription activator-like effector nuclease (TALEN) or zinc finger nuclease (ZFN), the discovery of the CRISPR/Cas9 system opens up the possibility of highly targeted gene integration. 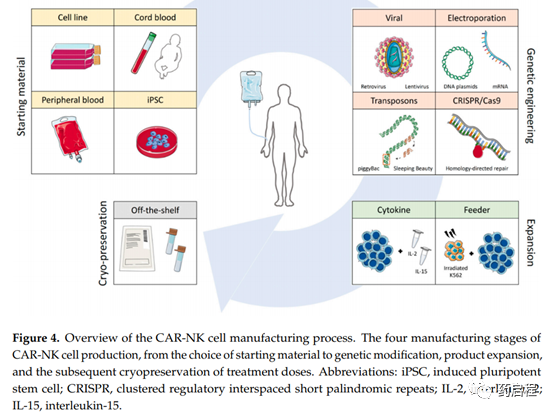 –Solving the challenge of limited proliferation potential of NK cells–

1. Amplification based on cytokines

Subgroups of immature NK cells are most receptive to cytokine input and have the highest proliferation capacity, while subgroups of mature NK cells are conducive to receptor-mediated import and have reduced proliferation capacity. Therefore, high doses of cytokines cause the NK cell population to tilt toward a more naive phenotype, but also increase the transcription of effector molecules, including granzyme B and perforin.

Amplification schemes that rely only on cytokine input have limited fold expansion and usually induce cytokine dependence in the expanded cells. Addiction to super-physiological levels is the main problem of adoptive cell therapy, because cells undergo a large amount of cytokine withdrawal during infusion, which severely limits their persistence in the body and thus limits the therapeutic window.

It has been proven that the use of IL-15 to expand primary NK cells in vitro can lead to dose-dependent cytokine addiction, which is related to the degree of proliferation.

These cytokine-addicted NK cells are very prone to induce apoptosis after IL-15 withdrawal, which is related to the changes in the expression of BCL-2 and BIM. BCL-2 and BIM are the main anti-apoptotic/pro-apoptotic in circulating NK cells Dead element. Therefore, cytokine addiction needs to be considered when infusing expanded primary NK cell products. One possible strategy is to gradually reduce the cytokine concentration before infusion.

Genetically engineered feeder cells that express specific surface ligands to help NK cell expansion have been developed. These include membrane-bound cytokines, such as IL-15, IL-18, and IL-21, and ligands that activate receptors expressed on NK cells, such as 4-1BBL, HLA-E, and OX40L.

Although HLA-E expression modified 721.221 cells (721.221-AEH) have been used as a method to preferentially expand adaptive NKG2C+CD56dim NK cells from a large number of NK cell populations, K562 cells expressing 4-1BBL have been used in general Increase NK cell expansion and increase vitality. Combining K562-4-1BBL with IL-15 and IL-21 support resulted in excellent amplification, reaching 105-fold amplification in 4 weeks, due to IL-21-induced increase in telomere length , Extending the proliferation ability of NK cells. In addition, the activation of STAT5 and STAT3 seems to be beneficial to the proliferation of NK cells.

–Solve the challenge of NK amplification in vivo–

Evidence from clinical trials of adoptive cell therapy usually fails to detect the presence of infused NK cells within 1-2 weeks after infusion. Although the short lifespan of NK cells contributes to their safety in the ACT environment, it also significantly reduces the therapeutic window and prevents any long-term monitoring of the infused cells.

One option to extend the therapeutic window is to give systemic cytokine support to induce the proliferation of infusion products in vivo. Although IL-2 and IL-15 have been tested in clinical trials, both are associated with serious side effects. Fever, chills, myalgia, and capillary leak syndrome have been observed after systemic IL-2 treatment, which also has undesirable side effects that support the expansion of regulatory T cells (Treg).

IL-15 does not promote the expansion of any unwanted bystander population, but has been shown to cause neutropenia when administered systemically. In addition, systemic IL-15 therapy only induces NK cell expansion during the treatment period, effectively eliminating it as a method of inducing long-term persistence.

Although there is room for improvement in optimizing the persistence of CAR-NK cells, the long-term persistence observed with CAR-T cells is unlikely. Consistent with ACT that activates NK cells, CAR-NK cell therapy has great potential as a bridging therapy for patients with refractory and recurrent malignant tumors.

Only by solving these challenges can CAR-NK products be successfully sent to clinical trials.