Examples of non-viral vectors include transgene integration via a transposon system and transient CAR mRNA transfection.

The high T cell infectivity of the γ-retroviral vector avoids the need for concentration and purification of virus particles, because the conditioned medium filtered from the virus-producing cells usually has sufficient virus titer to efficiently perform T cells divert. Indeed, the transduction efficiency of T cells using CAR-encoded retroviral vectors can usually reach 95-99%.

Here, we describe a protocol for the generation of CAR T cells transduced using MMLV-derived gamma retroviral vectors. The expression of the transgene in this vector is driven by the enhancer/promoter region in the long terminal repeat (LTR) of the virus.

(1) the generation of γ retroviral vectors and 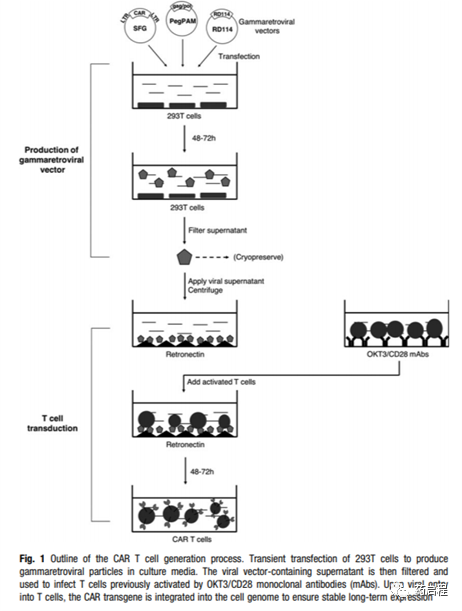 The retroviral particles were transfected by the 293T cell line, which was transfected in the following way:

The latter two plasmids lack packaging signals, so these genes are not integrated into the virion, making the γ-retroviral particles unable to replicate.

The virus particles are assembled in 293T cells, receive all three plas mids, and secrete into the culture medium. The supernatant is then filtered and used to infect activated T cells.

After the virus particles enter the dividing T cell, the viral transgene is reverse transcribed into DNA and integrated into the T cell genome to ensure stable long-term expression. Using this method, the transduction efficiency of most T cell donors usually exceeds 85%, but it can be reduced if necessary.

After the virus is harvested, tested and released, it enters the transduction link of CAR-T cells. Specific steps are as follows:
(1) On day 0, use OKT3/CD28 to activate T cells;
(2) Day 1: Replenish cytokines (optional);
(3) Day 2: Transduction;
(4) Day 3 and beyond: Maintain T cell expansion and confirm transduction efficiency
(5) Harvest CAR-T cells.

(these notes are very matched with our laboratory’s experience, so I won’t list them one by one)

1) PBMC can be freshly separated or melted. If using thawed PBMC, wash 1 volume of PBMC once with 9 volumes of complete T cell culture medium, and then resuspend at a concentration of 1×106 cells/ml to remove DMSO.

2) The addition of cytokines promotes the proliferation of T cells, which will lead to better expansion and higher transduction efficiency, but may also accelerate terminal differentiation. In addition, delayed cytokine supplementation may inhibit the expansion of bystander effector cells (such as NK cells).

3) The volume of virus supernatant per well can vary from 0.5 ml to 1.5 ml, depending on the virus titer, the number of T cells to be transduced, and the required transduction efficiency. More is not necessarily better-if the multiplicity of infection (MOI) is too high, the viability of T cells will decrease.

4) RD114 pseudotyped virus particles gradually lose their infectivity at room temperature. The virus supernatant should be used fresh or shortly after thawing. If co-transduction with two different types of γ-retroviral vectors, add the same volume (0.5–1.5 ml) of the two viral supernatants to the same well. Alternatively, tandem transduction of one of the viral supernatants can be performed on the 2nd and 3rd day after T cell activation.

5) High transduction efficiency is not always desirable, because high levels of CAR expression may enhance tonic signaling, which may be toxic to T cells [7]. Lowering MOI (increasing cell density and/or adding less virus supernatant) or transducing cells on the 3-5 days after activation can reduce transduction efficiency.

6) Wait at least 4 hours until the virus entry is complete, then change the medium and transfer the cells to the tissue culture-treated plate.

7) Retronectin may inhibit the proliferation of T cells, so it is necessary to transfer the cells to tissue culture-treated plates in time to ensure optimal expansion.

The emergence of non-viral integrative vectors (such as the “Sleeping Beauty” (SB) transposon) provides an alternative to non-viral production processes, thereby simplifying the production of therapeutic products. Through the use of highly active forms of SB transposase such as SB transposase, the transgene integration efficiency and expression are comparable to viral vectors [8], and effective genetic modification of T lymphocytes is also feasible [9, 10].

Reports indicate that SB has the characteristics of random integration, and usually integrates GOI into a site rich in TA dinucleotides [11, 12], which is safer than viral transduction. These characteristics have promoted the development of SB-mediated gene therapy and its application in the generation of CAR-T cells. A recent paper described the preliminary results of SB-modified CAR-T lymphocytes in the treatment of B-cell malignancies[ 14].

Generally, electroporation is a method of choice for the delivery of the two components (transposon vector containing GOI and vector for transposase expression) constituting the SB transposon system. Under normal circumstances, the bilayer lipid membrane protects cell homeostasis by controlling the flow of molecules, but certain interferences can change the barrier, such as ion concentration, detergent use, and changes in potential.

The hyperpolarization of the membrane is reversible, as shown in the experiment, indicating that electrical breakdown does not change the voltage and current of the membrane [16].

Figure 1 shows a schematic diagram of the gene modification of T lymphocytes by electroporation through the SB system. 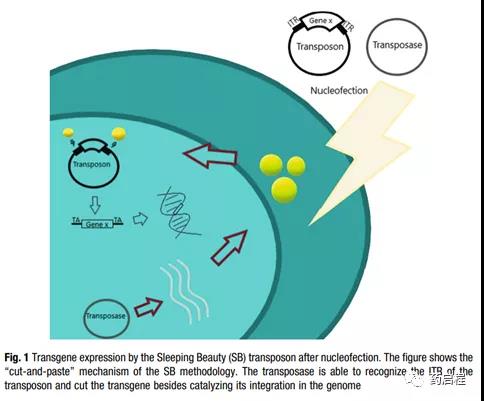 The specific steps include:

(3) T cell expansion, on the 8th day after electroporation, count the obtained T cells. Stain aliquots to assess CAR expression and lymphocyte subsets;
(Note: In order to obtain maximum yield, T cells can be expanded for 8 days. However, a shortened expansion period can reduce T cell differentiation, and it has recently been shown to increase T cell effector function [19]. Therefore, the best expansion The period can be determined by the researchers according to their needs and research.)

The most preferred method for genetically engineering T cells to express selective CAR is to use lentivirus, γ-retrovirus or adenovirus for viral transduction.

Generally, viral gene transfer can stably integrate the gene of interest into the host genome, however, this is accompanied by insertional mutagenesis and long-term carcinogenic risks [9].

Or for these reasons, other transfection platforms have been proposed, such as the development of in vitro transcription mRNA (IVT-mRNA). Transient CAR transfer via IVT-mRNA, mainly via electroporation, is considered to be a safer method for patients. It provides a reliable and easy-to-implement method [10], and has recently obtained its first clinical trials. Pre- and clinical data [11–15].

Compared with other non-integrated methods (such as DNA plasmids), another advantage of IVT-mRNA is its high protein expression efficiency [24]. Due to the large size of the chemical compound plasmid DNA, the cell transfection effect is poor.

IVT-mRNA technology is beneficial to the fact that by directly transporting IVT mRNA into the cytoplasm, the mRNA can be immediately translated into the corresponding protein. On the contrary, the DNA plasmid preferably enters the cell nucleus during the mitosis step, so it has an advantage in dividing cells and can express proteins more efficiently.

Regarding recombinant protein therapeutics, complex purification procedures are required, and the expected cost of producing Good Manufacturing Practice (GMP) grade IVT-mRNA for clinical research may be five to ten times lower than protein therapeutics because it is a cell-free system. In fact, the use of IVT-mRNA is host-driven protein production, with appropriate post-translational modifications, it is difficult to produce in bacteria, widely used heterologous systems, for the production of recombinant proteins [25].

Today, IVT-mRNA technology has been optimized to eliminate stability issues and achieve excellent regulation of the amount and duration of protein production. Modifications include optimization of transportation methods, transfection factors, chemical modification of structure and sequence modification of IVT-mRNA.

Regarding the transfection method used for IVT-mRNA to enter the cytoplasm to transiently express CAR molecules on target T cells, the most common method is electroporation, which has successfully demonstrated anti-tumor activity in many studies [13,14,42– 44]. Using IVT-mRNA engineered CAR T cells, although these CARs have a short half-life, they can still safely control potential non-tumor target toxicity and the spread of epitopes and mediate anti-tumor active T cells [11].

In a clinical trial that uses IVT-mRNA technology to develop CAR treatments: