American Cancer Association released: Anti-cancer strategy in 2030.  The American Cancer Society (ACS) has released the first-level tumor fight plan for the next 10 years, called the “2030 Blueprint for Cancer Prevention and Mortality Reduction”, and related articles are published in the world’s highest impact factor journal CA!

The article analyzed in detail the changes and causes of cancer mortality in the United States during the 80 years from 1930 to 2010, and planned the direction for future work to reduce cancer mortality. 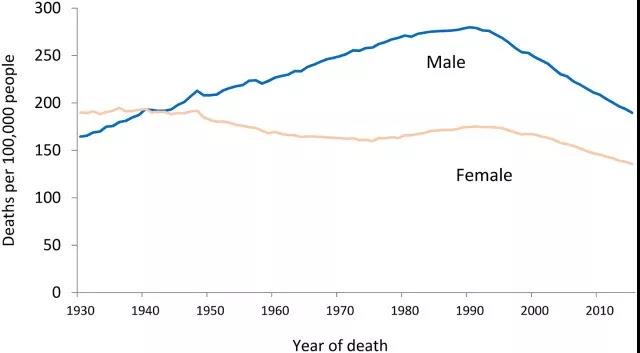 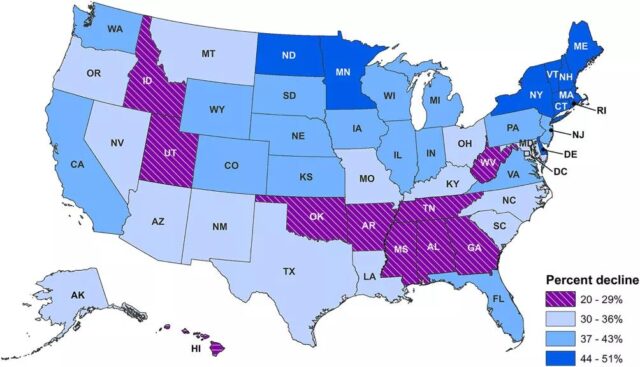 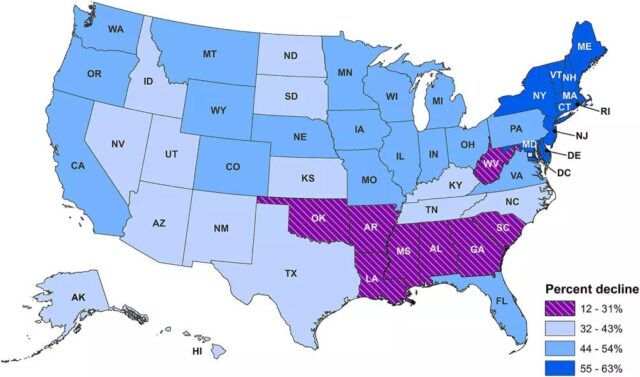 The country’s decline in colorectal cancer mortality from 1980-82 to 2013-15. Data source: National Center for Health Statistics.

Top 10 anti-cancer strategies in the next ten years!

1. Keep away from 11 pathogens

Some viral infections (such as HPV, HIV and hepatitis B virus) also increase the risk of cancer.

At present, a total of 11 pathogens have been identified as carcinogenic by the International Agency for Research on Cancer (IARC), including:

For common infections in general life, we recommend:

Reminder: There are no obvious symptoms in the early stage of HPV infection. After cervical lesions, there may be sexual contact bleeding, increased leucorrhea and peculiar smell, prolonged menstrual period, increased menstrual volume, etc. Seek medical attention in time.

Prevention: Wash your hands before meals, try not to feed food, especially do not feed young children orally. Can be divided into meals or serving chopsticks, and the tableware is often disinfected.

Reminder: If patients have symptoms such as bad breath, pantothenic acid, stomachache, etc., they should be screened for gastroscopy and HP infection.

Prevention: Vaccination against hepatitis B and C vaccine; go to regular medical institutions when donating blood or blood transfusion; do a premarital and pregnancy checkup; eat less raw freshwater fish and shrimp.

Reminder: Patients with chronic hepatitis B and C may have symptoms such as fatigue, loss of appetite, and indigestion, which must not be underestimated.

Sun exposure is a good way to supplement vitamin D, but we refuse to expose it!

Medical ionizing radiation is associated with a variety of cancers, and CT has the greatest risk. After a 40-year-old man and woman undergo a single CT coronary angiography, their lifetime cancer risk is approximately 1/600 and 1/270, respectively, but the risk of head CT is much smaller (1/11080 and 1/11080, respectively). 1/8100).

However, elderly people are at a low risk when undergoing these tests.

▍① Radon: A radioactive gas widely present in nature. Building materials are the most important source of indoor radon, such as slag bricks and natural stones used in decoration, as well as ceramic products such as tiles and sanitary ware.

Before you renovate your new home, it is recommended to ask a professional testing agency to conduct an indoor environment test. According to the test results, you can decide whether you can move in. If the pollution is not serious, it is best to ventilate for about 6 months before moving in. More ventilation in the home can reduce the concentration of indoor radon and formaldehyde.

5.  Quitting smoking is the top priority!

Tobacco control is the “top priority” for cancer prevention! Since 1991, the cancer death rate in the United States has decreased by 26%, and more than half of this has been attributed to the decline in smoking rates.

▍① Quitting smoking is beneficial to people of any age.

▍③ If you quit smoking before the age of 40, you can regain 9 years of life.

In 1987, the International Agency for Research on Cancer (IARC) classified alcohol as a carcinogen for the first time. Excessive drinking can cause adverse effects in many aspects of the body, which are related to at least 7 types of cancer (British Science Monthly “Addiction”).

What is the concept of 25 grams of alcohol? Approximately, remember:

▍Liquor: no more than 1 tael each time

▍Beer: no more than one bottle at a time

▍Red wine: limited to one red wine glass at a time

Evidence shows that even small amounts of alcohol can increase the risk of certain cancers, including breast cancer. Therefore, in order to prevent cancer, drinking alcohol is not recommended.

Bacon, ham, sausages, and hot dogs are all listed as the first group of carcinogens by the World Health Organization. Eating processed meat increases the risk of colorectal cancer by 18%. Red meat can also shorten a person’s lifespan and increase the risk of colon cancer, especially when the meat is grilled or grilled, or even slightly burned. Although the carcinogenic risk of red meat is far less than that of smoking, reducing your intake of red meat and restricting your consumption of processed meat will only reduce your risk of cancer.

Eating a variety of foods every day-fruits, vegetables, grains, protein and dairy products-eat a lot of food every day. It also means observing your fat, fat, sodium and sugar intake. The more you can avoid getting fat, the better. Throughout your life, maintaining your healthy height and weight can reduce your risk of heart disease, diabetes and cancer. Start eating healthy today!

Physical exercise not only helps to lose weight or keep in shape, but it also has a preventive effect on cancer. Exercise seems to lower hormone levels, improve our immune system function, lower insulin and insulin-like growth factors, and reduce body fat.

Studies have shown that people who take at least 30-60 minutes of moderate to high-intensity physical exercise a day have a lower risk of cancer, especially breast and colon cancer. In addition, the incidence of several other cancers has also declined, including prostate cancer, lung cancer and endometrial cancer.

In order to prevent cancer, the American Sports Guidelines recommend:

▌Adults should do at least 150 minutes of moderate-intensity aerobic exercise (such as brisk walking) every week;

▌Or 75 minutes of high-intensity exercise (such as jogging);

For most cancers, if they can be detected and treated early, survival will be greater. The following cancer screenings should be performed regularly: