Alcohol and Cancer-American Society of Clinical Oncology.  To reduce the risk of cancer, reduce alcohol consumption.

Whether at home or abroad, wine is a good friend of mankind. The feelings of “Song of wine, the geometry of life”, “You must be happy in life, don’t make the golden bottle empty to the moon”, the boldness of “Hu’er will exchange fine wine and sell the eternal sorrow with you”, and “Dongli puts wine after dusk”, the thinner woman, “I don’t know where to wake up tonight”, the sentimental parting prodigal son…

Wine can help both happiness and sorrow. It can be said that without wine, human life seems to be much more prosaic.

Recently, the American Society of Clinical Oncology issued a statement on alcohol, which caused a wave of waves with one stone.

ASCO speaks for the first time: Alcohol and Cancer

The American Society of Clinical Oncology (ASCO) brings together the top oncologists in the United States and is an authoritative organization for clinical oncology.

Looking back at many years of research, alcohol has been a clear risk factor for multiple cancers.

Although the relationship between alcohol and cancer is nothing new, in view of the insufficient awareness of the public and even doctors, and the fact that excessive drinking has gradually become a social problem, and alcohol is a controllable risk, ASCO solemnly issued a document for the first time in recent days to arouse public attention and promote Public health interventions to limit alcohol consumption and reduce the risk of cancer.

This statement published in the “Journal of Clinical Oncology” on November 7 has been widely reported by various media, including the New York Times and Time Magazine, and many media have dedicated articles to discuss it.

This article excerpts and discusses some of the key points in this statement for readers.

The relationship between alcohol and cancer

After long-term and in-depth research, ASCO believes that alcohol is a clear risk factor for cancer.

-5.5% of new cancers and 5.8% of cancer deaths worldwide can be directly attributed to alcohol.

-Alcohol is causally related to oropharyngeal cancer, esophageal cancer, hepatocellular carcinoma, female breast cancer and colorectal cancer, which means that alcohol can cause these cancers.

-Alcohol may also be related to pancreatic cancer, stomach cancer and lung cancer.

-As more evidence emerges, the list of alcohol-related cancers will continue to increase.

Of course, the more you drink, the higher the risk. This is a nearly linear dose-response relationship.

ASCO recommends to reduce alcohol consumption in order to reduce the risk of cancer. If you don’t drink, don’t start.

In other words, ASCO recommends “restrict alcohol consumption”, which is different from the “total abstinence” recommendation for tobacco.

What is moderate drinking?

The definition of moderate drinking varies widely across the world. The American Heart Association, the American Cancer Society, and the U.S. Department of Human Health Service have consistent recommendations on alcohol consumption, but many people do not know that there is such a recommendation and tend to drink excessively.

In the United States, a standard alcoholic beverage contains 0.6 ounces (approximately 17.7 milliliters) of pure alcohol (see the figure below). 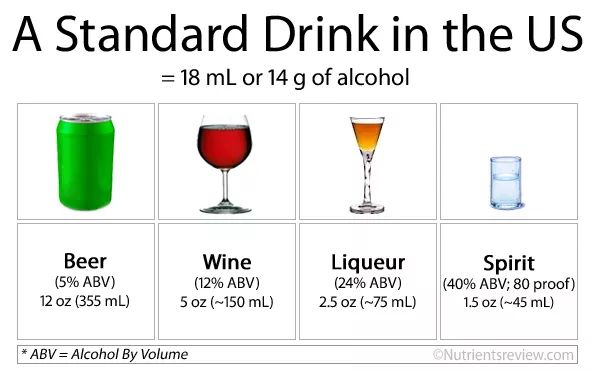 Generally speaking, this amount of pure alcohol is equivalent to:

What is excessive drinking?

Female, drinking 4 or more drinks at a time.

Men, drink 5 or more in a single drink.

Men, drink more than 15 servings of alcohol a week.

3. Pregnant women or people under the age of 21 drink any amount of alcoholic beverages.

Most people who drink excessively are not alcoholics or alcohol dependents.

To reduce the risk of cancer, reduce alcohol consumption. If you don’t drink, don’t start.

Types of alcohol and cancer

Is beer, wine, or liquor different from cancer?

The risk of alcohol and cancer has nothing to do with the type of alcohol. In other words, for cancer, alcohol is alcohol, and there is no good or bad.

Many people believe that red wine can promote cardiovascular health, and some studies support this claim.

In fact, there are many other confounding factors in these studies, and these so-called benefits need to be further confirmed. Experts do not recommend alcohol to prevent certain diseases.

People who smoke and drink at the same time have a significantly higher risk of cancer than those who simply drink or smoke, especially for oropharyngeal and upper respiratory tract cancers.

Fine wine and cigarettes are equivalent to the call of cancer, stay away from it.

The effect of alcohol on cancer patients

Is there any benefit in giving up alcohol?

Long-term observations have found that for oropharyngeal and upper gastrointestinal cancers, people who give up drinking have a significantly lower risk of cancer than those who don’t. As for other cancers, the current research data is limited and there is no conclusion yet.

Education for doctors and the public

A recent ASCO survey of more than 4,000 adults found that as many as 70% of adults do not know that alcohol is a risk factor for cancer (most people do not realize that obesity is also a risk factor). This is one of the reasons that prompted ASCO to solemnly publish the document.

There are various popular sayings that moderate drinking, especially red wine, has certain health benefits, but in fact, the real benefits of drinking have not been proven. Conversely, studies have found that even small amounts of alcohol may increase the risk of certain cancers.

Ordinary people do not understand that there is excuse. Why do doctors need to be re-educated?

Many doctors have insufficient understanding of the relationship between alcohol and cancer risk, lack of relevant knowledge, and do not pay enough attention to it. Naturally, they will not help patients to reduce risks.

A study found that about 14% of American doctors have problems with excessive drinking for some time in their lives. This number is no different from that of ordinary people.

To reduce the risk of cancer, reduce alcohol consumption.

If you don’t drink, don’t start.

Following the above principles, life with wine can still be very beautiful.