740000 people worldwide suffer from cancer in 2020 due to Alcohol.  Although many people can’t resist the temptation of alcohol, you still need to know that drinking is only a momentary pleasure, but the price may be that you will be unhappy in the future.

Because alcohol can cause cancer through a variety of biological pathways, including changes in DNA, protein and lipids, damage to the carcinogenic metabolite of ethanol, acetaldehyde, oxidative stress, and changes in the regulation of sex hormones.

In the past ten years, the WHO and health institutions around the world have found quite a lot of strong evidence that drinking is related to a series of injuries and diseases, including cancer, and is related to the upper gastrointestinal tract (mouth, pharynx, larynx and throat). There is a causal relationship between esophagus) cancer, colon cancer, rectal cancer, liver cancer, and female breast cancer.

Cancer caused by alcohol consumption is an important risk factor for the global burden of disease. The point is that even a small amount of alcohol can greatly increase the possibility of developing several types of malignant tumors at the same time. In addition, alcohol can also be used as a solvent for other carcinogens (such as chemicals in tobacco) to indirectly promote the development of cancer.

On July 14, 2021, the international research team led by the International Agency for Research on Cancer (IARC) of the World Health Organization published a titled: Global burden of cancer in The Lancet Oncology, the top journal of oncology. 2020 attributable to alcohol consumption: a population-based study research paper.

The study announced the global burden of cancer caused by drinking in 2020: of all new cancer cases, more than 740,000 can be attributed to cancers caused by drinking, of which more than 76% are male patients; esophageal cancer, liver cancer and breast cancer Has the most cases. East Asia, Central Europe and Eastern Europe have the highest incidence.

The results of the study emphasize the need to adopt effective policies and interventions to raise awareness of the cancer risks associated with drinking in order to reduce the burden of cancer caused by alcohol.

Harriet Ramgay, a researcher with the International Agency for Research on Cancer, the leader of the study, said: “This observation shows that even a small amount of alcohol can significantly increase the incidence of tumors. By making some changes to public drinking behavior, it may reduce the burden of cancer.” 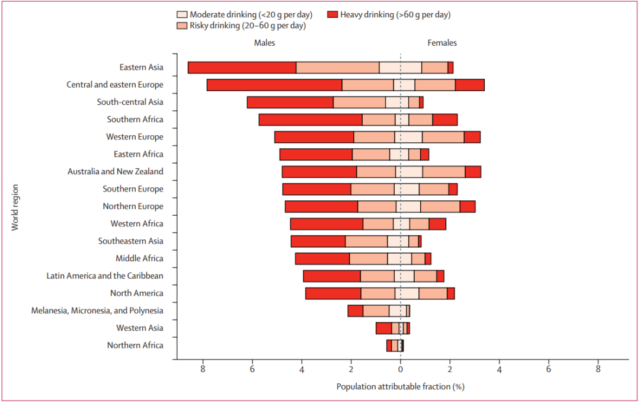 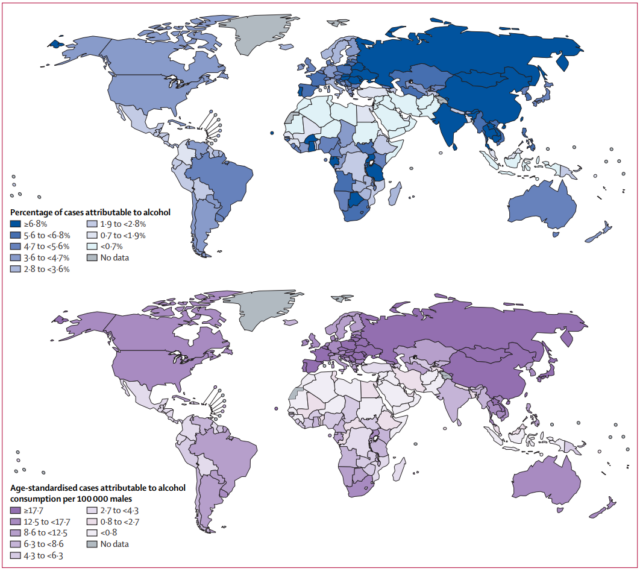 Male population distribution of cancer cases caused by alcohol in 2020 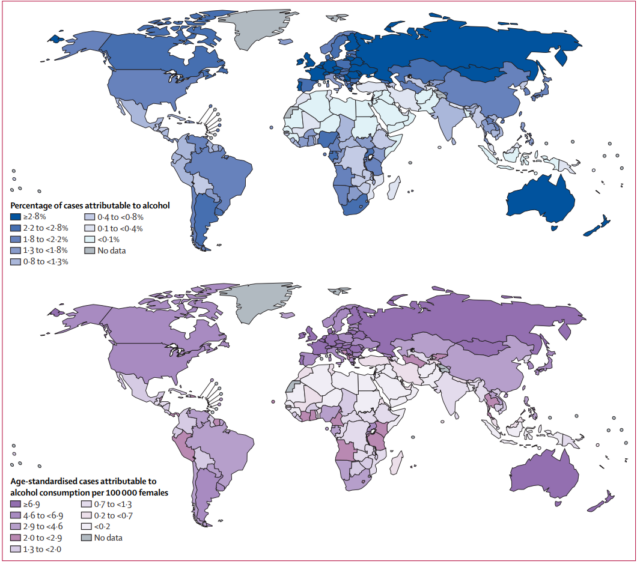 There is evidence that people who carry the acetaldehyde dehydrogenase 2 (ALDH2*2) allele have a significantly increased risk of upper respiratory tract cancer and gastric cancer. It is estimated that 28% to 45% of East Asian populations are carriers of the ALDH2*2 polymorphism. Therefore, in this study, the higher proportion of alcohol-related cancers in the East Asian population may also be due to the increased risk of this genetic variation.

After further stratifying alcohol consumption into increments of 10 grams per day, people who drank more than 10 grams per day contributed 4,1300 cancer cases, of which 16,700 were men and 24,600 were women. 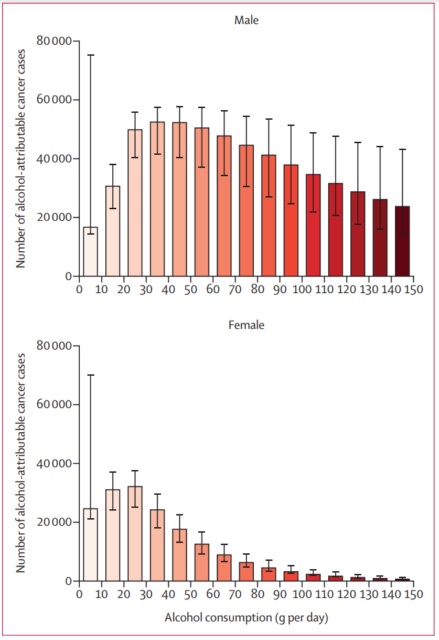 In the sensitivity analysis, when gastric cancer and pancreatic cancer were included, the total number of cancer cases caused by alcohol reached 808,700.

The researchers said that because only cancer sites with sufficient evidence of causality were included, the results of this study are only conservative estimates. In addition, one limitation of the study is that it did not consider the synergy between alcohol and tobacco. For most upper respiratory and digestive tract cancers, this is an obvious interaction.

In short, this study found that drinking alcohol can cause a heavy burden of cancer, and even a small amount of alcohol can significantly increase the risk of cancer. Researchers hope to avoid this burden through cost-effective policies and interventions to increase awareness of alcohol risks and reduce overall alcohol consumption. It is expected that by 2030, alcohol consumption in many parts of the world will increase, so actions must be taken to reduce the avoidable burden of cancer caused by alcohol.