200 million American people may suffer permannet damage of PFAS.  Once the substance enters the human body, it can hardly be excreted by metabolism! You may be in contact with these harmful substances every day!

This year’s American Diabetes Association (ADA) annual meeting has been held in the past few days, the “medical community” has introduced to you the “how to eat”, “when to eat”, “when to eat” and so on shared by the big guys on ADA. Diet methods that help control blood sugar and improve metabolism. In such an annual top academic event, it is of course impossible to lack academic sharing such as “what can not be eaten”, “what are the pits” and “how to avoid falling pits”.

Professor Sung Kyun Park from the University of Michigan shared some common substances harmful to metabolism in life at the meeting, and some of them are even traps that we usually hardly pay attention to.

Professor Sung Kyun Park first introduced us to a harmful substance that is very common in life and may be on hand-perfluorinated and polyfluoroalkyl substances (PFAS). PFAS refers to organic compounds containing at least one perfluorinated carbon atom. PFAS is a large category, containing a variety of compounds, such as perfluorooctanoic acid [PF (that is, containing at least one -CF2- or -CF3- aliphatic chain structural unit) OA], perfluorooctyl sulfonic acid (PFOS) and so on.

PFAS exists permanently. Once it enters the human body, it can hardly be excreted unless extreme measures are used. Professor Park listed the half-life of common PFAS in the human body- 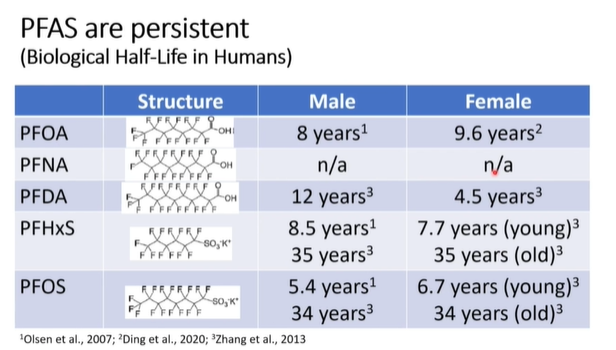 As can be seen from the figure above, the half-lives of major PFAS are all measured in years, and can even exceed 10 years. In other words, once ingested, after the half-life does not mean everything is fine, it just decays by half.

Professor Park introduced that PFAS is widely used in our lives due to its durable properties, stain resistance, heat resistance, oil resistance and other properties, including non-stick cookware, waterproof fabric clothing (and other fabrics), and furniture in the picture below. Anti-stain surface layer, food packaging box, daily chemical packaging box and some fireproof materials. 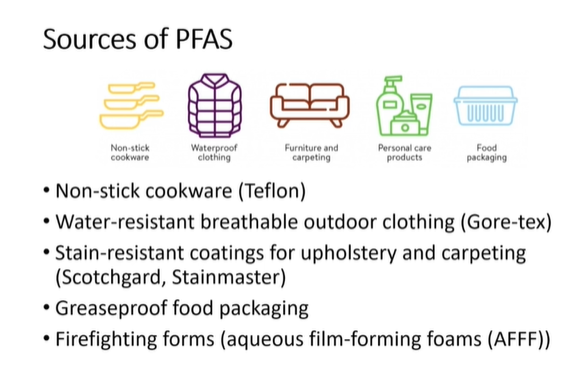 In addition, some fast food packaging also contains a lot of PFAS, and it was even evaluated by the Independent as “Packaging is more harmful to your health than fast food itself”-this is not a joke, the harmful effect of PFAS on metabolism is no less than that of the picture. In this kind of ultra-processed high-carbon fast food. 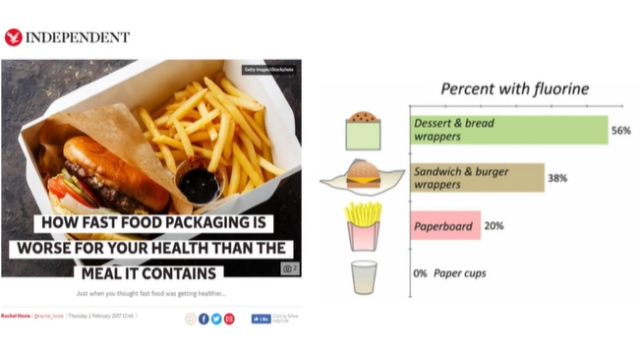 The above picture shows that the packaging paper shell of cakes or bread contains 56% of PFAS, and the paper used to wrap hamburgers or sandwiches (requiring oil-resistant properties) contains 38% PFAS, which is similar to the cardboard packaging of French fries. The content is 20%, and only the unpretentious paper cups without any tricks do not contain PFAS.

Maybe you would say: “But I don’t eat pots, wrappers, or takeaway boxes. Why is PFAS more harmful to me?”

Because PFAS is easy to be ingested, let alone the materials used to hold food will contaminate the food, even waterproof and stain-proof fabrics may also cause you to ingest it.

The known toxic effects of PFAS on the human body include:

So, in terms of metabolism, what are the harms and effects of PFAS? Professor Park introduced that PFAS has a direct effect on metabolism. It directly interferes with the ligands and receptors of the signaling pathway in the metabolic signaling pathway. As a result, PFAS can increase the proliferation and differentiation of adipocytes, and PFOS and PFOA also have a dose-dependent effect on fat production. A study published in JAMA Network Open in 2018 observed a correlation between PFAS and weight gain.

At this conference, Professor Park announced the results of his latest clinical study (not yet officially published). The study included 1,400 middle-aged women from many places in the United States, including 13% of Chinese descent and 15% of Japanese descent. The center’s research plan measures the effects of 125 pollutants on metabolism and fertility. The results show that PFAS has a significant increase in the risk of diabetes in all middle-aged women included in the study.

At the same time, Professor Park added that short-chain PFAS is also not safe. It can also cause confusion in human fat cell metabolism and enhance fat cell differentiation.

There is one more important thing-water.

PFAS pollution of water sources, especially drinking water, has become a global problem, and even a serious problem in some areas. Professor Park introduced that in the United States, 200 million people are drinking drinking water contaminated by PFAS!

And this problem is not unique to the United States. All industrial countries are faced with this problem, but the degree is different.