EJCN: Obesity will worsen the harmful effects of alcohol on liver diseases

A few days ago, a research report titled “Joint associations of adiposity and alcohol consumption with liver disease-related morbidity and mortality risk: findings from the UK Biobank” was published in the international journal European Journal of Clinical Nutrition, from the University of Sydney and other institutions Through research, scientists in Australia said that the National Health and Medical Research Council (NHMRC, National Health and Medical Research Council) drinking guidelines may need to pay more attention to the growing waist circumference of the Australian population. 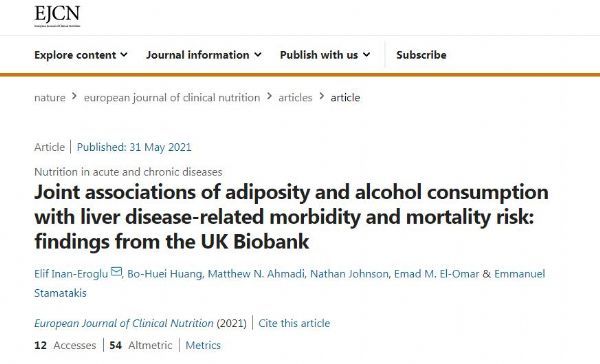 In this study, researchers analyzed the medical data of nearly 500,000 people and found that being overweight or obese greatly amplifies the harmful effects of alcohol on liver disease and patient mortality. Researcher Professor Emmanuel Stamatakis said that compared with people who drink the same level of alcohol within a healthy weight range, people who are overweight or obese may have a higher risk of liver disease. Even people who drink under the drinking guidelines have a 50% higher risk of liver disease in people who are classified as obese.

Subsequently, the researchers used data from the British biological sample bank, and the relevant research results can also be safely applied to the Australian population; according to the researcher, this study is the largest study to analyze the increase in body fat (overweight or obese) ) And the relationship between the level of alcohol consumption and the body’s future risk of liver disease. The researchers analyzed a total of 465,437 people between the ages of 40-69 and collected medical and health-related information for an average of 10.5 years of participants. The results of the study indicate that people who are overweight may need to pay more attention to drinking places. The risk of disease. And currently in Australia, about 67% of people are overweight or obese, which is obviously a problem that needs urgent attention.

In the article, the researchers analyzed relevant data from overweight/obese participants, these participants based on BMI and waist circumference, self-reported alcohol intake according to the British Drinking Guidelines, incidence of liver disease, and deaths due to liver disease. BMI is defined based on weight and height. When it exceeds 25, it is defined as overweight, and when it exceeds 30, it is defined as obesity. For waist circumference, researchers use the WHO classification standard, which is normal (female <80 cm, male < 94 cm), overweight (women> 80 cm, men> 94 cm), and obesity (women> 88 cm, men> 102 cm). Researchers use the hazard ratio (HR) to assign the level of risk. When the number is higher than 1, the risk is considered greater.

Delve into the joint association of alcohol and obesity with ALD, NAFLD, and liver disease incidence.

The researchers found that compared with participants who drank alcohol within the guidelines, participants who drank more than the British drinking guidelines: 1) The risk of being diagnosed with alcoholic fatty liver was nearly 600% higher (hazard ratio 5.83) 2) The risk of death due to alcoholic fatty liver disease is nearly 700% higher (hazard ratio is 6.94); 3) Compared with normal weight participants who consume the same level of alcohol, they are overweight or obese and drink alcohol within the alcohol guidelines Of participants had a risk of liver disease more than 50% higher. The findings of this article emphasize that drinking guidelines and doctors’ recommendations may need to consider the gradual increase in the prevalence of obese and overweight people in Australia and the compound impact on the health of the population.

The current NHMRC alcohol guidelines (the most recent update in 2020) state that healthy adults should drink no more than 10 cups of standard beverages per week and no more than 4 cups on any given day. The guidelines point out that alcohol may worsen the original health of the body, such as liver disease, hepatitis B and C, and obesity; however, it does not point out that more than one-third of the population in Australia is currently affected by obesity, nor does it Specifically, it involves the combined effects of alcohol and low-level unhealthy fat diseases (such as being overweight but not obese) on liver disease.

Researcher Stamatakis concluded that the current drinking guidelines are based on the evaluation and analysis of existing data, but future updates must take into account the risk factors of overweight or increased risk of liver disease. It may not be enough to simply mention obesity in the current guidelines. Overweight and obesity affect the health of two-thirds of the Australian population, so researchers may need to design specific drinking recommendations for this group of people. Based on the results of current research, people in the overweight range (not just obese people) should be cautious in drinking alcohol, and perhaps should aim for a level far below the NHMRC general guidelines. In summary, the research in this article provides strong evidence that overweight or obesity amplifies the harmful effects of alcohol on the incidence and mortality of liver disease.