PD-1 Inhibitor Pembrolizumab Treat patients with both HIV and cancer

If a person has AIDS and cancer at the same time, is there any rescue? The answer is: yes!

At the recent annual meeting of the American Society of Clinical Oncology, Dr. Tom Uldrick of the Fred Hutchinson Cancer Research Center in the United States announced a new study that can be used by patients with HIV and a variety of potentially fatal cancer PD-1 inhibitor pembrolizumab for treatment. 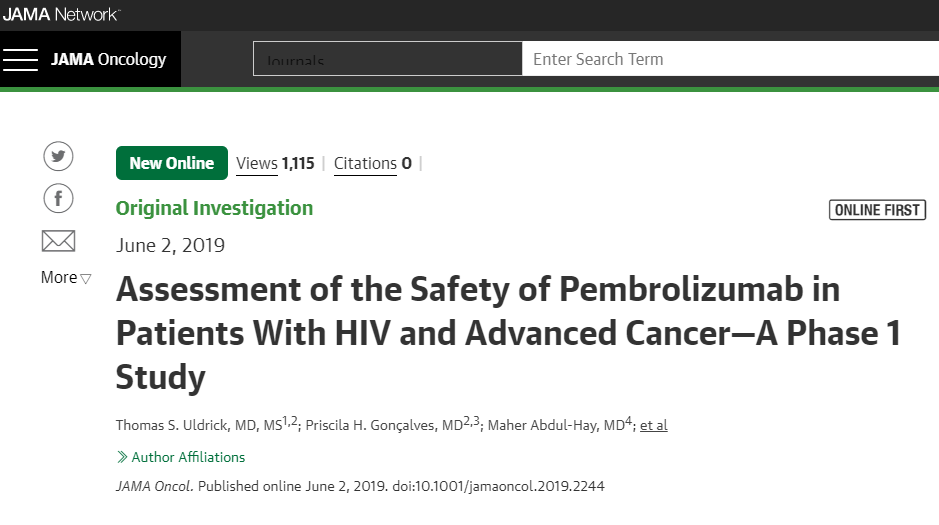 “Adverse event profile” is an indicator to measure drug safety in this study. The researchers observed whether the patients experienced gastrointestinal discomfort, skin rashes, and whether there would be a surge of additional T cells during treatment.

The results of the study show that the safety of the drug in HIV and cancer patients is similar to that in clinical trials in the general population. In almost all cases, it is safe to use in cancer and HIV patients.

Dr. Tom Uldrick believes that the findings may also be applicable to five similar drugs that block the PD-1 or PD-L1 receptors on the surface of T cells.

However, there were surprises in the study. A preconditioned patient with herpes viremia developed polyclonal herpes virus-related B cell lymphatic proliferation and died. At present, the link between the patient’s death and treatment is unclear. For this reason, the researchers warned that when using PD-1 inhibitors to treat Kaposi’s sarcoma-associated herpes virus-related multicentric giant lymph node hyperplasia, one must be highly cautious.

The researchers concluded that for HIV patients who are receiving antiretroviral therapy and whose CD4 count is above a certain threshold (100 cells per microliter of blood), PD-1 inhibitors can be considered for treatment. In the future, researchers will conduct more studies on the effectiveness of the drug