Introduction: On December 24, the New England Journal of Medicine published a landmark study: the results of a global trial showed that a drug called CC-486 can significantly improve acute myeloid leukemia over 55 years of age The survival rate of (AML) patients. Taken together, the survival rate of patients has increased by 30%.

Acute myeloid leukemia (AML) is a malignant disease of myeloid hematopoietic stem/progenitor cells. It is the most acute blood cancer in adults. Its incidence increases with age. It is mainly characterized by abnormal proliferation of primitive and immature myeloid cells in bone marrow and peripheral blood. The clinical manifestations are anemia, bleeding, infection, fever, and disease. Organ infiltration, metabolic abnormalities, etc., in most cases, the condition is severe and the prognosis is dangerous. If not treated in time, it can often be life-threatening.

This global clinical trial was led by Professor Andrew Wei of the Australian Centre for Blood Diseases of Monash University and a hematologist at Alfred Health Center, and the research team published a report entitled “Oral Azacitidine Maintenance Therapy” in the New England Journal of Medicine. for Acute Myeloid Leukemia in First Remission” research paper. 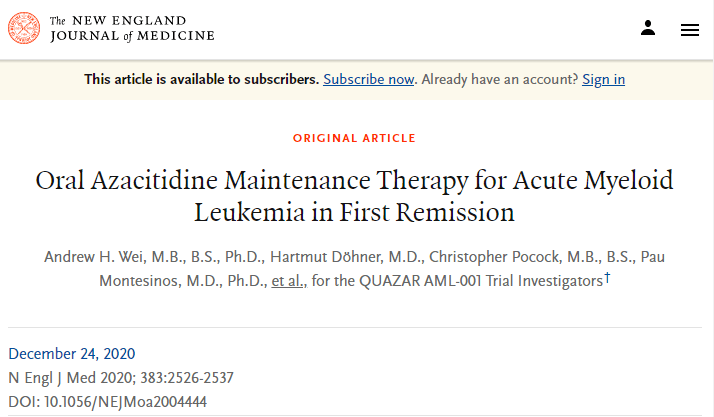 The study is a phase 3 clinical trial for AML patients over 55 years old, named QUAZAR, conducted at 148 sites in 23 countries/regions.

In the United States, approximately 20,000 people are diagnosed with AML each year. Using current treatment methods, most elderly patients will die within 2 years of diagnosis. This study shows that a drug called CC-486 can significantly improve the survival rate of patients with acute myeloid leukemia over 55 years of age.

The researchers said: “After intensive chemotherapy, the risk of AML recurrence is high, so after chemotherapy is completed, it is necessary to find new drugs to improve the patient’s prognosis.”

“Many elderly patients cannot receive stem cell transplantation, so we hope that there can be a less toxic method to reduce disease recurrence, instead of just conducting medical observation and waiting for the disease to recur.”

“What is exciting is that, based on the results of the QUAZAR study, we believe that by taking relatively well-tolerated CC-486 tablets, it can help reduce the risk of recurrence and improve survival.”

The trial involved 472 patients with an average age of 68 years. Some of them received CC-486 treatment and the other received a placebo.

After Professor Wei announced the results at the American Society of Hematology meeting in December last year, the US Food and Drug Administration quickly approved the use of CC-486 in the United States in September this year. Professor Wei added that the drug has not yet been approved for use in Australia.

Professor Wei said that the data provided in the study may establish a new standard of care for elderly AML patients, “because our findings show that CC-486 significantly delays the recurrence of the disease, prolongs the survival period, and does not affect the quality of life.”

He said: “This is a very important advance because the drug is easy to administer, and adult patients with AML do not have to spend extra time in the hospital.”