LITT: How to “eliminate” gliomas without craniotomy?

Glioblastoma (GBM) is the most common and fatal primary brain tumor. Surgery is usually the first choice of initial treatment, and there is also evidence that the degree of resection rate is associated with better overall survival (OS).

However, the recurrence, multifocality, and repeated operations of this disease mean that clinicians often face problems such as the deep brain or the complicated and inaccessible location of the disease, and the patient’s reluctance to operate again, and many patients may be diagnosed with Because of the age, the inevitable functional impairment after the comorbidities and other factors were told not to accept craniotomy

In this regard, Professor James Rutka, an expert member of the World Neurosurgery Advisory Group (WANG) under INC and the former chairman of the World College of Neurosurgery, will provide patients with a cutting-edge minimally invasive option according to their own conditions-laser room in order to help patients strive for a better prognosis. Quality hyperthermia (LITT).

Laser Interstitial Hyperthermia (LITT) was first proposed in 1983. It is a minimally invasive technique for the treatment of difficult-to-resectable intracranial lesions, such as tumors, radiation necrosis, functional areas in the brain or epileptic foci of deep nuclei and white matter, etc. . It has also become a viable option for patients who are not suitable for surgery because of comorbidities or risks of anesthesia. 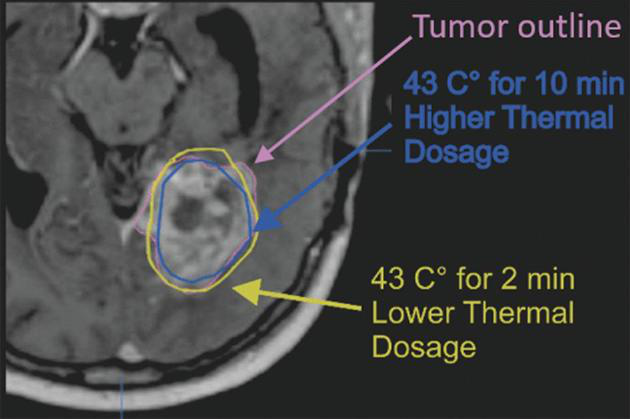 The long-term efficacy of LITT is currently being studied in a variety of applications, including the treatment of primary and secondary tumors. In recent years, LITT has become a suitable choice for several difficult cases. The development of magnetic resonance thermal imaging technology, enhanced laser control and real-time visualization of pathological and normal tissue temperature changes have increased the applicability of LITT and made it less complicated.

In a retrospective analysis, patients who received MRI-guided LITT (MRgLITT) treatment for glioma, recurrence, metastasis, radiation necrosis, and epilepsy from 2010 to 2014 had an average hospital stay of 1.8-3.6 days. The average length of hospital stay usually depends on the severity of postoperative complications and edema, and many patients can be discharged the next day.

It is worth mentioning that laser interstitial heat therapy shows great potential in glioblastoma, because glioblastoma shows a higher level of heat absorption than low-grade glioma. Several early studies have shown that the survival rate of GBM patients after LITT treatment does increase, ranging from 6.9 months to 30 months, and the survival rate is positively correlated with the degree of ablation. In a study of 24 GBM patients, the median progression-free survival after LITT treatment was 5.1 months.

Mohammadi and Schroeder reported that 10 patients with recurrent GBM were treated with the highest thermal dose to obtain better survival rates. Sloan et al. described 10 patients with recurrent GBM after LITT for ablation, the median survival time was 316 days, the median progression-free survival exceeded 30%, and only 2 patients had long-term neurological complications after LITT . Jethwa et al. also reported 20 cases of brain tumors, of which 6 were GBM, and only 1 of them had edema due to the simultaneous use of 3 laser probes.

LITT uses magnetic resonance (MR) thermometry to transfer heat to the surrounding brain tissue through a stereotactic laser probe in a controlled manner. With proper operation, this reusable minimally invasive technology can indeed be colloidal Patients with blastoma strive for a longer survival period, and many patients with recurrent glioblastoma have benefited from it.

Figure 1: A 68-year-old man with glioblastoma recurrence after surgery, before (A) and after (B) ablation with LITT. Please note that the ablation zone is limited to the surrounding brain cistern, protecting the adjacent brain stem from damage.

Figure 2: A 45-year-old man with anaplastic oligodendroglioma recurrence after surgery, before LITT laser ablation (A) and after ablation (B). The ablation zone is along the central anterior sulcus, avoiding damage to the primary motor cortex.

Figure 3: A 51-year-old man with a recurrence of right temporal thalamic glioblastoma after surgery. LITT before (A) and after ablation (B) showed that the lesion was damaged.

In addition, the LITT technology has a strong “fit” ability. After the tumor is ablated, it can be decided whether to add a minor operation or adjust the comprehensive radiotherapy and chemotherapy plan according to the patient’s treatment. A prospective study used laser interstitial hyperthermia for 34 patients with glioblastoma multiforme, and developed a resection plan for 5 patients, that is, LITT+microscopic surgical resection. Table 1 summarizes the preoperative and postoperative treatment, patient demographic characteristics and tumor characteristics of these cases. The preoperative tumor volume and edema ranged from 36.3 to 147.7 cm³.

Tumor size and whether it is accompanied by edema are important factors that affect the outcome of surgery-an important parameter of tumor resection. The high signal change on the FLAIR sequence indicates that the tumor site may be excluded from open surgery due to the incidence of surgery, or due to edema around the tumor Negative Effects.

When the tumor volume is ≥10cm³ and the surrounding edema is obvious, when the tumor is located in the deep white matter, basal ganglia and/or thalamus, mass pressure and edema may cause hydrocephalus (such as near Sylvius aqueduct), consider laser interstitial Heat therapy and minimally invasive resection, rather than blindly pursuing resection rate and sacrificing the quality of life of patients Surgical resection is performed after the LITT treatment under the guidance of general anesthesia and MRI is completed, and then a small craniotomy is performed, hoping that the entire operation will benefit the patient more.

The results of the study showed that compared with conventional craniotomy or LITT alone, small incision resection of ablated tissue after LITT did not significantly prolong hospital stay. Compared with the unresected case, the total operation time of these five patients needs to be increased, but they do not need to be in the ICU for monitoring and treatment. They were not admitted to the hospital for 30 days after the operation.

Of course, tumor resection methods are different, and all patients did not have any new defects due to LITT or postoperative resection. However, there were two adverse events: postoperative seizures, which need to be controlled with epilepsy drugs; lateral ventricle compression and cerebral edema, which require 3 days of hypertonic saline. Encouragingly, these 34 patients who received LITT treatment due to tumors did not have postoperative infections or any other infections, and LITT fought for a longer survival period for them.

How to effectively avoid the risk of surgery?

1. LITT may cause edema around the lesion. From an imaging point of view, the blood-brain barrier is destroyed after LITT, and then new blood vessels are gradually repaired; other findings include peripheral enhancement and limited spread outside the initial boundary of the treated tumor. However, the opening of the blood-brain barrier has the potential to enhance the follow-up chemotherapy of brain tumors. In addition to opening the blood-brain barrier, damaged cells can also release signals that trigger the production of pro-inflammatory mediators in surrounding tissues as a means of tissue repair. Therefore, although LITT reduces surviving tumor cells, it inevitably produces edema in the surrounding area, which will reach a peak in 3-4 days after LITT.

2. LITT may not be suitable for large lesions, because the tissue volume increases and edema effect occurs after LITT. Jethwa et al. routinely use steroid reduction to treat edema for 2-4 weeks. The standard treatment for this edema is steroid therapy, and occasionally hypertonic dehydration therapy is used. For patients treated with larger lesions, it may be necessary to extend the course of steroid treatment and hypertonic dehydration treatment, which prolongs the hospital stay and may even lead to rehospitalization. However, symptomatic edema after LITT can be very severe and requires decompression surgery to control it.

3. The lesion and surrounding edema after laser thermal ablation may require additional medication or surgical treatment to avoid deterioration of nerve function. At present, there is also a method of planned removal of ablated tissue to reduce the development of edema, but this requires the attending physician to have a wealth of ablation experience in order to obtain the two potential benefits of LITT technology for patients: 1) Resection decompresses the ablation zone , Leave room for brain edema and tissue expansion; 2) reduce the apoptotic and necrotic tissue occupation, thereby reducing the impact of cytotoxic edema and inflammation.

Although laser interstitial hyperthermia (LITT) has shown great potential in the treatment of glioblastoma, there are still many problems that need to be solved, especially postoperative complications caused by improper operation and a large range of cerebral edema Therefore, for patients with higher requirements for postoperative quality of life, they often choose to first consult with international experts who are good at using this technology to obtain cutting-edge treatment plans or perform surgery by them to ensure treatment and prognosis.

Regarding the application of LITT technology, Professor James T. Rutka, an expert in pediatrics and the world pioneer of LITT technology, also summarized the three key elements of this technology: stereotactic method, which accurately locates the laser probe within the treatment target; Thermal tissue ablation of the system over time; MRI thermal imaging camera can monitor temperature changes and tissue destruction in real time.

MRI-guided LITT technology has been widely used in its clinical practice, and is continuously being accepted by more patients. International foreign experts are still exploring and I believe that LITT technology will benefit more brain tumor patients in the future.