Can meningioma not have a craniotomy?

Can meningioma not have a craniotomy? Is meningioma surgery a major operation?

Meningiomas are slow-growing benign lesions, accounting for 25% of primary intracranial tumors. Most meningiomas are located in the falx, convex surface, sella tuberosity, sphenoid crest, or olfactory groove. The ventricles and posterior fossa may also be affected.

Extracranial extension of primary intracranial meningioma occurs in up to 20% of cases, mainly involving the orbit, middle ear, and soft tissue. Extending to the nasal cavity and paranasal sinuses is rare, and primary meningioma in these areas is even less common. Here, we present an extremely rare case of sphenoid sinus meningioma, which was excised via the nasal sphenoid approach.

A 61-year-old woman presented to the Department of Neurosurgery at the Second Affiliated Hospital of Hangzhou Medical College, China, on April 28, 2014. She complained of vertigo and blurred vision in her left eye in the previous 12 days. She also described headaches with nausea and vomiting, but no history of fever, seizures, hearing loss, dysuria, or paralysis. Her medical history is nothing special except for a one-year history of hypertension.

The vital signs are stable. Neurological examination revealed ptosis, oculomotor nerve apraxia, and no light reflex in the left eye pupil, which was attributed to left oculomotor nerve palsy. Magnetic resonance imaging revealed a 43 × 31 × 33 mm mass in the sphenoid sinus, which invaded the posterior ethmoid sinus forward and the bottom of the anterior fossa upward. The mass showed slight low-intensity on t1wi (1-weighted imaging on 1WI), slight high-intensity on T on 2WI and diffusion enhancement and contrast (Figure 1). Laboratory analysis found that pituitary hormone levels and tumor markers were within the normal range. 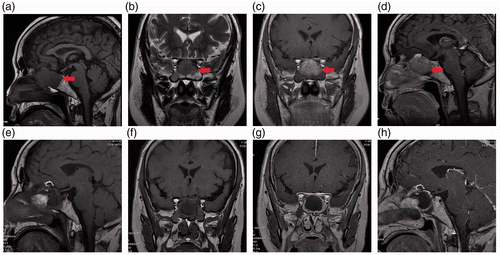 The transsphenoidal sinus surgery under the microscope was performed 2 days after the MRI. A gray, hard, blood-supplied mass was found in the sphenoid sinus (Figure 2). The anterior, inferior and upper walls of the sphenoid sinus can be damaged. A biopsy was done, and it was suspected to be a meningioma. The tumor was removed using pericystic dissection technique and intracavitary decompression. Cerebrospinal fluid leakage occurred when the tumor base was removed from the dura mater of the anterior cranial fossa. Multi-layer reconstruction uses dural graft implants, fat grafts and fascia lata. The lumbar drainage tube was removed on the 7th day after surgery.

Meningioma is the third most common type of intracranial tumor and is known to originate from arachnoid cells. 7 Although extracranial meningioma is rare, it has been reported that it is clinically divided into primary and secondary subtypes from extracranial and intracranial according to the origin. Meningiomas that originate in the paranasal sinuses are very rare and are thought to be caused by ectopic arachnoid nests left behind after embryogenesis.

We present a rare case in which sphenoid meningiomas invaded the ethmoid sinus forward and the bottom of the anterior fossa upward. Searching PubMed (using keywords “meningioma” and “sphenoid sinus”) found 4 cases of meningioma involving sphenoid sinus. Another report of 30 cases of extracranial sinus meningiomas included only two cases that originated from the sphenoid sinus.

Meningiomas usually appear as iso-density or high-density masses on computed tomography (CT) images. The MRI of a parathyroid adenoma usually shows an equal intensity mass with a strong contrast between 1WI and T2 and a WI showing the dural tail sign. Sphenoid meningioma may lack these obvious imaging features, which complicates the preoperative diagnosis. The differential diagnosis includes mucinous cysts, aneurysmal bone cysts, giant cell lesions, meningioma, fibrodysplasia, chordoma, craniopharyngiomas, rhabdomyosarcoma, nasal cavity and sinus cancer, and neuroblastoma. A closer look at T 1-In our case, contrast magnetic resonance imaging showed high signal enhancement at the base of the anterior skull, possibly due to abnormal thickening of the dura mater. This may be regarded as an atypical dural tail sign, which may help preoperative diagnosis.

Surgical resection is the preferred treatment for meningiomas because of the tumor’s radioresistance and the potential damage to surrounding tissues caused by radiation. The transsphenoidal approach is direct, safe and minimally invasive. In addition, it is easy to obtain tissue samples for frozen biopsy, allowing rapid tumor classification and enabling surgeons to determine the best resection technique. It is important to dissect along the tumor capsule and correctly handle the blood supply arteries and draining veins in order to minimize bleeding and keep the surgical area unobstructed. The tumor capsule and its connection with the anterior skull base should be removed to achieve Simpson class I resection and avoid recurrence. The requirements for skull base reconstruction should be considered before surgery, because once the anterior skull base attachment is removed, cerebrospinal fluid leakage is inevitable. It is recommended to perform multi-layer reconstruction according to the size of the lesion, the location of the intradural or epidural, and the occurrence of intraoperative leakage. According to our experience, multi-layer sealing with dura mater, fat graft, fascia lata and possibly septal valve is sufficient and effective. In this case, complete resection was achieved and the patient recovered smoothly.

In summary, we report a case of sphenoid sinus meningioma that was microscopically resected through the nasal sphenoid approach. The operation was completely removed and the recovery was smooth. Although meningioma in this area is very rare, it should be considered part of the differential diagnosis of a sphenoid sinus mass. Surgery is the preferred method of treatment, and a minimally invasive transnasal approach is recommended. Skull base reconstruction is very important to avoid postoperative cerebrospinal fluid leakage.