The rise and rapid development of nanotechnology has brought a new dawn for humans to cure cancer, and it has become one of the most popular research directions in the field of tumor treatment today. Of course, the existing nano-therapeutic methods for tumors still have certain shortcomings, and many scientific researchers are constantly developing new and more efficient therapies.

Tumor heterogeneity is a major obstacle to cancer treatment. Tumor tissue contains a variety of different cells, which have different phenotypic characteristics and different sensitivities to treatment. It is worth noting that cancer stem cells (CSCs) are considered to be one of the determinants of tumor heterogeneity.

Cancer stem cells have the characteristics of self-renewal, high tumorigenicity, invasiveness and resistance to traditional chemotherapy and radiotherapy. Many studies have shown that the existence of cancer stem cells (CSCs) is the culprit in the progression, recurrence and metastasis of multiple malignant tumors . From this point of view, in order to completely cure tumors, the first thing to do is to solve the problem of tumor stem cells.

In this study, the research team of China Pharmaceutical University proposed a combination therapy strategy that uses nanomedicine controlled by cell differentiation to overcome the obstacles of tumor stem cell (CSCs)-derived tumor heterogeneity treatment: all-trans retinoic acid ( ATRA) and the chemotherapy drug camptothecin (CPT) are co-loaded on a nanocarrier. Previous studies have confirmed that these two drugs have a synergistic effect on tumor killing. 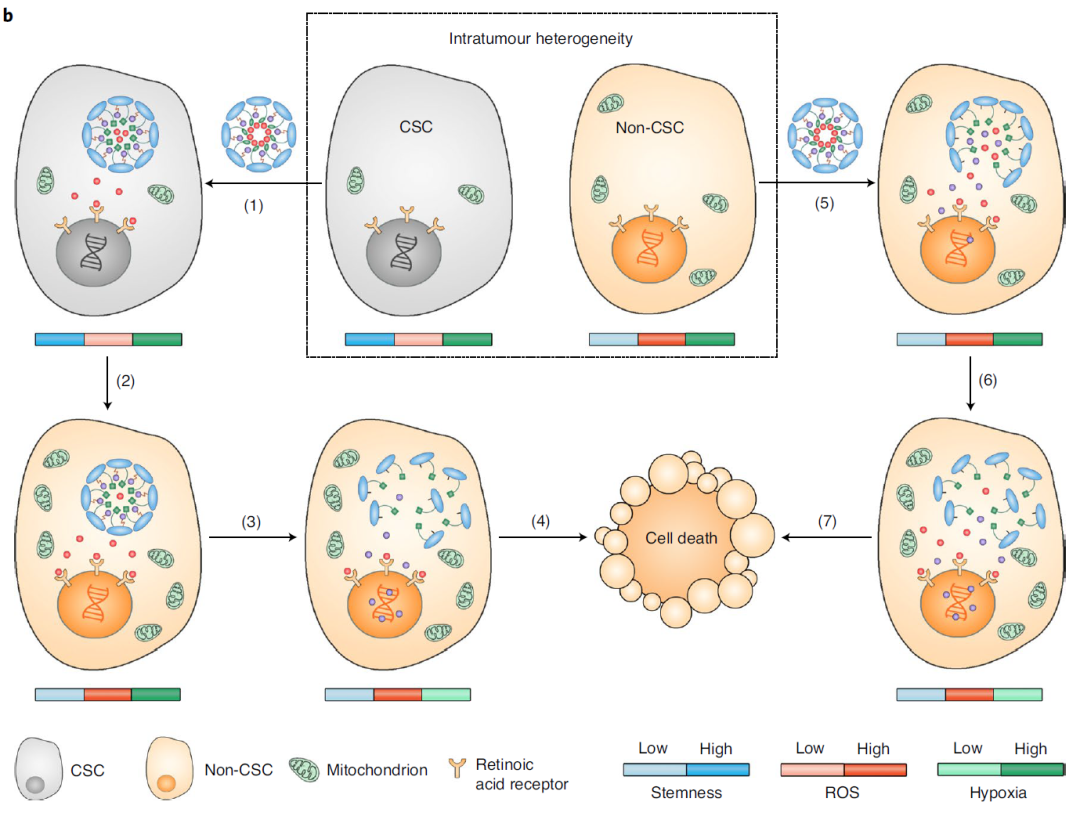 Simply put, ATRA/CPT-NPs can adaptively adjust the drug release ratio for different cell phenotypes (including CSCs and non-CSCs). In addition, ATRA and CPT in nanoparticles have a synergistic effect-ATRA can enhance the sensitivity of cancer stem cells (CSCs) to CPT and prevent the upregulation of cell stemness induced by CPT stress, thereby maximizing the elimination of tumors in tumor tissues Stem cells (CSCs).

The synergistic effect of ATRA and CPT on reducing the dryness of CSCs, alleviating tumor hypoxia, and inhibiting tumor cell proliferation

In this regard, the author wrote in the paper: “Our research findings provide a promising perspective for exploring fusion nano-therapeutics to overcome cancer stem cell (CSCs)-related chemotherapy resistance!”

In mouse models, ATRA/CPT-NPs inhibit the growth, recurrence and metastasis of primary tumors

All in all, this study designed an ingenious and efficient nanoparticle—ATRA/CPT-NPs, which can adjust the release ratio of the two drugs according to the differentiation state of cancer stem cells (CSCs) in tumor tissues, and kill tumors. At the same time, it can also avoid tumor heterogeneity and drug resistance caused by cancer stem cells (CSCs), which reveals a new direction for tumor treatment!