Competition of different COVID-19 vaccines.  Coronavirus spike (spike) protein is a class I virus fusion protein that can mediate the binding of the virus to the host receptor.

The length of N-glycosylated S protein varies greatly between different coronaviruses, about 1100aa-1600aa, and the molecular weight can reach up to 220kDa. The trimeric Spike protein forms 18-23nm long rod-shaped spikes, which are distributed on the surface of the coronavirus membrane. Spike protein is an important site of host neutralizing antibodies and a key target for vaccine design.

Spike protein contains two subunits with different functions: the S1 subunit is usually spherical and contains a receptor binding domain that can bind to the host receptor; the S2 subunit promotes the process of membrane fusion between the virus and the host cell.

The S1 subunit of the Spike protein of the β coronavirus contains multiple domains A-D, of which domains A and B constitute the receptor domain RBD. The S2 subunit is highly conserved and contains key protein fragments that promote the fusion of virus and cells, including fusion peptides, two heptapeptide repeat regions (HR1 and HR2) and transmembrane domains. The transmembrane domain of S2 is also very conserved among coronaviruses of different genera. 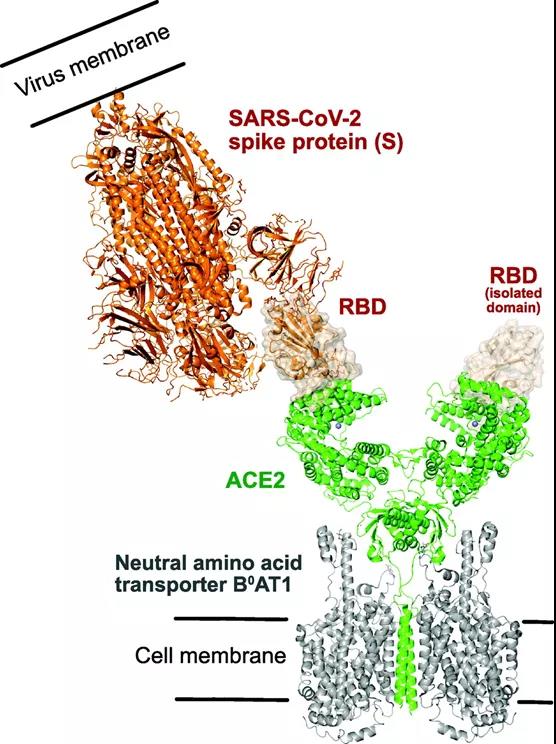 The figure above illustrates: SARS-CoV-2 spike protein (S) binds to the ACE2/neutral amino acid transporter B0AT1 complex. The model is generated by superimposing the receptor binding domain (RBD) of S (shown by surface rendering) on ​​an isolated S RBD, the binding position of the S RBD on the ACE2 receptor (shown in green) has been passed through a cryo-electron microscope Perform experiments to determine. Please note that ACE2 is a known accompaniment of the amino acid transporter B0AT1, used to help stabilize and facilitate the determination of the low-temperature EM structure of ACE2. There are 2 monomer copies of ACE2 in the receptor complex, and each copy binds to an isolated S RBD, as shown in the figure.

Researchers from the Department of Microbiology of the University of Manitoba in Canada have summarized the main vaccines currently under development through research on SARS-CoV-2 and vaccine research against the new coronavirus.

The researchers first mentioned the pitfalls in vaccine design, which deserve our attention. These are the 6 different mutations in the S protein from patient-derived isolates. However, these mutations did not seem to affect the pathogenicity of the virus. Single nucleotide polymorphisms are commonly used to measure evolutionary processes, especially in viral genomes that use wrong RNA and rely on RNA polymerase for replication. In another study using single nucleotide polymorphism gene modeling, mutations in basic proteins including S, RNA original enzyme, nucleoprotein, and RNA polymerase were discovered. When developing a SARS-CoV-2 vaccine, it is important to consider the possibility of mutations that may appear in the future, which may circumvent the efficacy of the vaccine. In fact, it has recently been demonstrated that the RBD mutation of the SARS-CoV-2 S protein is easy to select in the laboratory, allowing the virus to avoid monoclonal antibodies or convalescent plasma. 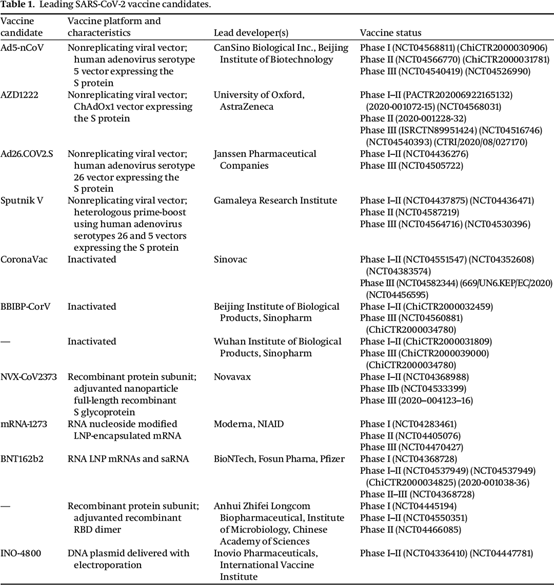 Adenoviruses are generally safe, and vaccines can be quickly deployed in industrial settings easily. Adenovirus contains a double-stranded DNA genome of ∼34-43 kb, and contains 4 early regions (E1, E2, E3, and E4). In the case of using adenovirus vectors to develop SARS-CoV-2 vaccines, the main transgenes currently used are S protein or fragments thereof, especially RBD, although some use viruses to express multiple SARS-CoV-2 genes. There are generally two strategies for recombinant virus production: one uses recombination in bacterial cells, and the other uses Cre-recombination medium in 293Cre cells. 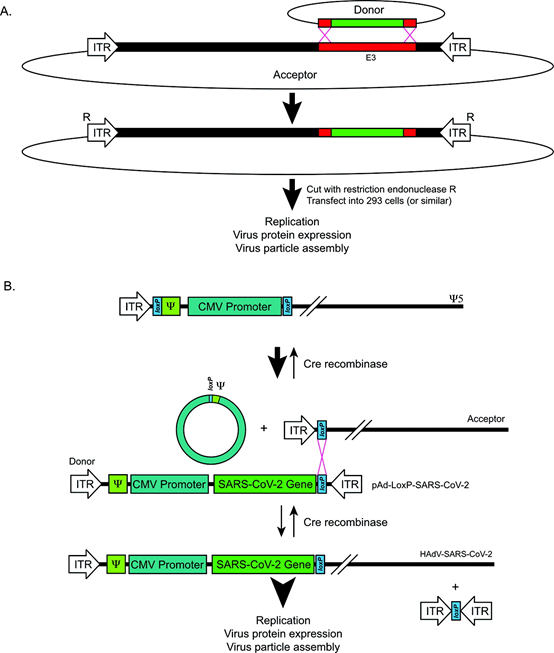 At the end of January this year, Ad5-nCoV, a vaccine candidate of Cansino Biotech, released a phase III clinical trial of a recombinant emerging coronavirus vaccine (Adenovirus Type 5 vector) (“Ad5-nCoV”), announcing that the company has completed Ad5-nCoV’s Phase III clinical trial interim analysis of cases has accumulated, and the relevant data has been submitted to the independent data monitoring committee for analysis and recommendations. The Phase III clinical trial of Ad5-nCoV is a global multi-center, randomized, double-blind, placebo-controlled, adaptive trial designed to evaluate the effectiveness and safety of the Ad5-nCoV vaccine in healthy adults 18 years and older And immunogenicity. All subjects received a dose of Ad5-nCoV or placebo on day 0, and followed up the effectiveness and SAE of the candidate vaccine during a 52-week period.

AstraZeneca vaccine AZD1222 issued a press release on November 23, 2020, announcing that their interim analysis of the third phase trial showed that AZD1222 is effective in preventing COVID-19 from 62% to 90%, depending on the used Dosage regimen (AstraZeneca 2020b). After analysis together, the average curative effect of the ration plan was 70%. The vaccine is well tolerated and no serious safety incidents have been confirmed. The additional data of the third phase will be evaluated soon.

Johnson & Johnson (J&J) announced the results of the third phase of the COVID-19 vaccine Ad26.COV.2.S at the end of January: the comprehensive effective rate reached 66%. The Phase III experiment recruited a total of 44,000 volunteers worldwide. Effective protection was observed at the earliest 14 days after vaccination, and the overall effective rate reached 66% 28 days after vaccination. Among them, the effective rate is 72% in the United States, 66% in Latin America, and 57% in South Africa, where the new variant virus is active. Johnson & Johnson emphasizes that among all adults who have been vaccinated for 28 days, the protection rate for severe illness reaches 85%. In addition, the vaccine protection efficiency is similar to the effects of different races and ages, including those over 60 years old.

The Russian satellite V vaccine adopts a two-way vaccination method, using recombinant HAdV-D26 and HAdV-C5 to carry the SARS-CoV-2 S protein transgene. The third phase of clinical trials has begun, involving 40,000 adult participants (NCT04530396). It will be double-blind, placebo-controlled and randomized, with the purpose of evaluating the immunogenicity, safety and protective effect of the vaccine. Although Sputnik V is the first registered SARS-CoV-2 vaccine, it still faces similar obstacles to other non-restorative viral vector vaccines currently under development.

The Chinese Center for Disease Control and Prevention Gao Fu and others have just released domestically-made inactivated Covid-19 vaccine (Beijing Institute of Biological Products BBIBP-CorV inactivated Covid-19 vaccine) and the domestically-made recombinant protein subunit Covid-19 vaccine (Zhifei Biotech Co., Ltd. The protective effect of the ZF2001 recombinant protein subunit COVID-19 vaccine jointly developed by the Chinese Academy of Sciences on the new South African variant (SARS-CoV-2 variant of concern (VOC)501Y.V2). The results showed that although the neutralizing effect of the sera of these two vaccines against the new South African variant slightly decreased, it still retained most of the neutralizing activity, suggesting that the two vaccines still have a protective effect on the new South African variant.

The Phase III clinical test results of the new coronavirus inactivated vaccine developed by Sinopharm Group at the end of last year showed that the vaccine is safe after vaccination, and high titer antibodies can be produced in the vaccinated after two doses. At the same time, the protection of the vaccine against the new coronavirus is 79.34%, which has reached the relevant technical standards of the WHO and the relevant standards of the State Food and Drug Administration. After two doses of the vaccine, the vaccinated person can produce high-titer antibodies, and the neutralizing antibody positive conversion rate is 99.52%.

The ZF2001 vaccine jointly developed by the Institute of Microbiology of the Chinese Academy of Sciences and Zhifei Biology has launched three phase trials in Pakistan and Uzbekistan.

Novavax chose the S-2P protein. What does it mean? It is Novavax that is not the real new coronavirus S protein, but a modified new coronavirus S protein. His role is to replace some key amino acids, making this protein lose its ability to deform. For example, if a folding bicycle replaces the folding bearing in the middle with non-foldable parts, the folding bicycle loses its deformation function.

Therefore, the human body can produce stable pre-fusion antibodies after receiving this antigen stimulation. Vaccine companies that choose RBD conjugates thought of another idea. Let’s take a folding bicycle as an example. Even if the bicycle is folded, there will always be parts that have not changed. Among these unchanged parts, one of the most important functions is called up to make antigens, such as pedals, which can also produce antibodies. effect.

Moderna published the final data of the vaccine trial on November 30 last year, announcing that its Moderna vaccine based on mRNA technology is close to 94.1% effective in preventing COVID-19 infections, and the effective rate in severe cases is 100%! Moderna’s final data analysis comes from more than 30,000 participants in the third phase of the trial, of which 196 cases of COVID-19 have appeared, including 30 patients with severe COVID-19. Among the 196 COVID-19 patients, 185 were vaccinated with a placebo, and only 11 were vaccinated, which means that the effective rate of the vaccine has reached 94.1%!

It was also at the end of November last year that the final data analysis of the Phase III clinical trial of the COVID-19 vaccine developed by Pfizer and BioNTech showed that even in elderly subjects, the vaccine’s effectiveness in preventing COVID-19 infection reached 95. %, and did not cause serious safety hazards.

Also in terms of technological advancement, recombinant protein vaccines are more advanced than inactivated vaccines. Like mRNA vaccines, recombinant protein vaccines are vaccines that can be developed as long as they have viral sequences and do not require virus strains. At the same time, they are only cultivated. For some proteins, the vaccine itself is not toxic, so the production environment is not as harsh as inactivated vaccines.

In just a few weeks, SARS-CoV-2 went from a small outbreak to a global pandemic. The global scientific community has carried out a lot of research and development work in the fields of pathology, biochemistry, genetics, therapeutics, vaccinology, and drug discovery.

As the article describes, because of these efforts, candidate vaccines have emerged in a short period of time. Before SARS-CoV-2, it usually takes 10 years for preclinical candidate vaccines to be marketed successfully, but based on the huge demand for SARS-CoV-2 vaccines, this timetable may be greatly shortened. However, the safety of vaccines cannot be ignored. Therefore, understanding the biological characteristics of cutting-edge vaccine candidates should not be rushed.

Fortunately, animal models such as genetically modified hACE2 mice have been rapidly developed and evaluated to verify the effectiveness of vaccines in preclinical studies. According to the estimates of the Alliance for Epidemic Prevention Innovation (CEPI), it will take about 12-18 months in the next 12-18 months. US$2 million in investment to fund clinical trials (CEPI 2020).

Given the promising data so far, it is very likely that multiple SARS-CoV-2 vaccines will be approved for distribution. When this happens, the world must work together to ensure that every country has this opportunity.

A dialogue between vaccine developers, regulators, and the government has begun, which is necessary to ensure that all affected areas have access to sufficient quantities of vaccine. However, the manufacturing process may limit the initial capacity, depending on the type of vaccine that will eventually circulate.

Although some infrastructure can be used for existing vaccine platforms, such as inactivated virus vaccine production, new RNA vaccines will require new large-scale production facilities. Despite this, Pfizer claims that they can produce 50 million doses of RNA-based vaccines in 2020 and up to 1.3 billion doses in 2021.

In view of the epidemiology of SARS-CoV-2, this virus may be circulating in the population for a long time. Therefore, efforts to develop effective vaccines are essential, and influenza vaccination may even be required every year, depending on SARS-CoV- 2 How to evolve over time. This requires continued funding for basic research and development, pre-clinical and clinical trials, because the knowledge gained from these efforts will enable humans to respond to current viral epidemics and prepare us for future diseases .