Who has used more than 1.1 billion doses of COVID-19 vaccines?

Considering that it has only been 16 months for humans to identify the new coronavirus, and only 4 months for the start of vaccination; it is indeed a remarkable achievement.

Who uses the COVID-19 vaccine?

As shown in the figure below, the proportion of vaccination per 100 people shows that there is obvious unevenness in the distribution of vaccines. 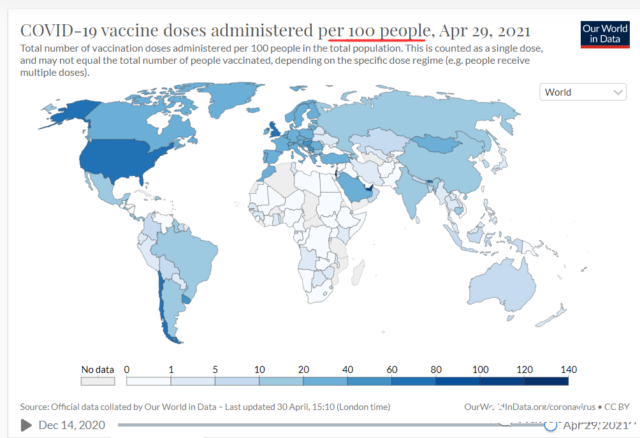 Let’s take a closer look at the specific data. 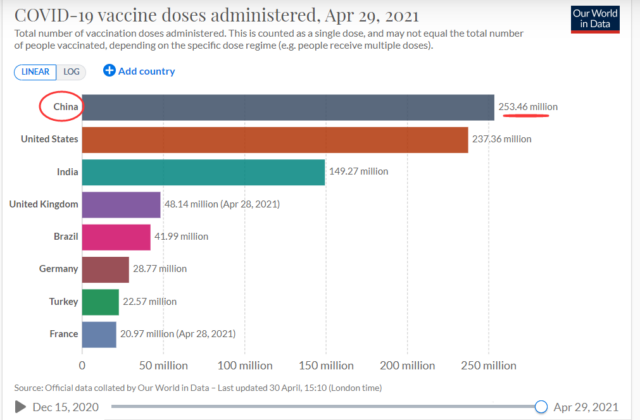 Regarding the specific population in the country where the vaccine was administered, Where is the vaccine going?

China is the only country among the major countries in the world that has effectively controlled the epidemic, so the purpose and strategy of vaccination are different from those of other countries.

From the perspective of vaccination purposes, the short-term is to avoid the spread of imported cases in the Mainland; the mid-term is for the Winter Olympics in February 2022; the long-term is to obtain herd immunity before the complete reopening.

For this reason, the key populations for vaccination in China are frontline personnel, college students and people living on the border.

Because of the COVID-19 pandemic, as far as the United States is concerned, the first batch of vaccinated medical staff is followed by the most vulnerable group to the virus: the elderly in nursing homes. In the back are people with intensive social contact, such as teachers, police, homeless people in shelters, prisoners, etc., and they are also vaccinated from old to middle-aged according to age groups. Middle-aged people have basic diseases or social People with multiple activities (such as shop staff, occupations and workers who must go out to work) are given priority; by April 19, vaccinations for adults over 16 years old are completely open. Vaccinations for children aged 12-15 and younger children will also be opened based on the results of clinical trials in the future. 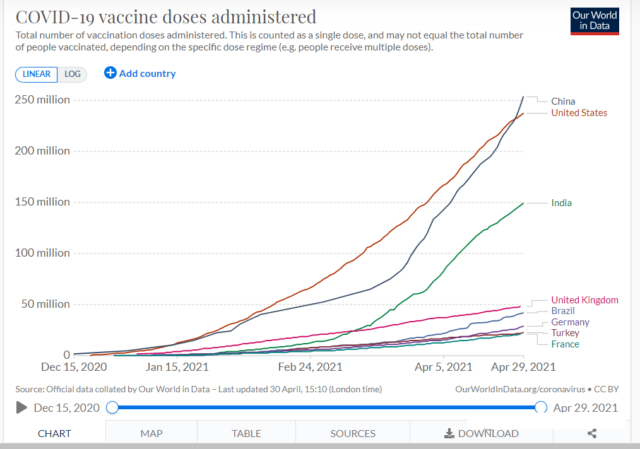 Actually per capita vaccination rate in China is still too low.

In the past two weeks, the circle of friends has been reporting about India’s tragic situation. It prompts that “except for vaccines to achieve herd immunity, everything else is unreliable.” Therefore, China must use the time when the hard-won epidemic is well controlled to complete herd immunity.

Because China will open its doors in February 2022 and welcome athletes and tourists from all over the world to China for the Winter Olympics. 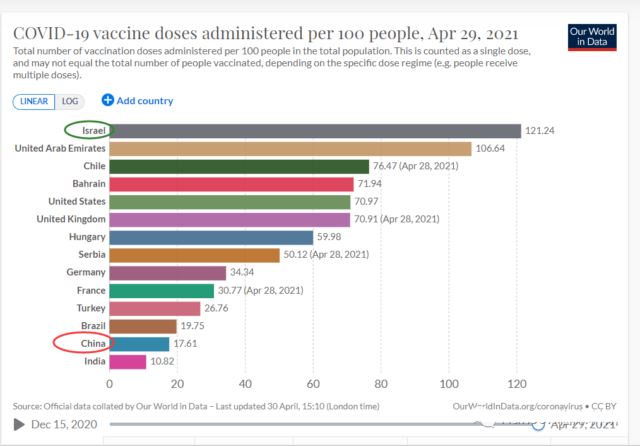 We have never felt that this issue is a problem. However, through many background messages, we found that this problem is really a problem.

Facts speak louder than words.  The biggest beneficiary of vaccination is undoubtedly Israel. Israel has the highest vaccination rate. It is vaccinated with the mRNA vaccine of Pfizer/Germany BioBTech. The COVID-19 epidemic has been basically controlled.

We predicted last week that the number of infections in the United States will drop significantly this week. Sure enough, it dropped by 20%. It is not that we can tell fortune-telling, but because we have seen that before Israel reached the 40% first-dose vaccination rate, there was also a period of time when the number of infections did not drop but rose slightly, similar to the past two months in the United States. But after reaching the first dose of 40%, the vaccine began to exert significant effects.

In addition to the examples of Israel and the United States, we also need some inspiration from the UAE. The number of vaccinations per 100 people in the UAE is 106, second only to Israel. The UAE is also the first country in the Middle East to produce vaccines and cooperates with Sinopharm Group to produce inactivated virus vaccines. Vaccines in the UAE are mainly inactivated virus vaccines from Sinopharm Group, as well as mRNA vaccines from Pfizer in the United States, adenovirus vector vaccines from Russia’s Satellite V, and adenovirus vector vaccines from AstraZeneca in the United Kingdom. However, the outbreak in the UAE has not decreased significantly as in Israel.

It shows that in addition to vaccines, non-pharmacological interventions such as social control, masks, and social distancing still play an important role. There is no data showing the difference between different vaccines for epidemic control. 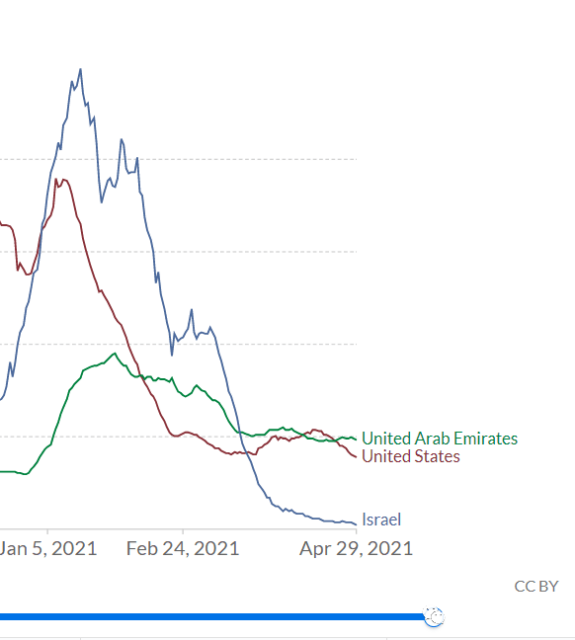 Human beings have made unprecedented achievements, starting to develop and verify a vaccine one year after the virus was identified, and inoculated more than 1 billion doses in 4 months.

The vaccination rate is the most important indicator of epidemic control, but non-drug methods and other factors cannot be ignored.