COVID-19: Nature reviewed 200 blockbuster COVID-19 papers What happened to the COVID-19 epidemic situation in the past year?

Recently, the world’s top scientific journal Nature published an online article reviewing important papers that have been published since the global epidemic of new coronavirus pneumonia more than a year ago. From March last year to April this year, more than 200 authoritative papers in 13 months, with title keywords ranging from “spreading”, “antibody”, “asymptomatic infection” to “mutation” and “vaccine”, reflecting the recognition of humans on new coronavirus pneumonia. The knowledge process also shows the trend of the world epidemic to a certain extent. 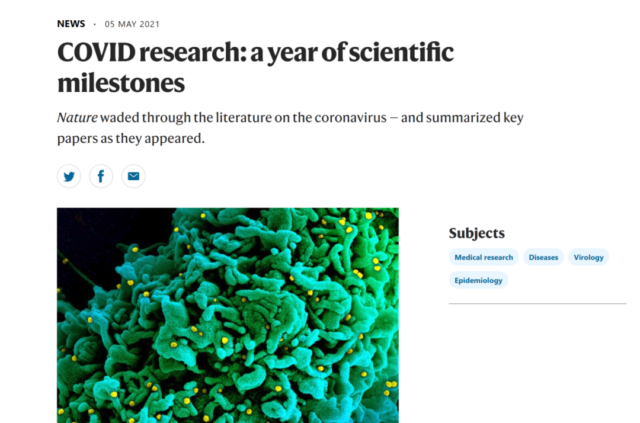 According to incomplete statistics from the “medical community”, among the important COVID-19 papers listed by Nature, 106 authors are from the United States, 35 are from the United Kingdom, 19 are from China, and the others are from Germany, the Netherlands, Israel, South Africa and other countries. They are published in world authoritative journals such as Nature, Cell, Science, Lancet, and some unapproved papers were first published on academic platforms such as bioRxiv, medRxiv, etc., so that they can be quickly published for reference by scholars all over the world.

China was one of the first two countries to publish important papers on the COVID-19 in March last year, and the other was the United States. In March 2020, Yang Xiaoming, director of China’s National Joint Vaccine Engineering Technology Research Center, and Liu Lei, director of Shenzhen Third People’s Hospital, respectively led the team. Each independently proved that severely ill patients with COVID-19 received blood injections from patients with COVID-19 and their conditions improved significantly.

The remaining 17 papers by Chinese scholars included in the important papers of COVID-19 by Nature are from the Hong Kong University Shenzhen Hospital, Guangzhou Medical University, Fudan University, Peking Union Medical College, Wuhan University and other research institutions, involving the stage of disease and virus concentration, immune antibodies, Themes such as antiviral drugs, places and laws of virus transmission.

As early as April last year, Qin Chuan, director of the Institute of Laboratory Animals of Peking Union Medical College, published a paper on bioRxiv, demonstrating the effectiveness of the inactivated vaccine in monkeys. The vaccine entered the human safety test phase that month.

The study on the theme “How Hong Kong can stop the spread of the virus without strict restrictions” was regarded by Nature as one of the important papers on COVID-19 in April last year. In early March last year, the Peng Wu team of the University of Hong Kong conducted an investigation locally and found that the effective measures included extensive testing, isolation of close contacts, and closure of schools. The research results were published in Lancet Public Health in April last year. However, three months after the publication of the paper, the Hong Kong epidemic broke out again, and community infections occurred, with more than 100 new confirmed cases every day.

The research published in May of the same year with the theme “What is preventing the epidemic in China?” was also included in the important papers of Nature’s COVID-19. It combined the research of Professor Yu Hongjie’s team from the School of Public Health of Fudan University and the University of Southampton in the United Kingdom. Introduction. The two studies show that there is no simple answer: school closures cannot prevent the spread of the epidemic, but at the peak of the epidemic, it can indeed reduce the number of new infections every day; rapid detection of infections and isolation of infected persons is to control the Chinese COVID-19 The most effective measure for pneumonia cases, but if travel and social contacts are not restricted, the number of cases will also increase sharply.

Research by the University of Southampton team also showed that if the epidemic control action is postponed for three weeks, the number of people infected in China may be 18 times higher.

The “medical community” sorted out and found that among the titles of more than 200 important COVID-19 papers, 50 were related to “immunity” or “antibody”, 34 related to “vaccine”, and 25 related to “mutation”, “variant” or “mutation”. , 17 articles mentioned “communication”, and more than ten studies mentioned topics such as “children”, “elderly” and “youth”.

In May of last year, the number of important COVID-19 papers published worldwide reached a peak of 24, and has remained at a few dozen per month since then. And May can also be regarded as a node for human beings to recognize the COVID-19. Previous studies have mostly involved the source of the virus, the location of the virus’s spread, the way and the prevention measures, etc. In May, a batch of biomedical studies on synthetic viruses and antibodies began to be published.

The spread of the virus among asymptomatic infections began to be one of the themes of important papers on the COVID-19 in June last year. In July last year, a study by Northeastern University in the United States showed that the new coronavirus is likely to begin to spread in the United States in December 2019.

Important papers on the mutation of the COVID-19 virus were published in the United States in July last year. Except for the United States, from November last year to April this year, the United Kingdom, Brazil, South Africa, Israel and other countries located in Europe, South America, Africa, and the Middle East have issued reports on the COVID-19 virus. The paper on virus mutations is also in line with the development trend of virus mutations spreading around the world.

As for the topic of the COVID-19 vaccine, before November last year, most of its important studies were animal experiments and were released sporadically; after November, as vaccines were introduced in some countries, a number of important papers on the effects of vaccines in preventing the development of the epidemic began to appear.

At the same time, the mutated virus began to “challenge” the vaccine. The Nature article shows that since January this year, debates over whether vaccines are effective against mutated viruses began to appear in the academic community. Some important papers indicate that vaccines may lose efficacy against new virus variants; other papers claim that virus variants have less effect on vaccine efficacy.

As of April 30, the last important nCOVID-19 paper summarized by Nature is still on vaccines, from the Public Health Agency of England. Studies have found that a single dose of vaccine can reduce the risk of transmission by nearly half.

It is understood that the United Kingdom is one of the countries closest to “herd immunity” in the world: The British Ministry of Health reported on May 7 that two-thirds of the country’s adult population had received the first dose of the COVID-19 vaccine. According to the statement made by the Director-General of the World Health Organization Tan Desai in February this year, the problem of unfair distribution of COVID-19 vaccines still exists globally: more than three-quarters of vaccinations occurred in 10, which accounted for nearly 60% of global GDP. Countries, and nearly 130 countries with 2.5 billion people have not even received a dose of the COVID-19 vaccine.

Combined with the recent outbreaks in South and Southeast Asian countries such as India and Nepal, it is not difficult to foresee that important papers on the COVID-19 will continue to be “published in batches” globally. Behind a large number of important academic achievements is the long-term path of mankind’s fight against the epidemic.