The Lancet: Russian satellite V COVID-19 vaccine was questioned, and then asked to disclose source data.

From August 11th last year, Putin announced that this satellite V vaccine made Russia the first country in the world to register a COVID-19 vaccine (and his daughter has been vaccinated), to the mid-term report of the phase 3 trial with an effective rate of 91.6%. Satellite Every step of V has been heatedly discussed by researchers and the public.

The past and present of the questioned satellite V vaccine

As early as June 2020, satellite V has been tested, jointly developed by the Gammar National Epidemiology and Microbiology Research Center and the Russian Direct Investment Fund (RDIF).

The satellite V vaccine is an adenovirus vector vaccine. The first dose uses the 26 type recombinant adenovirus (rAd26) vector, and the second dose uses the rAd5 vector, both of which carry the complete SARS-CoV-2 glycoprotein S. The foreign Johnson & Johnson’s nCOVID-19 vaccine, which is also an adenovirus technology route, also uses rAd26, and the Cansino COVID-19 vaccine of the domestic academician Chen Wei team chose rAd5 as the carrier.

The Phase 1 and Phase 2 clinical trial report [2] released in September 2020 showed that, regardless of the freezing or freeze-drying process vaccines, all 76 subjects developed antibodies against SARS-CoV-2 glycoprotein, and the serum binding antibody was positive. The conversion rate was as high as 100%. On the 42nd day, the positive conversion rate of serum neutralizing antibodies of all subjects who received two doses of immunization also reached 100%.

In addition, the test also detected the percentage of antigen-specific CD4+ T cells and CD8+ T cells in the subject, as well as the percentage of antigen-specific IFN-γ secreting cell populations in peripheral blood mononuclear cells to evaluate the cellular immune response induced by the vaccine. Show that the vaccine significantly enhances the body’s cellular immune response.

Only two weeks after the first and second phases of the satellite V vaccine data were published, also in the “Lancet” magazine, Temple University scholar Enrico Bucci published a commentary article [3] saying, “I studied satellite V with great interest. The results of the vaccine” but there are still several questions, including the specific measurement values ​​of each subject have not been disclosed, whether there are any patients who have recovered from the COVID-19, and the data of different subgroups have the same value, which ends on the same day as the enrollment is completed. Whether the test has enough time to detect antibody data, etc. 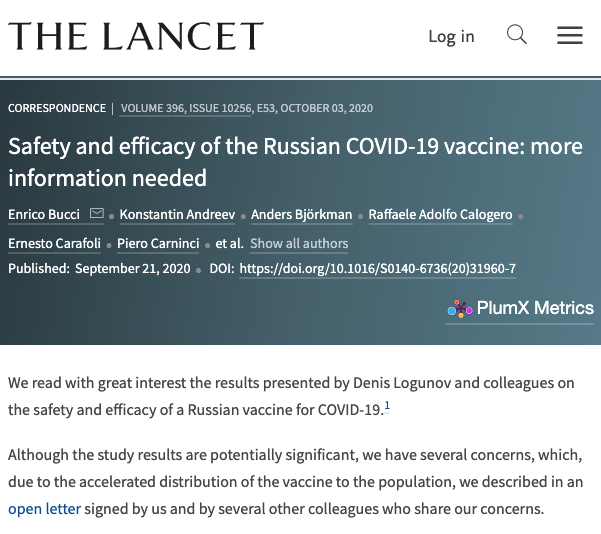 In response to this comment, satellite V experimenters sent a reply on the “Lancet” website on the same day [4], indicating that each individual data can be obtained from the Y-axis coordinates corresponding to the points in the figure.

As for the questioned question of “the same value appears in the result”, the experimenters said that the peak of the immune response after a single immunization appeared about 3 to 4 weeks later, at which time the immune index may enter a plateau.

As shown in part A in the figure below, the antibody titer is basically unchanged for 21-28 days after vaccination of rAdS-26 vaccine, and the value of antibody titer is generated in a small range (ELISA method), such as 800, 1600, 3200, 6400 Therefore, it is not impossible to have consistent values ​​in a small sample. 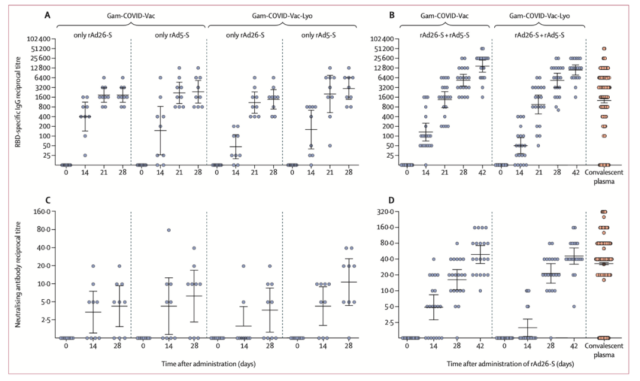 Before the Lancet published the data for the 3rd issue, the vaccine development center RDIF had released interim results when 39 infections occurred: the vaccine effective rate was 91.4%.

After the interim report is released, it is required to disclose the source data

In February this year, the satellite V vaccine phase 3 clinical trial released an interim report [5]: The vaccine has an effective rate of 91.6%, can avoid severe illness 100%, and shows almost uniform high effectiveness for all ages. 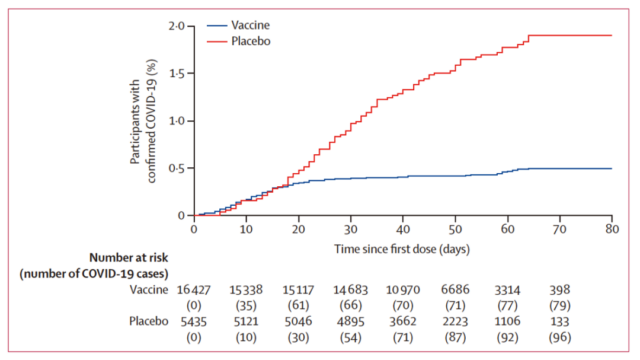 In addition to announcing the effectiveness, this interim report also describes some other data from the satellite V vaccine research.

The screening conditions of the satellite V test subjects are basically the same as those of other vaccine trials. Conditions include being older than 18 years old, never suffering from diseases such as Covid-19, HIV, and hepatitis B, and not being vaccinated 30 days before joining the group. From September 7th to November 24th, 2020, 21977 subjects passed the screening and were randomly divided into groups of 3:1 to receive the vaccine and placebo.

Excluding subjects who did not receive the second dose and deviated from the trial process, the interim report was analyzed based on the results of 14,964 subjects in the vaccine group and 4902 subjects in the placebo group. The primary endpoint is the infection of Covid-19 after vaccination Compared with indicators such as antibody titer and IFN-γ, the infection situation after vaccination can more intuitively reflect the protective effect of the vaccine. 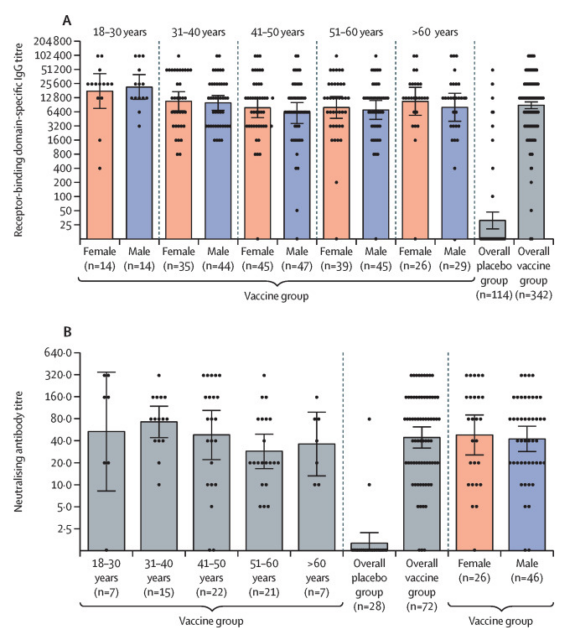 In addition, 68 serious adverse events were confirmed by the Independent Data Monitoring Committee (IDMC), and none of them were related to the trial. In addition, similar to the Phase 1 and Phase 2 trials, the interim report of the Phase 3 trial also showed the test results of humoral and cellular immune indicators of some subjects.

However, only three days after the interim report was released, Vasily Vlassov, an epidemiologist at the Russian Higher School of Economics, and others made comments and raised several specific questions about the interim report.

Questions include: the revision of data recorded by the satellite V trial on ClinicalTrails.gov was not described in the interim report; and the number of participants in the phase 3 trial has undergone several changes from the planned recruitment of 40,000 people to the actual inclusion of 21,862 in the interim analysis, and ” Analysis in a limited set of subjects may affect the final result.”

Three months later, Temple University E. Bucci and others once again issued the comment article mentioned at the beginning of this article [1] in The Lancet, requesting the satellite V test party to disclose the source data.

E. Bucci and others continued the views of the previous epidemiologist Vasily Vlassov and others, and asked questions about the test process, including how to judge “suspected Covid-19 cases”, how many amplification cycles the PCR test uses, etc., and proposed two specific points. Numerical problem: The sum of the number of people in each age group in the appendix table S1 is not equal to the total number listed in the table, and the same data appears in the two columns in the appendix table S3.

In Appendix Table S1, the sum of the number of people in each age group is 338, but the total number column is 342

In appendix table S3, the placebo group has exactly the same baseline data

Facing the question again, the satellite V experimenters also gave a reply on the “Lancet” website [6], stating that the interim data of the satellite V vaccine phase 3 trial “fully meets the requirements of clarity and transparency”.

This response mentioned that the number of people in the appendix table raised by the review article was “completely a typo.” It also explained the changes in the number of people recorded in ClinicalTrails.gov. Some people were excluded because the interim analysis had not yet completed randomization, or according to The established exclusion conditions will be eliminated.

The experimenter said that the PCR experiment was completed by a formal registered testing system in the hospital, and it seemed “strange” to ask about the number of PCR amplification cycles in the comments.

They pointed out that the results of trials conducted in Argentina suggest that people who have previously contracted Covid-19 can experience a rapid and significant increase in antibodies after receiving a dose of the vaccine.

In addition to the doubts and concerns mentioned above, the satellite V vaccine, as the world’s first COVID-19 vaccine to complete the registration, has also received affirmation and appreciation from the outside world many times.

Ian Jones and Polly Roy, life science scholars at the University of Reading in the United Kingdom, believe that satellite V is both safe and effective [7].

Hildegund C.J. Ertl, a scholar at the Weststar Institute in the United States, said that Satellite V can prevent severe infections by 100% is its most important feature, and Satellite V only requires ordinary cold storage, which will enable Satellite V to play a huge role in global anti-epidemic.

Almost at the same time as the review article and the satellite V tester were talking, on May 6th, the laboratory of the National Center for Epidemiology and Microbiology of Gamma announced Sputnik Light, which is a single injection of the first dose of satellite V (rAd26) vaccine The results of the study: As of 28 days after the injection, the effectiveness of Sputnik Light was 79.4%, which even surpassed the effectiveness of some two-dose vaccines. The CEO of RDIF said that he expects Sputnik Light to be put into formal use in India as soon as possible.

Currently, in addition to clinical trials in Argentina and India, satellite V vaccines have been put into use in some countries.

According to satellite V staff statistics, as of May 5, 2021, about 20 million people worldwide have received at least one dose of satellite V vaccine.