Cell blockbuster: Broad-spectrum anti-cancer therapy may be born, this protease of neutrophils can kill

The protease of neutrophils kills cancer cells without harming normal cells.   This study reveals the fundamental difference between human and mouse neutrophils in activating this elastase ELANE-mediated anti-cancer pathway, which is of great significance for the transformation of anti-cancer mechanisms in mice to humans.

Cancer is a genetic mutation disease that exhibits a high degree of genetic heterogeneity. In addition to overcoming this heterogeneity, eradicating cancer cells while retaining non-cancerous cells is still a difficult task. Therefore, it has always been a challenge to develop pan-cancer drugs that can combine multiple cancer types.

Our innate immune system can resist a variety of infectious pathogens, and the genetic variation of these pathogens far exceeds that of cancer. As a key effector of innate immunity, neutrophils can eliminate genetically heterogeneous pathogens. When infection or inflammation occurs in the human body, neutrophils will gather in the inflammation place and begin to phagocytose cells and bacteria, helping the body to resist infection Wait for the occurrence of diseases. And it has a similar function in cancer. However, the mechanism by which neutrophils kill cancer cells is not fully understood.

The research team found that neutrophil elastase ELANE can kill cancer cells with different genetic diversity and has minimal toxicity to non-cancer cells, which increases the possibility of developing it as a pan-anti-cancer therapy. 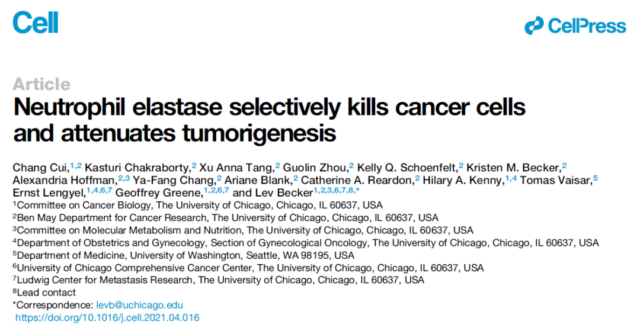 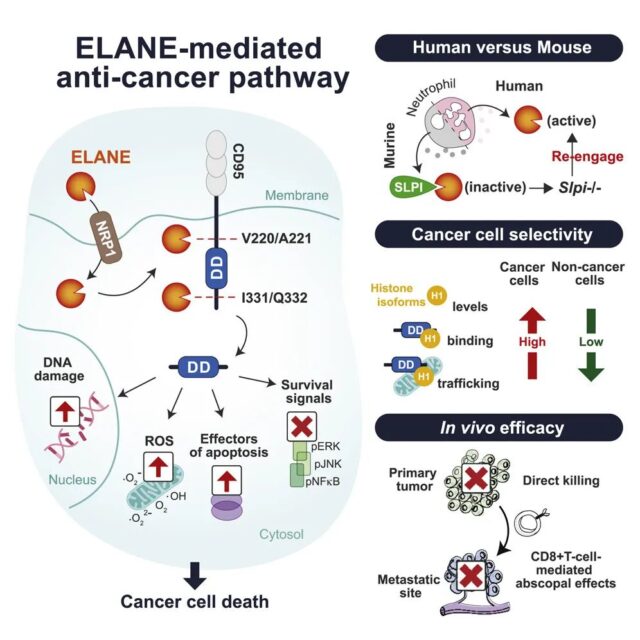 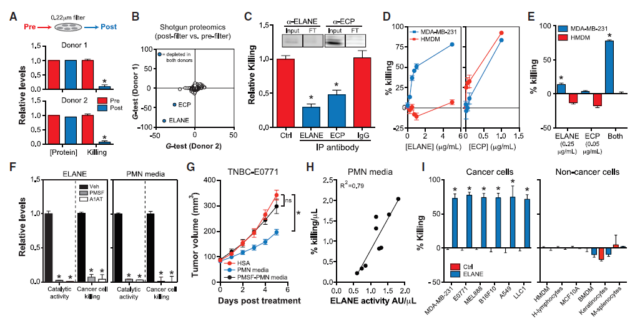 After determining that ELANE is an important anti-cancer protein released by human neutrophils, the research team explored whether the differences in ELANE biology between human and murine neutrophils could explain their killing power against cancer cells.

The research team found that mouse neutrophils release an inhibitor that inhibits the activity of ELANE. Knockout of the inhibitor gene can restore ELANE activity and its related anti-cancer function. These results reveal the fundamental difference between human and mouse neutrophils in activating this ELANE-mediated anticancer pathway.

Previous studies have shown that porcine pancreatic elastase (PPE) is an ELANE homolog with approximately 32% amino acid identity. Experiments have confirmed that, similar to ELANE, PPE selectively kills cancer cells, does not induce normal cell apoptosis, and does not affect body weight, spleen weight or liver function, showing the effect of improving disease.

Overall, the study revealed the fundamental difference between human and mouse neutrophils in activating this elastase ELANE-mediated anti-cancer pathway, which is useful for transforming the anti-cancer mechanism in mice to humans. It is of great significance. ELANE/PPE can kill genetically heterogeneous cancer cells while preserving host cells. By maximizing the therapeutic effect of ELANE/PPE, it can be used as a single anti-cancer therapy or a combined anti-cancer therapy.