The side effects of booster shot (3rd dose) are even smaller than the second shot!

Today, Israel, which has been at the forefront of the COVID-19 anti-epidemic, released the latest news. They began to provide the third shot for people over 60 years old 10 days ago as a strategy to fight against the Delta variant.

On August 8, Israel’s main local newspaper, Harretz, reported that as of last week, 422,326 people in that country had received the third shot!

However, just after the third shot of the vaccine, 14 people were infected with COVID-19, and two elderly people needed to be hospitalized for treatment, although it is unknown whether they were infected before the injection.

According to a Reuters report, Israel began to provide a third dose of Pfizer vaccine to people over 60 and people with weakened immune systems about 10 days ago.

Before the US FDA approval, Israel has become the third vaccine test field that has attracted worldwide attention.

Among the 420,000 people who received the third injection, 4,500 people answered the questionnaire.

These people all received the third dose between July 30 and August 1. 88% of them said that after the third dose of Pfizer, they felt that the side effects were similar to the second dose, or even fewer. !

Another 31% felt that the side effects were obvious, and the most common was the soreness at the injection site.

Another 0.4% felt breathing difficulties, and another 1% sought help from the hospital because of side effects.

Clalit, Chief Officer of Israel’s largest health service organization Ran Balicer said: “Although this is only a preliminary self-assessment survey, it shows that the side effects of the third injection are similar to the second injection, or even less!”

He continued: “Although we have not yet conducted long-term safety studies on the third dose of vaccines, for people over 60 years old, all we get are the benefits of vaccination, plus careful prevention in a closed space. I believe we will see progress.”

Without the support of any data, Israel dared to give the third shot, mainly because their epidemic rebounded too much.

This is already a terrifying number for a country that once added zero in May.

The Israeli residents who had just tasted the ban was beaten back to the pre-liberation period almost overnight, and the number of new cases surged back to the time when the vaccine was not given 4 months ago.

The arrival of the Delta variant completely disrupted the pace of Israel, and also allowed the Israelis to re-understand the COVID-19 virus with painful lessons.

Today, 14 Israelis who had just finished the third shot were diagnosed positive for COVID-19.

It is not yet clear whether these 14 people were infected with the virus before or after vaccination, and only 14 cases are not enough for health officials to use each case as a reference for the effectiveness of the third shot.

Among them, 2 people who were hospitalized were over 60 years old.

The Israelis believe that the blockade is not a solution to the problem.

They said that the government has seen people’s anxiety about life, and if the blockade continues, the residents’ economic problems will aggravate.

The Minister of Finance of Israel said: “Australia is in the eighth lockdown, but the number of cases is still increasing. It can be seen that lockdown is not a solution to the problem, but a vaccination is enough.”

This figure is slightly lower than Canada’s 72.3% for one dose and 61.8% for two doses, but it is far ahead of the world. 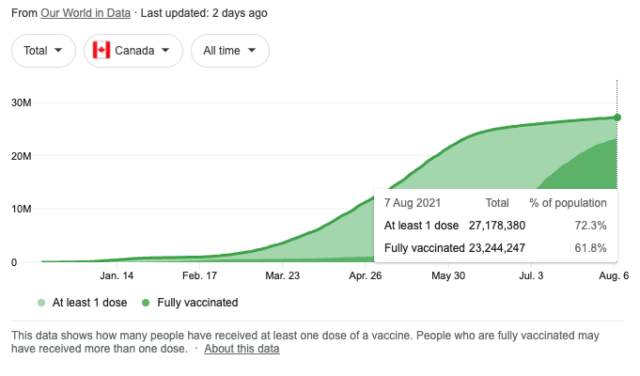 Recently, as many as 11 countries have announced that they will start the booster shot(third dose), including the United Arab Emirates, the United Kingdom, the United States, Germany, Cambodia, Thailand, France, Russia, Switzerland, Singapore, and even Indonesia.

So what are the side effects of the third injection? How much will the protection rate increase after playing? Will Canada follow up? Let us wait and see.

Booster shot in Israel: Less side effects and still 14 infected after vaccinated