Why does Merck Molnupiravir become the new hope to end COVID-19?

Why does Merck Molnupiravir become the new hope to end COVID-19?

Citing Reuters news on October 5, Marco Cavaleri, head of vaccines at the European Medicines Agency (EMA), said that EMA will consider whether to initiate a rolling review of Molnupiravir in the next few days. Consider evaluating whether the data supports such a rolling review.

Prior to this, the phase III clinical results of Molnupiravir caused widespread public concern. According to Merck and Ridgeback, if Molnupiravir is administered to high-risk groups in the early stages of infection, the risk of hospitalization or death can be reduced by 50%.

In March 2020, Ridgeback was authorized by Molnupiravir prodrug EIDD-2801. Early studies confirmed that the drug showed broad-spectrum activity against many RNA viruses, including influenza, hepatitis C, Ebola virus, chikungunya virus, equine encephalitis, and coronaviruses such as SARS-CoV-1 and MERS. In May of the same year, Merck, who had broken down in the field of COVID-19 vaccines, joined in to jointly develop EIDD-2801 with Ridgeback, and began phase II/III clinical trials in October.

Under the recommendation of the Independent Data Monitoring Committee and after consultation with the FDA, Merck terminated the recruitment of this study ahead of schedule. Merck and Ridgeback stated that they will submit a Molnupiravir emergency authorization (EUA) application to the FDA “as soon as possible” and will also submit applications globally.

Affected by this, the secondary market has clearly differentiated. Merck’s stock price immediately rose by more than 8%, the largest increase in 12 years, with a market value exceeding US$200 billion; Regeneron, Vir Biotechnology, Moderna, BioNtech, CureVac and other concept stocks such as COVID-19 vaccines and neutralizing antibodies have plummeted.

Although Molnupiravir achieves the effect of inhibiting the virus by inserting the virus’s RNA chain to make the virus mutate, it may cause the host’s DNA mutation, especially in mammalian cells, causing mutations at lower concentrations, leading to the risk of cancer and other diseases. But these worries have not overshadowed people’s expectations for it.

The COVID-19 vaccine of different technical routes has made breakthroughs, but the world has not yet completely reopened. In the transition from prevention to treatment, the end of the COVID-19, human beings hardly wait for COVID-19 drugs for a long time.”

01. The possibility of daily treatment

If it is successfully approved for marketing,  Molnupiravir will become the world’s first oral small molecule therapy for COVID-19 drugs.

Anthony Fauci, an American infectious disease expert and director of the National Institute of Allergy and Infectious Diseases, vividly predicted that this will change the treatment of the COVID-19, just like getting a prescription for Tamiflu after catching the flu: “I woke up in the morning, I didn’t feel good, smell and taste disappeared, and sore throat. I called my family doctor and said,’I have the COVID-19, please write me a prescription.’”

The current programs on the market are mainly remdesivir and neutralizing antibody therapy. With the deepening of research, Redcivir, which is of little benefit to patients with COVID-19s, is losing the favor of clinicians. Although Regeneron’s monoclonal antibody therapy is licensed for subcutaneous injection, most of them still require intravenous infusion, which makes many patients unable to receive timely treatment in hospitals and clinics.

“I think (Molnupiravir) this will save thousands of lives worldwide. In those places, people have fewer access to monoclonal antibodies, and the same is true in the United States.” Stanford University infectious disease expert, antiviral Therapist Robert Schaefer said in an interview with The New York Times.

In terms of price, Merck and the US government reached an agreement in June this year. Once Molnupiravir obtains the EUA, the US government will purchase 1.7 million courses of the drug at a price of US$1.2 billion, which translates to US$700 per course. Although it is still not cheap, in horizontal comparison, this is about one-third of the current cost of regenerating monoclonal antibody treatment.

In addition, Merck has also reached licensing agreements with five Indian generic drug manufacturers to accelerate drug supply in more than 100 low- and middle-income countries. Merck said that it will use a “tiered pricing method,” and the pricing of the drug can reflect the ability of countries to pay for the drug.

Merck’s vice president Daria Hazuda told reporters on the conference call: “We are committed to ensuring that people have access to this drug.” Merck has already begun to produce the drug at full capacity and hopes to produce 10 million by the end of this year. A course of medication.

Compared with Remdesivir, another important advantage of Malnupiravir is that the structure is simpler, there is no complex phospholipid prodrug part (Protide), and the synthetic route is simpler. It can be obtained by simple amino conversion through cheap cytosine, which is easy to produce quickly and in large quantities.

If low production costs provide the basis for a wide range of COVID-19 treatments, then at the mechanism level, Malnupiravir has a more solid therapeutic support.

As mentioned earlier, Molnupiravir kills the new coronavirus by blocking the synthesis of RNA polymerase (RdRp). What’s more worth mentioning is that it can fight a variety of viruses, which means it can also be used to treat other viral infections. And, the most intriguing feature is that Molnupiravir seems to have a high barrier to resistance. 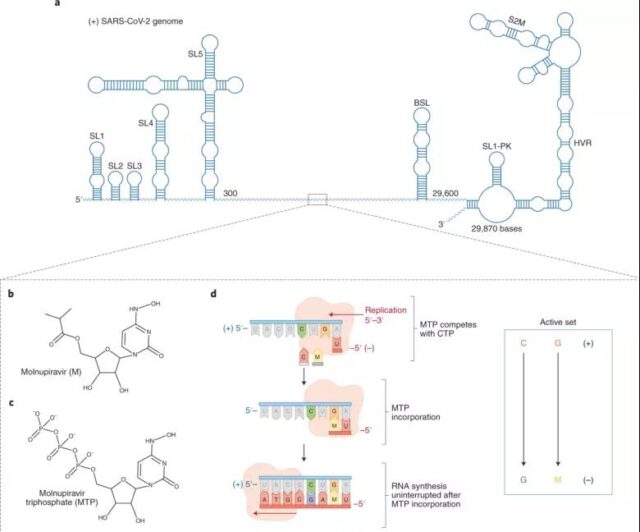 Usually a drug will force the virus to rapidly develop a mutant that is not affected by the drug, thereby rendering the drug ineffective. In laboratory tests, although “expected” to produce mutants, it was not found that Molnupiravir promoted drug resistance in animals. In other words, Molnupiravir is effective against all varieties, including Delta mutant strains.

According to a new study submitted by Merck, the mutation of the viral spike protein does not affect the activity of Molnupiravir. Merck pointed out that both in vitro and clinical data show that Molnupiravir has the potential to treat SARS-CoV-2 variants, especially when receiving treatment at the initial stage.

From a historical perspective, in the treatment of many major viruses such as HIV, HBV, HCV and other diseases, nucleoside antiviral drugs are undoubtedly the most important class of antiviral drugs.

Generally, the polymerase of the virus is less prone to mutation than the surface protein of the virus. The binding site of nucleoside antiviral drugs is the active area of ​​polymerase, so the development of nucleoside antiviral drug resistance is relatively slow, which is why Malnupiravir has high inhibitory activity against a variety of mutant strains.

Although Merck, as the four major vaccine giants, is not satisfactory in the development of the COVID-19 vaccine, from the clinical layout of Malnupiravir, the strength of the old MNC can still be seen.

In the design of the Molnupiravir clinical trial, the inclusion criteria are laboratory-confirmed mild to moderate COVID-19, at least one risk factor related to the severity of the disease (such as obesity, age> 60 years, diabetes, and heart disease), and symptoms Appeared within 5 days before randomization. The main efficacy indicator is the percentage of hospitalizations and/or deaths within 29 days after randomization-this is the real clinical benefit.

Part of the above success comes from the selection of the right subjects in the Molnupiravir study.

As a viral infection, the antiviral treatment of the COVID-19 must be timely. Molnupiravir selected subjects with symptoms within 5 days, because once the antiviral window is missed, the symptoms of COVID-19 pneumonia are mainly caused by the body’s immune response. At this time, whether there is a virus in the patient’s body is not the first thing to deal with.

At the same time, due to the low hospitalization and mortality caused by the new coronavirus among healthy young people, selecting subjects with advanced age, obesity, and other underlying diseases can reduce the sample size.

On the other hand, Merck has adopted the Adaptive Design method and used the results of the interim analysis to report. Adaptive Design itself will lead to an increase in the total sample size, which is its risk. However, Merck has accelerated the application and approval of Molnupiravir from the clinical level through risk analysis.

In addition to the European Union, Molnupiravir has attracted the attention of other drug markets.

According to the “Wall Street Journal” report, Merck has signed an agreement with the Singapore government to provide Molnupiravir to Singapore once certain regulatory milestones are reached.

According to the Nikkei News, the Japanese Ministry of Health, Labour and Welfare is negotiating the purchase of Merck’s Molnupiravir, with a view to approving its use within this year.

If Merck applies for the drug to be used in Japan, the Ministry of Health, Labour and Welfare of Japan will consider rapid approval.

There is still a huge gap in the field of COVID-19 treatment. Molnupiravir’s first victory in the first battle undoubtedly rekindled people’s hope for ending this global pandemic.

At this stage, Pfizer’s PF-07321332, Roche/Atea’s AT-527, and Shiono’s S-217622 have performed well in small-scale trials, and the results of phase II/III trials are also worth looking forward to. Through the combination of vaccines and oral antiviral drugs, humans are expected to defeat the new coronavirus in the near future.

Why does Merck Molnupiravir become the new hope to end COVID-19 ?