AI Technology is changing the rules of drug development

AI Technology is changing the rules of drug development, In less than 40 days from announcing a partnership to hitting a milestone!

Only 40 days from announcing the partnership to the first milestone

As of February 2022, related cooperation in the field of AI drug has disclosed a total amount of up to 7.983 billion US dollars, including Sanofi, Amgen, Merck, AstraZeneca, Pfizer and many other multinational pharmaceutical companies have chosen to cooperate with AI. Cooperation with new drug development companies.

From 1981, when “Discovery” first reported on computerized drug development (CADD) , to “Science” in 2021, when “Science” named AI’s prediction of protein structure as one of the top 10 scientific discoveries of the year.

In the past 40 years, artificial intelligence drug research and development has gradually moved from people’s imaginations. in laboratories around the world.

We searched PubMed for AI drug-related papers, and we can find the development of AI drug theory from “0” to “1” from 1990 to 2021. During this period, the amount of related literature data has increased from less than 400,000 to over 1.6 million, and the technical theory has become more and more mature.

Relevant achievements have gradually attracted more attention, which has also laid a solid foundation for the development of AI drug in practice.

The development of AI drug theory from 1990 to 2020, source Deep Pharma Intelligence

At the same time, the traditional way of pharmacy is mired in the inverse Moore’s Law (Eroom’s Law) , which means that despite decades of increased investment by pharmaceutical companies, the number of new drugs on the market for a $1 billion investment is halved every 9 years. Long cycle (10-15 years) , high investment (>1-2 billion US dollars) , and low success rate (<5%) have become the three major pain points in new drug development.

These high-light moments not only established coordinates for the development of AI drug, but also brought new opportunities for the transformation of traditional pharmaceuticals.

AI drug is changing the game

On average, the interval between a new drug’s development and its launch is about 12 years, and the development period and the patent protection period it enjoys after listing are trade-offs, especially for huge sales. of new drugs, sometimes just a day late in the market can mean a loss of $1 million in annual revenue.

We can understand the penetration of artificial intelligence into drug R&D, especially early drug discovery, from several dimensions. It mainly includes: 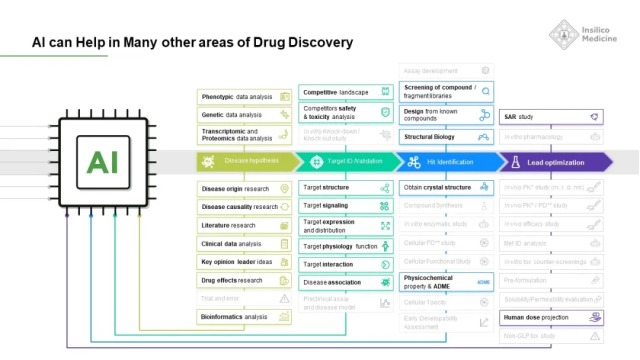 Among them, target discovery and early drug discovery mainly include analyzing data sets, forming hypotheses and generating new insights, identifying new drug candidates, analyzing sample data of healthy and diseased subjects to discover new biomarkers and Therapeutic targets; in the design, generation and optimization of small molecule compounds, that is, using algorithms such as neural networks to extract the characteristics of compounds at different levels, and then make further predictions based on these characteristics; in clinical trial design, intelligent algorithms can optimize clinical trials.

In research design, it can also analyze medical records to identify patients who may benefit from new treatments and find ideal subjects for clinical trials; in the reuse of existing drugs, artificial intelligence systems can quickly identify many known drugs. New indications, so that old drugs can be used for new purposes.

From the discovery of lead molecules to the optimization of lead molecules, to clinical research, artificial intelligence can accelerate multiple links in new drug development, and reduce research and development costs. , has shown great potential in accelerating the R&D cycle and improving the success rate of R&D.

AI drug enters the verification period, and the delivery of cooperation milestones is coming one after another

When the number of AI-pharmaceutical collaborations increased exponentially, few outstanding collaboration results were made public, which once aroused concerns and doubts from the outside world.

As introduced at the beginning of this article, after more than a month, Insilicon and Fosun Pharma officially announced that they had reached the first milestone, which undoubtedly injected a boost to the verification of AI-pharmaceutical cooperation.

According to the pipeline disclosed by the listed AI drug company Exscientia, it takes an average of 13.7 months to reach the PCC stage after the start of the cooperation project.

The QPCTL project of the cooperation between Insilicon and Fosun Pharma took a total of 9 months from the start to the nomination of PCC. time , and this speed has been significantly improved compared to the 4.5 years in the industry.

Another set of numbers is also for reference. Not long ago , in a retrospective article published by BCG Consulting in “Nature Reviews Drug Discovery” , analysts found most artificial intelligence projects in less than 4 years based on the time of patents, publications and public statements.

Completed the entire journey from drug discovery to preclinical in the span of 20 years . Such initial data is still very good compared to the historical timeline of 5-6 years in the industry. The huge potential of AI drug is being unleashed

In the current tide of IT+BT cooperation, artificial intelligence technology has undoubtedly brought a new paradigm for new drug research and development.

With the deepening of cooperation between pharmaceutical companies and AI drug companies, more effective data will be generated, and diversified in-depth algorithms and technologies will be verified to achieve gratifying results in a short period of time. Artificial intelligence is expected to deeply empower all aspects of pharmaceuticals until it covers the entire industry chain.

We look forward to the gradual normalization of artificial intelligence pharmaceuticals, and we also hope that such a paradigmatic synergy will spread from early drug discovery to drug accessibility as soon as possible, effectively benefiting patients around the world.

AI Technology is changing the rules of drug development