CAR-T cell therapy is a type of cellular immunotherapy, which refers to the transfer of genetic material with specific antigen recognition domains and T cell activation signals into T cells through gene cloning technology, so that T cells can interact with specific antigens on the surface of tumor cells.

Combined with direct activation methods. CAR-T cells have been successfully used to treat circulatory malignancies, such as B cell-derived malignancies.

After the success of CAR-T therapy, people have applied the CAR strategy to NK cells, and developed CAR-NK cell therapy similar to CAR-T therapy.

The two main cell types of the mononuclear phagocyte system ( MPS ) are monocytes and monocyte-derived macrophages, both of which have phagocytic functions.

MPS selectively engulf external targets such as microorganisms, however, macrophages are unable to recognize and attack tumors.

Even within tumor tissue, macrophages do not play a role in phagocytosis or antigen presentation, but instead switch to the immunosuppressive M2 type, preventing the immune system from clearing tumor cells.

In view of the current success of CAR-T cell therapy and the development potential of CAR-NK cells, researchers have developed great interest in developing CAR macrophages ( CAR-M ) for tumor immunotherapy.

The emergence of CAR-M has opened up new possibilities for the treatment of solid tumors: modifying human macrophages with specific CARs to enhance the phagocytic activity and antigen presentation of macrophages to tumors.

Various attempts have been made to use CAR-M to treat cancer. The researchers designed chimeric antigen receptor phagocytes ( CAR-Ps ) that direct macrophages to engulf specific target cells. 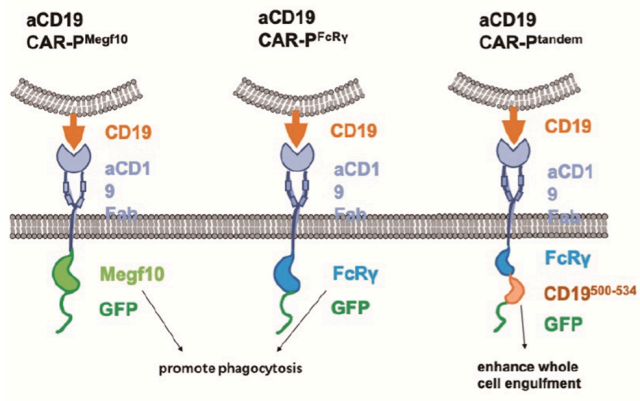 Studies have shown that CAR-P expressing the intracellular domain of Megf10 or FcRv can promote the phagocytosis of target antigens.

Previous studies have found that PI3K signaling plays an important role in the endocytosis of large targets and can promote the phagocytosis of macrophages. The researchers linked the pI3K p85 subunit to CAR-P-FcRv to form a “tandem” CAR ( CAR-Ptandem ). CAR-Ptandem has better whole-cell phagocytosis. 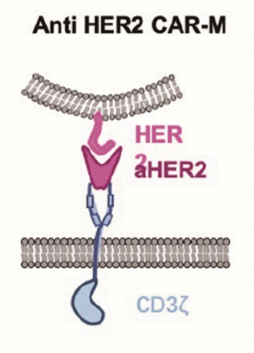 In a humanized mouse model, HER2-CAR-M was also found to be able to convert M2 macrophages into M1 macrophages, induce an inflammatory tumor microenvironment, and enhance the anti-tumor cytotoxicity of T cells. In addition, it was also found that HER2-CAR-M may generate epitope spread, providing a new idea for avoiding tumor immune escape. 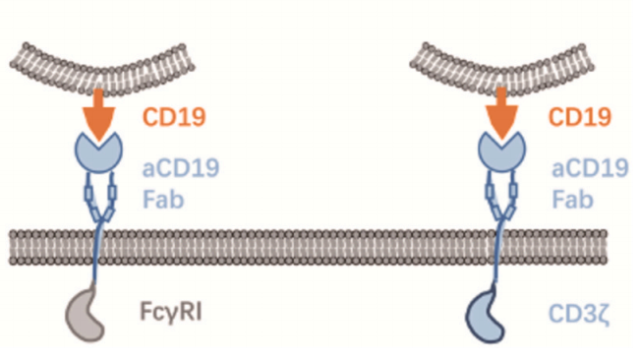 However, in the presence of specific antigens such as CD19, CAR-mediated signaling promotes phagocytosis of CAR-iMacs and leads to the conversion of CAR-iMacs to the pro-inflammatory M1 phenotype. iPSC-derived macrophages may become an important cell source for immunotherapy of myeloid tumors. 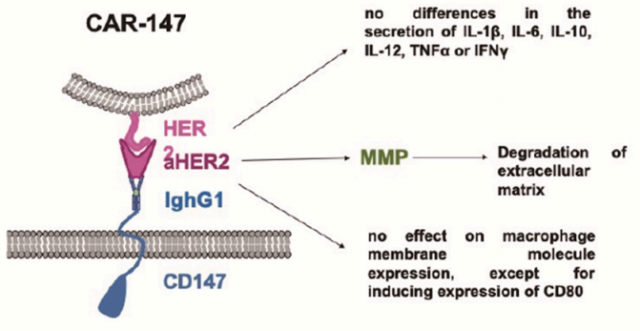 An important reason for the ineffectiveness of CAR-T in the treatment of solid tumors is that it is difficult for T cells to enter the tumor tissue.

This is because the physical barrier formed by the extracellular matrix ( ECM ) of solid tumors prevents T cells from entering the tumor tissue.

The researchers designed the structure of a CAR-147 consisting of a single-chain antibody targeting human HER2, the hinge region of IghG1, and the transmembrane and intracellular regions of the mouse CD147 molecule.

Clinical application of CAR-M in the treatment of solid tumors

As of November 2020, two clinical trials based on CAR-M strategies have been approved by the FDA. The first is the drug candidate CT-0508 from CARISMA Therapeutics, which treats patients with relapsed/refractory HER2-overexpressing tumors with an anti-HER2 CAR-M ( Phase I clinical trial ).

The other is Maxyte’s MCY-M11, which uses mRNA transfected PBMCs to express CARs targeting mesothelin ( including CAR-M ) for the treatment of patients with relapsed/refractory ovarian cancer and peritoneal mesothelioma, and is currently recruiting volunteers Phase I clinical trials are being conducted.

Regarding the clinical translation of CAR-M, there are several aspects to note: First, the safety and efficacy of CAR-M are the foundation of this therapy.

Although it has been verified through animal experiments, the effect of CAR-M in humans The safety and efficacy remain to be verified; secondly, reliable cell source and expansion are necessary conditions for the clinical application of CAR-M, which can be prepared from PBMCs or iPSCs.

In addition, unlike T cells, macrophages have a lower risk of GVHD, which means that products can be produced in advance for patients to use on demand.

Third, there is another problem that must be considered. At present, CAR-M mostly adopts the method of virus transfection, which may induce insertion mutation.

CRISPR/Cas9 provides a new possibility to solve this problem, which can be completed in only one week. CAR-T gene editing.

Advantages and Challenges of CAR-M

Currently, studies on extracellular signaling domains are mainly focused on several common tumor targets, such as CD19 and HER2.

Unlike CAR-T cells, CAR-M cells have the following three advantages.

1) T cells cannot enter the tumor environment due to the physical barrier formed by the matrix surrounding tumor cells, whereas macrophages can visibly infiltrate the tumor environment. TAMs play important roles in tumor invasion, metastasis, immunosuppression, and angiogenesis. CAR-M can reduce the proportion of TAM, affect the cell phenotype of TAM, and have a positive effect on tumor treatment.

Although CAR-M has great potential as a powerful tumor immunotherapy approach, many problems need to be overcome to achieve the desired effect.

The first is the limitation of cell numbers: macrophages do not proliferate either in vitro or after injection in vivo.

Patients can only receive a limited number of macrophages, which may affect treatment effectiveness. The second is related to the migration characteristics of macrophages in vivo.

After injection, exogenous macrophages pass through the lungs and then mostly remain in the liver, which is not beneficial for cancer treatment.

The third is the complex tumor microenvironment. Although CAR-M has achieved good results in mouse models, the actual tumor microenvironment in humans is much more complex than animal models. Finally, the expression of target antigens may be insufficient due to the high heterogeneity of tumor cells. This problem has always been prominent in CAR-T therapy.

Clinical studies have found that most tumor cells removed by CAR-T cells have high levels of target antigen expression.

It is foreseeable that this will also become a major obstacle to the development of CAR-M therapy.

CAR-M therapy has shown its effective anti-tumor ability in animal experiments. Compared with CAR-T and CAR-NK, CAR-M as a new cellular immunotherapy has its unique advantages, but there are also many shortcomings to be overcome.

Therefore, attention should be paid to maximize the efficacy and safety of CAR-M in future clinical treatment.

We have reason to believe that with the further development of science and technology, CAR-M will soon show efficacy in patients, adding more power to tumor immunotherapy!