Tumor immunotherapy brings new treatment methods and hopes to cancer patients, and has been successfully applied in a variety of tumor types.

One of the important reasons is that the function of T cells in the tumor microenvironment has been in an irreversible disorder.

Studies have shown that tumor-associated macrophages are one of the main forces that induce T cell dysfunction.

As a member of immune cells, macrophages are often affected by tumors after entering the tumor microenvironment, and transform into a state that promotes tumor growth and inhibits T cell function, but its regulatory mechanism is still unclear.

As the most abundant type of modification on mRNA in eukaryotic cells, m6A modification can precisely regulate cell function through processes such as affecting mRNA stability and translation efficiency.

However, recent work has also found that the m6A modification system is in a state of imbalance in many types of tumors.

So, does m6A modification affect the function of tumor-associated macrophages and participate in the regulation of T cell function?

Researcher of the Beijing Institute of Genomics of the Chinese Academy of Sciences (National Center for Bioinformatics) Han Dali’s research group and Xu Meng’s team, researcher of the Institute of Immunology of Tsinghua University, published the title The loss of RNA N6-adenosine methyltransferase Mettl14 in tumor-associated macrophages The research paper promotes CD8+ T cell dysfunction and tumor growth reveals a new mechanism for specific tumor-associated macrophages to regulate CD8+ T cell function at the epitranscriptome level: the role of m6A methylase METL14 in C1q+ macrophages Loss, resulting in the decrease of m6A modification on the Ebi3 transcript in macrophages and the increase of EBI3 expression, which in turn induces the dysfunction of tumor-infiltrating CD8+ T cells. 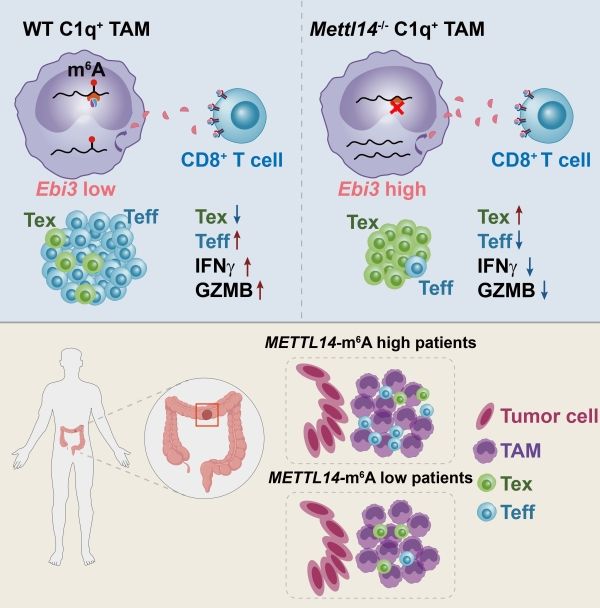 Studies have found that there is a subgroup of C1q+ macrophages in tumor-associated macrophages, which interact with T cells through immunomodulatory receptors on the surface. Genes related to m6A modification are enriched in the C1q+ macrophage subpopulation (such as Mettl14).

Further exploring the role of m6A modification in macrophages, the researchers found that the anti-tumor ability of mice that specifically knocked out Mettl14 in macrophages was lower than that of wild-type mice, and the proportion of CD8+ T cells infiltrated by tumors was significantly reduced. Single-cell sequencing data showed that, compared with the wild-type control group, the absence of Mettl14 in macrophages can lead to a significant reduction in the infiltrating effector CD8+ T cells and exhaustive T cell precursor cells in the immune microenvironment, while the activation is abnormal and The dysfunctional intermediate CD8+ T cells increased significantly.

The results showed that macrophages lacking Mettl14 induced CD8+ T cell dysfunction by increasing the expression of EBI3. In order to explore whether the above conclusions are applicable to patient tumor samples, the researchers first used multicolor immunohistochemical staining techniques to find the close relationship between macrophages and CD8+ T cells in tumor samples of colon cancer patients.

In summary, this study reported a new mechanism for the dysregulation of RNA m6A modification in tumor-associated macrophages that leads to the up-regulation of EBI3 expression and promotes the dysfunction of CD8+ T cells.