Nature: The results of the first genetically modified mosquito experiment in U.S. announced.

A few days ago, Oxitec announced that it has completed the first open-air study of genetically modified mosquitoes in the United States.

The experimental results are positive, but larger-scale research is still needed to determine whether these genetically modified mosquitoes can achieve the ultimate goal of suppressing wild mosquitoes that may carry pathogens.

Since April 2021, Oxitec has been conducting experiments on transgenic mosquitoes on Florida Keys, the Heat Island Islands in southern Florida, USA, during which nearly 5 million transgenic Aedes aegypti mosquitoes have been released successively , and the monitoring of almost all release points has been completed.

Wild Aedes aegypti mosquitoes can carry a range of infectious and deadly viruses, including chikungunya, dengue, Zika and yellow fever, so scientists have been looking for ways to reduce mosquito populations.

When these transgenic male Aedes aegypti mosquitoes are released into the environment, they will Mating with wild female Aedes aegypti, their female offspring will die before reaching adulthood.

Half of the male offspring also carry the self-limiting gene, which continues to mate and kill the female offspring of Aedes aegypti.

The researchers placed a number of genetically modified mosquito incubators in the Florida Keys and placed nearby traps that were used to attract wild female Aedes aegypti to lay their eggs.

The researchers found that these transgenic male Aedes aegypti mosquitoes typically fly within a hectare of the hatchery box, the same range as wild Aedes aegypti.

These transgenic males mate with wild females and lay their eggs in traps, as well as in flower pots, trash cans, discarded beverage bottles and more.

In addition, the transgenic male Aedes aegypti mosquitoes were also transfected with a fluorescent protein gene, which is inherited by all their offspring, and can emit a distinct red fluorescence under certain lighting, which can be used to distinguish which are wild mosquitoes and which are transgenic mosquitoes. 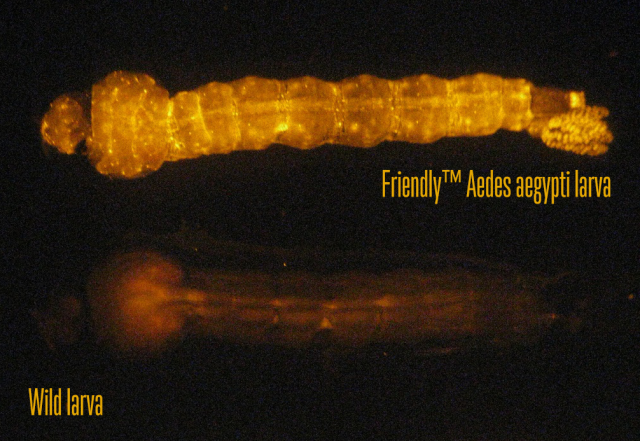 The researchers collected more than 22,000 mosquito eggs from the traps and brought them back for experimental incubation.

The results showed that all female Aedes aegypti mosquitoes that had inherited the self-limiting gene died before reaching adulthood.

In addition, the team found that the lethal, self-limiting gene persisted in wild populations for two to three months, or about three generations of mosquito offspring, before disappearing.

The Florida Keys Mosquito Control District (FKMCD) committee is very supportive of this experiment, and they believe in protecting the people and the economy of the islands as much as possible, trying new things, and finding any tools that might help.

Male mosquitoes infected with the bacteria can mate with female mosquitoes, but fail to produce hatchable eggs, suppressing mosquito populations.

It is reported that Oxitec ’s new experimental program in Florida and California was approved by the U.S. Environmental Protection Agency in March 2022 and is currently awaiting permission from the two states.

The results of the first genetically modified mosquito experiment in U.S. announced