New Zealand announced the abandonment of the COVID-19 lockdown policy

New Zealand Prime Minister Jacinda Ardern announced on November 22 that under the new epidemic prevention strategy, he will no longer be obsessed with complete “clearing” and will end the three-and-a-half month lockdown of Auckland, the largest city, early next month.

Agence France-Presse reported that Arden stated that from 11:59 pm on December 2nd, New Zealand will adopt COVID-19 (coronavirus disease 2019) prevention measures. This strategy was first proposed last month, and the goal is to contain the highly infectious Delta mutant strain, rather than completely eliminate it. 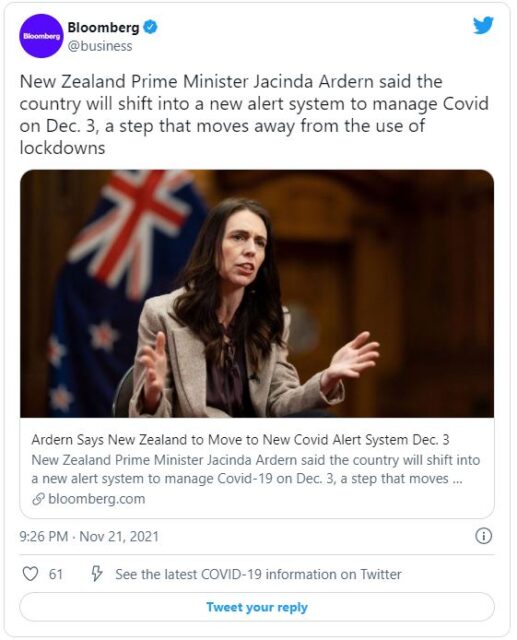 She told reporters: “The cruel fact is that the Delta mutant is here and will not be far away. Although no country can completely eliminate the Delta mutant, New Zealand is better prepared than most countries to fight.”

Up to now, the Ardennes government’s anti-epidemic strategy has been trying to “zero out”, such as adopting strict measures such as lockdowns, epidemic investigations, and border control.

Under the zero-clearing strategy, only 40 of New Zealand’s population of 5 million died of illness. However, as the lockdown time has lengthened, the pressure of calls for unblocking has increased. Auckland first broke out of the Delta mutant strain in mid-August, and the city has been closed since.

Arden’s initial plan was to implement new epidemic prevention measures when New Zealand’s vaccine coverage rate reached 90%. However, despite the current coverage rate of about 83%, she still set December 2 as the release date.

Under the new three “signal lights” system, the green light means that there are almost no epidemic prevention restrictions, and the red light means that commercial activities are still open, but customers must vaccinate and comply with social distancing regulations.

Alden said: “The main difference between the two systems is that places such as bars, gyms and restaurants will soon require vaccine passes.”

She said that Auckland will be placed under the red light system at the beginning, and officials are still deciding how to classify other areas. Auckland is currently isolated from the rest of New Zealand and is expected to open on December 15.

New Zealand announced the abandonment of the COVID-19 lockdown policy