Pfizer’s COVID-19 vaccine: 4 volunteers paralyzed after vaccination. The preparation of Pfizer’s COVID-19 vaccine has entered the final stage. According to news, it is expected that Pfizer vaccine will pass the emergency use authorization application in the United States this week. In addition, due to the eagerness of countries around the world to control the epidemic, Pfizer has received hundreds of millions of vaccine orders from many countries, and the United Kingdom has officially launched Pfizer’s COVID-19 vaccination work on December 8. It is expected that the vaccine will be launched on a large scale in the near future. Use, but at this critical moment, Pfizer vaccine has some “problems”.

According to the Global Times on the 9th, the US Food and Drug Administration said this week that four Phase-3 volunteers who received Pfizer’s COVID-19 vaccine developed Bell’s Palsy, that is, facial paralysis. 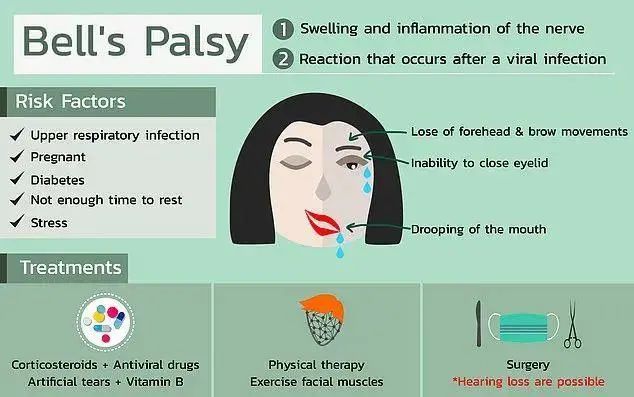 Among the four patients with Bell’s palsy, the first patient developed Bell’s palsy within three days after the injection, and the remaining two patients also developed the disease one after another, but all three patients were between 10 and 10 years old. Recovery within 21 days. At present, the exact reason is not clear, but it is speculated that it may be due to viral infection that causes facial nerve inflammation. The mutation of herpes virus may be one of the reasons for this situation.

It is worth mentioning that in the trial of 21720 people vaccinated with Pfizer vaccine in the United States, Pfizer’s COVID-19 vaccine only found 4 cases of this situation, and none of the 21,728 people who received placebo vaccine.

In this regard, the US Food and Drug Administration (FDA) stated in its report that the frequency of 4 cases in the vaccine group was not higher than the overall expected number. The report believes that all people with facial paralysis happen to be in the vaccine group. No matter what the vaccine is, the same number of people are likely to get the disease. The agency also stated that there is no clear evidence linking vaccines to uncomfortable medical conditions.

Despite this, the federal regulatory agency recommends “monitoring Bell’s palsy cases and deploying the vaccine to a larger population.” Among Pfizer vaccine clinical trial participants, 63% of trial subjects became tired after receiving the injection. 55% said they had headaches, 32% of the participants reported chills, 24% complained of joint pain, and 14% had fever.

People with a history of “severe” allergies should not be vaccinated

On Wednesday, local time, the US Food and Drug Administration released a 53-page report that analyzed the vaccine trials of Pfizer and BioNTech in detail. Documents show that two people who received the trial vaccine died during the trial. The other four patients who died received a placebo injection.

At present, the agency believes that Pfizer’s test results have not brought new safety issues, and the agency has not questioned the effectiveness of the vaccine. The report stated: “The probability of death in the general population of different age groups is similar.”

The British Medicines and Health Regulatory Agency (MHRA) has not yet questioned the safety of Pfizer vaccines. The agency stated that the overall safety of the COVID-19 vaccine is similar to other routinely used vaccines. “Unless (the vaccine) meets the expected safety, quality and effectiveness standards, the UK will not authorize the supply of the vaccine.”

A Pfizer spokesperson said that its vaccine was “well tolerated” and “no serious safety issues” during the trial. He also pointed out that so far, the trial has registered more than 44,000 participants, of which more than 42,000 have received the second vaccination. In the key Phase 3 clinical trial, the vaccine was generally well tolerated, and the independent data monitoring committee reported that there were no serious safety issues.

But according to the latest news from the Russian Satellite News Agency and British Sky News, two British NHS health workers developed symptoms similar to allergic reactions after being vaccinated on the 8th and are currently recovering.

According to the report, the British Medicines and Health Administration has issued guidance to the British National Medical Service System, stating that anyone with a history of “severe” allergies to drugs, food or vaccines should not be vaccinated. From the 9th, all scheduled acceptance Patients with the vaccine will be asked if they have a history of allergies. It is reported that the elderly in the elderly care institutions, the elderly over 80 years old and the staff of the elderly care institutions will be able to receive the first batch of COVID-19 vaccine in the hospital.

California nurse suspected of contracting the COVID-19 after vaccination

with serious side effects

Recently, according to overseas network reports, a nurse in California said that the side effects of her vaccination with Pfizer were extremely serious, especially after the second shot, she felt “dizzy, cold, nauseous, and splitting headache.” After participating in the clinical trial of Pfizer’s COVID-19 vaccine, she suspected that she might be infected with the COVID-19 virus.

A nurse in California said that after participating in Pfizer’s clinical trial of the COVID-19 vaccine, she suspected that she might be infected with the COVID-19 virus.

According to the New York Post, Kristen Choi is an assistant professor at the School of Nursing at the University of California, Los Angeles. She signed up for the double-blind trial of the COVID-19 vaccine in August this year. Christine wrote in a paper published in JAMA Internal Medicine: “As a nurse practitioner, it feels honorable that I volunteer to participate in clinical trials, and there are 50% The opportunity to vaccinate in advance is very attractive.”

Christine believes that even though she has received professional medical training, she is still not ready to deal with the physical reaction after the two doses of the vaccine. She feels that the side effects of the vaccine are great, including fever, chills and muscle pain. Christine said that after the first shot, although there was some pain, she “not noticed any abnormalities.” However, after the second injection, serious side effects began to appear. “The injection site of the arm was very painful, much more severe than the first time. At the end of the day, I felt dizzy, cold, nauseous, and splitting headache.” , She also experienced “fever and cold”. On the night of the second injection, she went to bed early to rest. When I woke up for the first time in the middle of the night, I found that I had a low-grade fever of 37.4 degrees. When I woke up for the second time at 5:30 in the morning, I found my body temperature was 40.5 degrees.

Christine felt terrified when she realized that she had a fever. But a nurse in the research room told her: “Many volunteers will react after the second injection.” Fortunately, all the symptoms of Christine disappeared a day later, except for the lumps on the arm injection site. Christine believes that relevant researchers are obliged to inform volunteers of the side effects of the vaccine.

The latest research results show that:

According to a report by Dongfang.com on the evening of the 9th, according to Business Insider.com, the US Food and Drug Administration (FDA) announced on Tuesday the latest trials of the COVID-19 candidate vaccine, outlining the safety and side effects of the vaccine in large-scale clinical trials. .

Previously, the FDA, Pfizer and its partner German biotech BioNTech jointly conducted clinical trials on the vaccine they developed. The trial randomly selected more than 40,000 volunteers and asked them to receive two doses of Pfizer’s COVID-19 vaccine and two doses of control vaccine.

According to documents released on Tuesday, FDA scientists have not discovered any safety hazards that prevent the issuance of emergency use authorizations. According to the FDA, the safety of the vaccine is roughly similar in people of different ages, genders, ethnicities, races, and health conditions, and similar in people who have been infected with the new coronavirus.

However, it should be noted that vaccinators under the age of 55 are more likely to have side effects such as fatigue and headaches on Pfizer vaccine. These side effects usually appear within a few days after the first dose and last for one to two days on average.