New requirements on medical devices in UK, Northern Ireland and EU. The transition period after Brexit is about to end in about 20 days. From January 1, 2021, the Medicines and Healthcare Products Regulatory Agency (MHRA) will assume the responsibility of the current UK medical device market through the EU system. It will also continue to conduct market surveillance on medical devices in the UK market.

The UK will adopt UKCA certification in the future. For Northern Ireland, after the transition period, different rules will apply to the UK. As a medical device manufacturer, what do we need to do to meet the access requirements of these markets? What rules should be followed?

The current applicable regulations of UK medical devices (including IVD), UK MDR 2002, are based on the transformation of EU AIMDD 90/385/EEC, EU MDD 93/42/EEC, EU IVDD 98/79/EC. These regulations (as of January 2021 It will continue to be effective in the UK after the transition period.

Since the full implementation date of the new EU MDR and IVDR regulations is after the Brexit transition period, these two regulations will not automatically apply in the UK.

Unlike the UK, MDR and IVDR will take effect and be implemented in Northern Ireland as scheduled according to the EU implementation timetable. After the transition period, all medical devices (including IVD) need to be registered with MHRA before they can be put on the UK market.

Of course, MHRA also gave everyone a grace period to comply with the new registration process: a 4-month grace period (as of April 30, 2021):

From January 1, 2021, the UK government will establish a domestic legal framework that will enable the UK conformity assessment agency to continue to operate most products placed on the GB market.

Manufacturers outside the UK need to appoint a UK Responsible Person as soon as possible and complete the MHRA registration according to the product category within the above grace period. The responsibilities of the British generation are similar to those of the European generation.

From January 1, 2021, the name and address of the British generation (if applicable) will be required on the product label with the UKCA logo. If there is only the CE mark, there is no need for British information.
British manufacturers will need to appoint an authorized representative located in the European Union or Northern Ireland in order to place equipment on the Northern Irish market.

Manufacturers inside and outside the EU and EEA import into the Northern Irish market, but also need to appoint a British person in charge.

From January 1, 2021, manufacturers can voluntarily use the UKCA mark, but the European Union, EEA and Northern Ireland markets do not recognize UKCA. Medical devices (including IVD) that have received the CE mark can still be circulated in the UK market until June 30, 2023, including EU MDD, EU IVDD, EU AIMDD, EU MDR, and EU IVDR. If the device already has a valid CE mark, there is no need to re-apply the UKCA mark, and it can also have two marks on the label at the same time for double marking.

Starting from July 1, 2023, devices placed on the UK market will need to comply with UKCA mark requirements.

It is worth noting that the CE&UKNI mark is not recognized in the EU market, while the CE and UKCA dual marks are acceptable in the EU market. This means that products must be marketed in accordance with EU regulations and cannot be evaluated by a UK accreditation body.

The following are acceptable signs in each market: 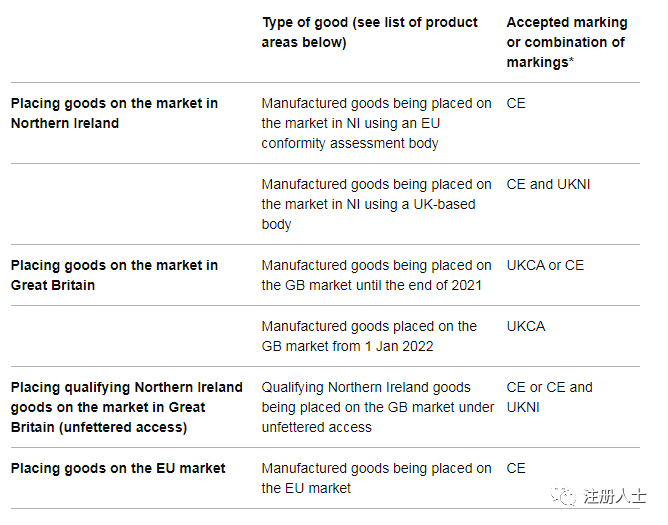 The UK Notified Bodies designated under EU MDD, IVDD, AIMDD will automatically become UK Approved Bodies, and the 4-digit agency code will remain unchanged. Continue to monitor these devices and their manufacturers to ensure continued compliance with the UKCA mark Under applicable safety and performance standards, no new specified procedures are required.

From January 1, 2021, the accreditation body in the United Kingdom will still be able to serve as a notified body for the Northern Ireland market, but it will not be able to carry out CE certification. The certificate issued by the notified body recognized by the EU will continue to be valid for the UK market until June 30, 2023.
The UK government is establishing a new UK domestic database to replace the EU NANDO database.

For high-risk devices, it is best to have a local medical agent.