Prostate cancer: Common treatment and related medical devices.  With the advancement of early screening and early diagnosis and continuous updating of treatment concepts, more early patients will be diagnosed, and the treatment of prostate cancer in the future may not be so radical.

The accumulation of excess cells in the human body often forms tissue masses, which are called “tumors.” Tumors can be benign or malignant (cancer). Prostate tumors are also divided into benign and malignant, and malignant is prostate cancer.

Nowadays, prostate cancer is the top 6 disease in the incidence of male cancer in China (the first 6 are: lung cancer, liver cancer, gastric cancer, colorectal cancer, esophageal cancer, prostate cancer). Most patients are already in the middle and advanced stages when they are discovered.

The 5-year survival rate of prostate cancer in China is only 60%, which is significantly lower than that of European and American countries (99.5%).

1. The basic principles of common treatments

Antiandrogenic treatments are all medications. Common drugs include bicalutamide, flutamide, and nilutamide. The new endocrine therapy is in the form of drugs, which can effectively inhibit the development of prostate cancer compared with traditional methods, bringing the gospel to patients with metastatic prostate cancer, such as Johnson & Johnson’s apatamide.

Open retropubic radical resection of prostate cancer (RRP) is traumatic and bleeding. The doctor makes a long incision in the lower abdomen of the patient’s belly button to remove the prostate and split the pubic bone if necessary. The rise of the concept of minimally invasive has brought a new solution to the treatment of prostate cancer-LRP. The doctor only needs to make a few small openings in the patient’s abdomen to insert surgical tools and a laparoscope with a lamp and a camera on the tip to perform the operation. However, because the prostate is deep in the pelvic cavity, and the resection operation requires fine dissection, LRP is a very difficult operation in urology. RALRP not only reduces the difficulty of the operation, shortens the operation time (about 1.5-2 hours), but also reduces the amount of bleeding, and is also more conducive to the recovery of the patient after surgery.

(Picture: Comparison of incisions between RRP surgery and RALRP surgery)

Da Vinci robots have been widely used in urology, thoracic surgery, general surgery, gynecology, heart surgery and other fields. Although the lack of tactile feedback is the biggest flaw of the Da Vinci robot, the surgeon cannot judge the elasticity of blood vessels and tissues by touch, which is extremely disadvantageous in complex operations. But leaving patients with smaller wounds and more convenient operation for doctors has allowed Da Vinci robots to continuously expand their application scenarios in the past 20 years and enjoy excellent reviews.

Radiotherapy is the use of radioactive rays to kill cancer cells. There are two forms: in vitro and in vivo. It is suitable for prostate cancer patients of various stages. The radiation of external radiation therapy (EBRT) comes from a large-scale equipment outside the body. Through computer calculation and positioning, the radiation can accurately act on cancer cells.

The mainstream radiotherapy methods widely used in clinical practice include three-dimensional conformal radiotherapy (3D-CRT) and intensity-modulated conformal radiotherapy (IMRT), both of which can act on the target area more accurately and reduce the damage to surrounding tissues. Seed implant radiotherapy involves placing radioactive particles into the prostate through a needle. Generally speaking, radiotherapy is less traumatic than RP surgery, the operation time is shorter, the postoperative impact is small, and the treatment effect is better.

High-energy focused ultrasound therapy (HIFU) uses the energy of high-energy ultrasound to precisely act on tumor tissues. It can heat up the tumor tissue (65°C) in just 1 second, causing protein denaturation of cancer cells and necrosis of cancer tissue.

HIFU therapy is widely used in the field of cancer treatment, including pancreas, liver, breast cancer, etc. It is mainly used in the treatment of recurrent prostate cancer in the field of prostate cancer treatment. The HIFU system (Haifu knife) developed by China Haifu Medical is at the leading level in the world, but because of its relatively few clinical studies, the penetration rate is low.

Cryoablation is the use of ultra-low temperature (below -160°C) to freeze and destroy cancer cells. The doctor will put a thin needle into the prostate, and low-temperature air will be transported around the cancer tissue cells through the thin needle to kill the cancer cells. There are two cryoablation methods for prostate cancer treatment: whole prostate or focal ablation. In general, cryotherapy is suitable for cases where cancer cells have not spread to the outside of the prostate, and the risk of spreading is low, and whether to use total prostate treatment depends on the size of the cancer tissue. 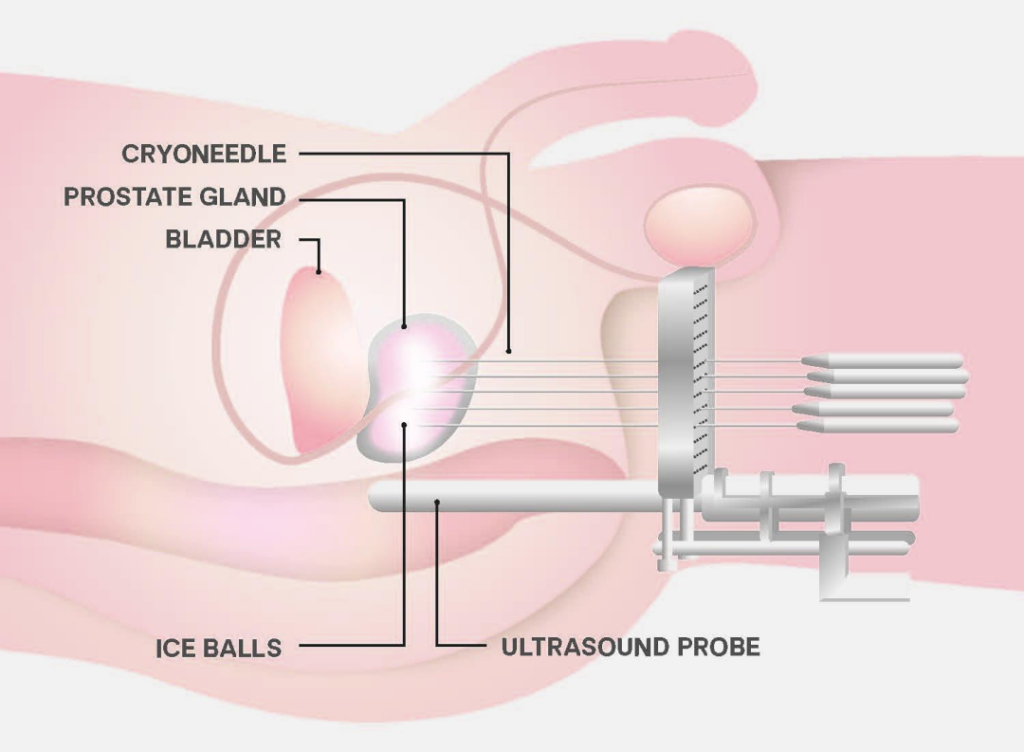 In addition, the Cryo-HIT argon-helium knife from Galileo is also a widely used cryoablation surgical system. In 2002, the Chinese Academy of Sciences also developed an instrument for cryoablation, called a cold and hot knife. Low temperature liquid nitrogen and high temperature distilled water can work alternately, and the working temperature range is much larger than that of argon helium knife. In 2017, China’s Hygeia Medical launched an ultra-low temperature cryoablation surgical system that can introduce nano-functional solutions to target tissues to enhance the therapeutic effect.

2. Application scenarios of each treatment method

According to the recommendations of the guidelines, the conclusion that can be drawn is: Although surgical castration can fundamentally solve the problem of androgen secretion, it is no longer a recommended treatment because it has a great impact on the life and psychology of patients. Only a small number of advanced elderly patients may adopt this approach.

The most mainstream methods are radical prostatectomy (RP), radiotherapy and medical castration (ADT), thanks to the mature technology, excellent clinical data and patient friendliness.

Although cryoablation and high-energy focused ultrasound technology can bring faster, more accurate, and less harmful treatments, they are used in more demanding scenarios and lack more rigorous and precise clinical studies in China than RP. Therefore, it is not as popular as RP surgery. For advanced and metastatic patients, more clinical treatments are used.

But the overtreatment of prostate cancer has also caused concern worldwide. The literature on the 20-year follow-up of patients with early prostate cancer published in the New England Journal shows that there is no significant difference in mortality between patients undergoing surgery and follow-up only; and surgery patients have more postoperative troubles (Follow-up of Prostatectomy) versus Observation for Early Prostate Cancer). More and more related researches have also caused a reflection on the treatment of prostate cancer in the academic circles. 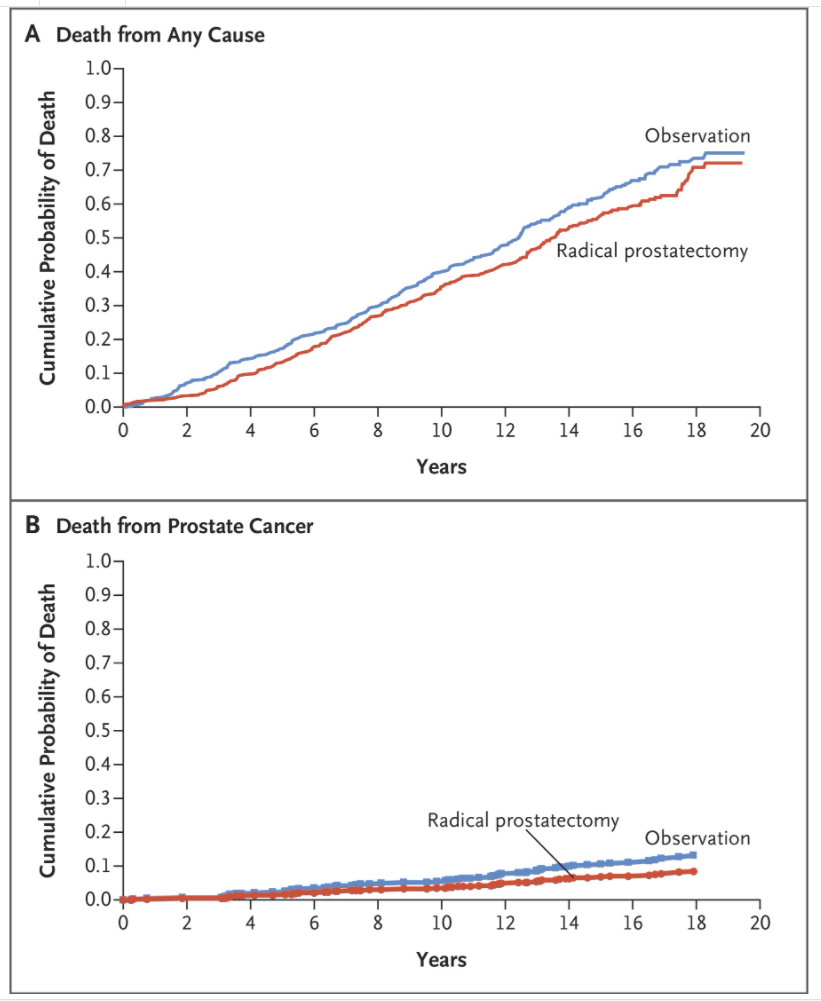 (Picture: Comparison of mortality of patients with early prostate cancer undergoing surgical treatment and follow-up only)