Pfizer mRNA COVID-19 Vaccine Will Trigger Rare Severe Allergic Reaction. In the past two weeks, at least 8 people have experienced severe allergic reactions after being vaccinated with Pfizer-BioNTech’s COVID-19 vaccine.

Recently, good news about coronavirus vaccines has continued. Moderna, Pfizer and BioNTech have all announced that their mRNA vaccines have achieved 95% efficacy in clinical trials involving thousands of people.

The US Food and Drug Administration (FDA) has also approved the emergency use of these two mRNA vaccines.

However, with the large-scale start of vaccination, the fastest approved vaccine in the world began to have serious side effects that could not be ignored.

In the past 2 weeks, at least eight people have experienced severe allergic reactions after receiving the mRNA COVID-19 vaccine produced by Pfizer and BioNTech.

In the last month, Pfizer’s stock price has also fluctuated.

Both of these two mRNA vaccines contain a small piece of messenger RNA (mRNA), which is used to guide the synthesis of the spike protein (S protein) of the coronavirus and is delivered through tiny liposomes composed of lipid nanoparticles (LNP).

It is composed of cationic lipids, auxiliary lipids, cholesterol and polyethylene glycol (PEG) to form stable nanoparticles. LNP is not only used to carry mRNA, but also It protects mRNA from being degraded too quickly.

At the same time, the lipophilicity of LNP can fuse the nanoparticle with the receptor cell membrane and deliver mRNA into the cell. 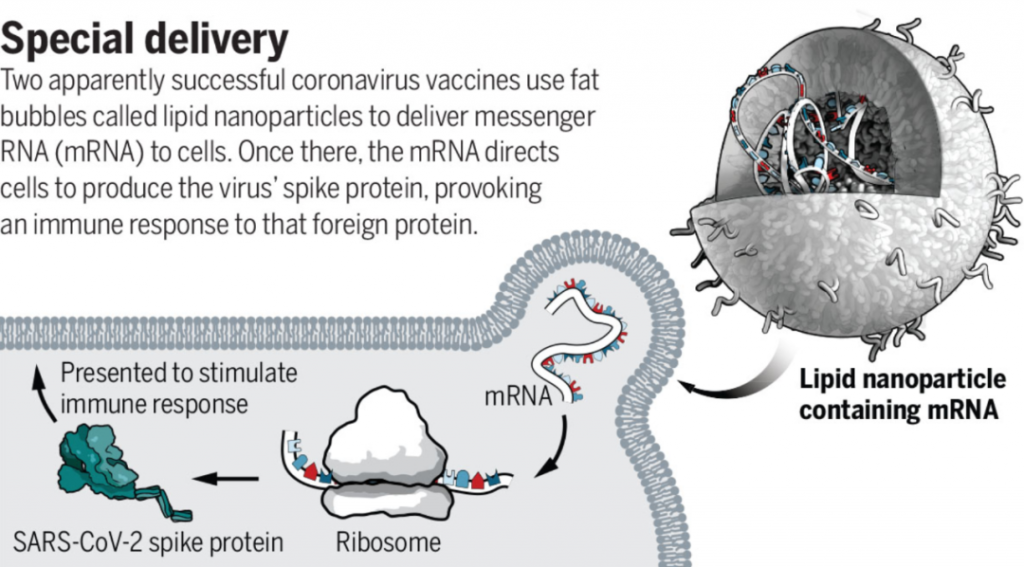 Is polyethylene glycol the culprit of allergies?

It can cause skin rashes, sudden drops in blood pressure, and shortness of breath. Symptoms such as rapid heartbeat are a potentially life-threatening reaction.

According to the latest statistics from the Centers for Disease Control and Prevention (CDC) of the United States (as of December 19), there are currently 27,2001 people receiving Pfizer’s mRNA vaccine, of which 6 have severe allergic reactions.

In addition, 2 cases have occurred in the UK. In other words, in only the last two weeks, at least 8 people have developed severe allergic reactions after receiving Pfizer’s mRNA vaccine.

Any vaccine may have side effects such as allergic reactions, but it is usually extremely rare, about once per million doses.

From the current situation, the proportion of severe allergic reactions in Pfizer’s mRNA vaccine far exceeds this rate.

At present, news reports about vaccine allergic reactions have caused anxiety among the American people.

Many Americans are deeply concerned that they may not be able to receive the COVID-19 vaccine (at least these two mRNA vaccines) due to severe allergic reactions.

Due to these allergic reactions that have already occurred, the National Institute of Allergy and Infectious Diseases (NIAID) is very concerned and has held several meetings recently to discuss these allergies with representatives of Pfizer and Moderna, independent scientists and physicians, and FDA experts. reaction.

Pfizer said it is currently “actively seeking follow-up actions” and recommended that “appropriate medical treatment and supervision should be provided immediately in the event of a vaccine allergic reaction.”

Many scientists believe that polyethylene glycol (PEG) is the main culprit for allergic reactions in mRNA vaccines, but if we want to work hard to contain the current COVID-19 pandemic, we must still rely on vaccines, and humans also need to be vaccinated.

Polyethylene glycol (PEG) can be used as a thickener, solvent, softener, etc. in many daily products, such as toothpaste and shampoo, and has been used as a laxative for decades. More and more biopharmaceuticals also contain polyethylene glycol.

People have long believed that polyethylene glycol (PEG) is biologically inert, but more and more evidence shows that they are not.

But in fact, researchers from Moderna and BioNTech, which developed mRNA vaccines, have said that polyethylene glycol (PEG) has substantial shortcomings in terms of activity and safety.

Katalin Karikó, senior vice president of BioNTech, is one of the inventors of mRNA technology. She believes that due to the low dose of vaccine injection and intramuscular administration, this so-called risk is negligible.

Katalin Karikó emphasized that according to current understanding, the risk of mRNA vaccines is still very low. All vaccines have certain risks. But the benefits of vaccines far outweigh the risks.

How should we respond?

Both mRNA vaccines require two injections. Anti-polyethylene glycol (PEG) antibodies triggered by the first injection may increase the risk of allergic reactions during the second injection.

What if polyethylene glycol (PEG) is indeed the culprit?

It is obviously unrealistic to screen tens of millions of people for antibodies against polyethylene glycol (PEG) before vaccination.

The US Centers for Disease Control and Prevention (CDC) guidelines recommend that Pfizer or Moderna’s mRNA vaccine should not be administered to people who have a severe allergic reaction to any component of the vaccine.

For people who have had a severe reaction to other vaccines, the risks and benefits of vaccination should be carefully weighed.

According to statistics, after vaccinating with Pfizer and Moderna’s mRNA vaccine, 2% of vaccinators will have a severe fever of 39°C to 40°C.

Although the ratio of 2% is not high, if the two COVID-19 vaccines are approved by the regulatory authorities, their goal is to provide 35 million people worldwide with vaccination by the end of December, and 2% of them will have a severe fever, which will be 70%. Million people.

In addition to fever, other short-lived side effects may affect more people. The independent committee that conducted an interim analysis of Moderna’s large clinical trial found that serious side effects included fatigue (9.7%), muscle pain (8.9%), arthralgia (5.2%) and headache (4.5%).

In the Pfizer/BioNTech vaccine clinical trial, the proportion of side effects was even lower. Side effects included fatigue (3.8%) and headache (2%).

The proportion of these side effects is obviously much higher than that of most influenza vaccines, and it is beyond the scope of people’s habits.