Exploration of potential microbial markers of lung cancer. The biological disorders of the lung microbiota may be related to the development of lung diseases.

1). Diversity index: refers to the determination of species diversity.

The data measured by the environment of each spatial scale is different.

α Diversity: The main concern is the number of species in a local uniform habitat, so it is also called within-habitatdiversity.

① It can indicate the degree of isolation of the habitat by species;

②The measured value of β diversity can be used to compare the habitat diversity of different areas;

③ β diversity and α diversity together constitute the overall diversity or the biological heterogeneity of a certain area.

The study of microbial diversity in community ecology, β diversity is a comparative analysis of the microbial community composition of different samples/different groups of samples.

In the study of microbial diversity in community ecology, γ diversity analysis refers to the combination of α diversity and β diversity.

Calculate the index of community richness

Chao index. The larger the chao index, the more species in the sample.

Shannon index, the larger the Shannon value, the higher the community diversity.

Principal coordinate analysis is a visualization method to study the similarity or difference of data. After sorting through a series of eigenvalues ​​and eigenvectors, select the eigenvalues ​​that are mainly in the top. PCoA can find the most important in the distance matrix The result is a rotation of the data matrix. It does not change the mutual positional relationship between the sample points, but only changes the coordinate system. PCoA can observe the differences between individuals or groups.

The Gini coefficient is an internationally used indicator to measure the income gap of residents in a country or region. Therefore, use in the model is an index to evaluate the distinguishing ability of the model.

Random forest is a commonly used method in machine learning. Random forest, as its name implies, is to build a forest in a random way. There are many decision trees in the forest, and there is no correlation between each decision tree in the random forest. After getting the forest, when a new input sample enters, let each decision tree in the forest make a judgment separately to see which category the sample belongs to (for the classification algorithm), and then see which If one category is selected the most, then predict that sample belongs to that category.

In the past, people usually thought of the lung as a sterile environment. However, high-throughput sequencing technology found that there are many bacterial communities in the lungs, including Proteobacteria, Firmicutes and Bacteroides. There is increasing evidence that there is a link between changes in the lung microbiota and lung diseases such as asthma, chronic obstructive pulmonary disease, idiopathic pulmonary fibrosis (IPF), cystic fibrosis and lung cancer.

Some specific microorganisms are known to be related to cancer. For example, Helicobacter pylori is associated with a high risk of gastric cancer; the number of Fusobacterium nuclei is associated with the prognosis of patients with colorectal cancer. The link between the microbiome and lung cancer remains relatively unclear. Although some previous studies have noted that changes in specific microbiota in bronchoalveolar lavage fluid, lung tissue, sputum, saliva, and stool samples may be related to lung cancer, these studies have produced conflicting results. In addition, studies have found that Lactobacillus shows an effect in the treatment of lung cancer in mice, which means that regulating microorganisms may affect the treatment of lung cancer. Therefore, the article further explores the relationship between the microbiota and lung cancer, and explores the underlying mechanism of its interaction.

A previous study showed that the individual microbiota can remain stable for a long time, which highlights the potential of the microbiota as a diagnostic method and therapeutic target. Because saliva and sputum samples are easily disturbed by the oral microbiota, and it is often difficult to obtain lung tissue samples from patients with advanced lung cancer, some experts believe that BALF is a viable method for sampling the lung microbiota because the BALF microbiota Will not be disturbed by oral contamination. In order to validate previous studies and provide a more specific understanding of how lung microbiota affects lung cancer patients and individuals with benign lung diseases, this study aims to further apply 16S rRNA-based next-generation sequencing to study the lung microbiota in BALF samples Differences in classification and derived functional characteristics.

1. The study recruited 54 patients, of which 32 patients were pathologically diagnosed with lung cancer, and 22 patients were diagnosed with benign lung disease as the control group. The demographic and clinical data of all participants were recorded, including age, gender, body mass index (BMI), smoking history, smoking index, tumor markers, pathological type, and tumor stage.

4. The calculation method of α diversity is to use ASVs, Chao1, Shannon index to measure. Beta diversity is measured on sparse data using Bray-Curtis metric, unweighted uniformity, and weighted uniformity. Nonparametric multivariate analysis of variance was used to assess the diversity differences between groups. Based on Bray-Curtis metric, unweighted uniform distribution and weighted uniform distribution, the principal coordinate analysis is performed. The KO abundance was predicted based on the ASVs data, and the KEGG pathway of differential enrichment was estimated based on the LDA score of LEfSe. The random forest model is used to estimate the importance of each different genera, and the ability to predict lung cancer is evaluated according to the AUC value in the ROC characteristic curve. 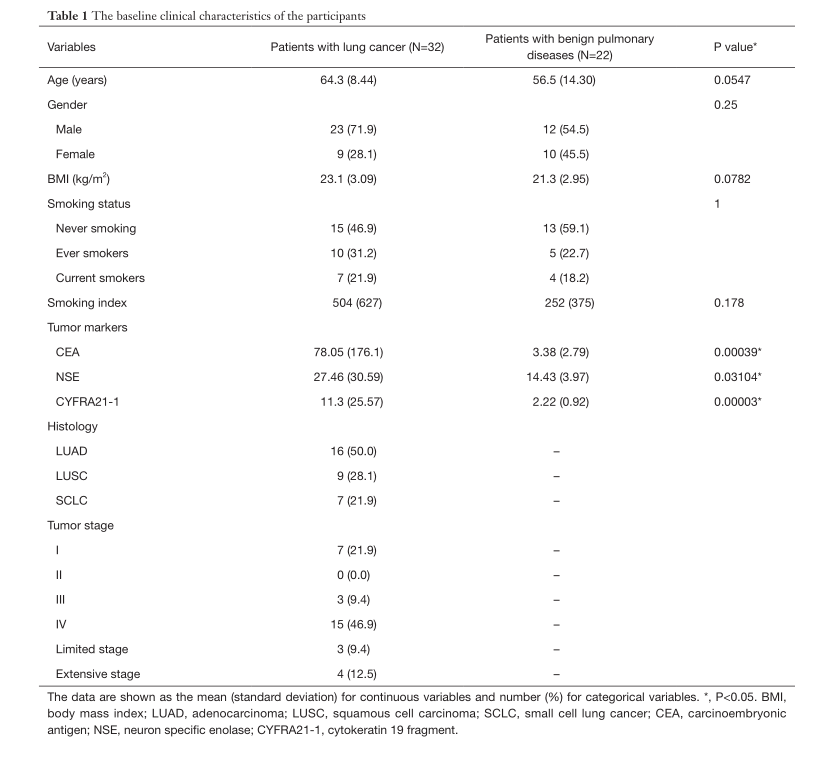 Alpha and beta diversity between lung cancer and control group 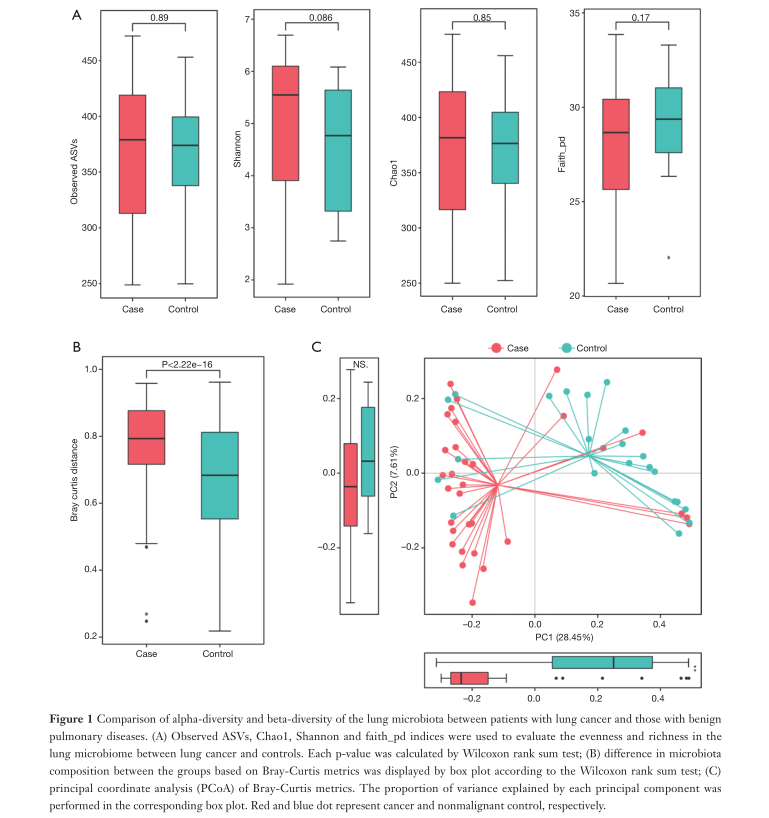 B. According to Wilcoxon rank sum test, Bray-Curtis is used to measure the difference in microbial community composition between groups (β diversity). It was found that: P<0.05, so there was a significant difference in β diversity between the two groups.

C. According to the Bray-Curtis metric, the principal coordinate analysis is carried out. The long straight line distance between the two groups of samples indicates that there is a greater difference in flora between patients with lung cancer and patients with benign lung diseases. 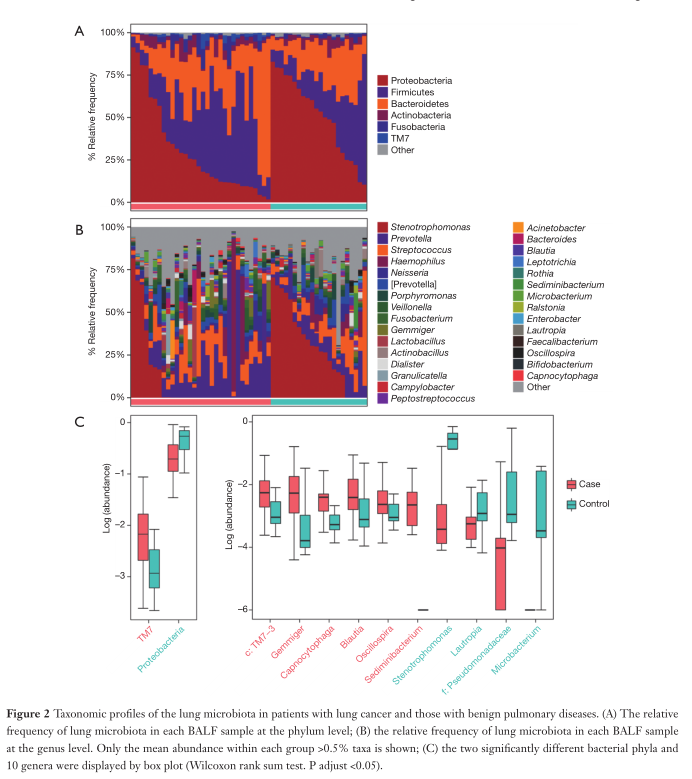 Fig2. Explored the differences in the classification of lung microbiota between patients with lung cancer and patients with benign lung diseases. According to the relative abundance of the microbial communities in the two groups of BALF samples, classification and analysis were carried out at the phylum and genus level.

A. Shows the relative abundance of the lung microbiota at the phylum level in each BALF sample. It can be found that: Proteobacteria, Firmicutes and Bacteroides are the most common in the cancer group and the control group. Moreover, the average abundance of Actinomycetes, Fusobacterium and TM7 in the two groups were all greater than 0.5%.

B. Shows the relative abundance of the microbial communities in each BALF sample at the genus level. It can be found that phagomonas, Prevotella, Streptococcus, Haemophilus and Neisseria are the most common in the cancer group and the control group.

Predict the function of the lung microbiota 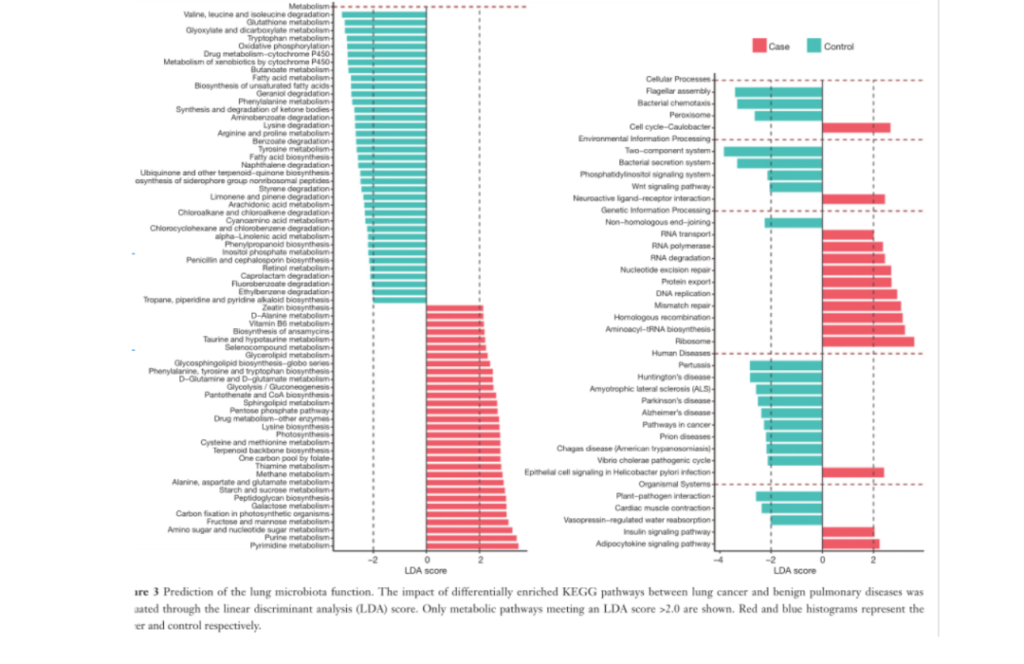 Fig3. The function of lung microbiota is predicted. The linear discriminant analysis (LDA) score was used to evaluate the impact of the differentially enriched KEGG pathway between lung cancer and benign lung diseases. Only the metabolic pathways that meet the LDA score> 2.0 are shown.

It can be found from the figure that there are 46 and 57 different ways in the lung cancer group and the control group, respectively. The microbiota in the BALF samples of lung cancer patients has obvious metabolic behaviors of ribosomal metabolism, pyrimidine metabolism and purine metabolism. In samples from patients with benign lung diseases, the two-component system, flagellar assembly, and bacterial secretion system were significantly excessive. 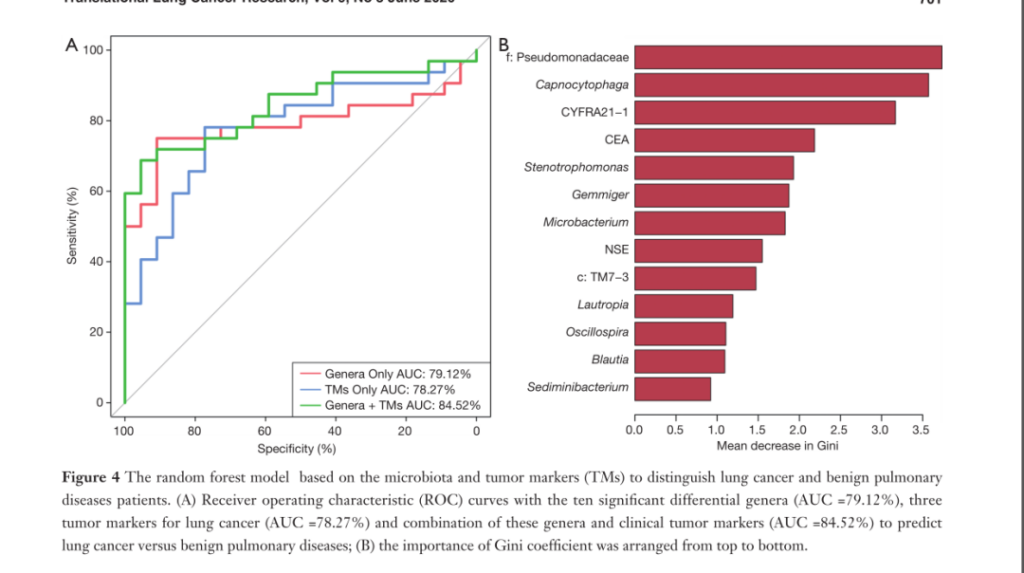 Panel B: shows the Gini coefficient of each marker. It can be seen from the figure that compared with clinical tumor markers, the Gini coefficients of Pseudomonas and Cystocytosis are higher, and the distinguishing ability is relatively satisfactory.

Next, the author also analyzed the correlation between microbial markers (cystophilic bacteria, sedimentary bacteria and c:TM7-3) and tumor markers (CEA and CYFRA21-1). The analysis found that the two were positively correlated and Significant correlation.

1. There is a big difference in flora between patients with lung cancer and patients with benign lung diseases, and a differentiation trend is observed in the overall structure of the microbial community.

2. There is no significant difference in the abundance and diversity of microbial communities in samples from lung cancer patients and non-malignant lung disease patients.

3. In the samples of lung cancer patients, the relative abundance of TM7 and c:TM7-3 was significantly increased.

4. The metabolic pathways of ribosome and pyrimidine in lung cancer patients are significantly rich.

5. The combination of bacteria and clinical tumor markers can better predict lung cancer.

1. The number of patients registered in this study is not large enough, and lung cancer patients are not classified according to histological subtypes or different stages, and there may be heterogeneity.

2. In the absence of a validation cohort, using specific bacteria to distinguish between lung cancer and benign lung disease may lead to false positive values ​​and unreliability.

3. This study is a cross-sectional study, and the mechanism of interaction between the microbiomes has not been further explored.