South Africa 501-V2 mutant has increased viral load and 50% higher infectivity. Recently, the emergence of variants of the new coronavirus has caused serious concern around the world. It has been reported that the frequency of this mutation has increased so rapidly in southeast England that it is suspected that it has increased the transmission capacity.

On January 15, 2021, a new preprint research paper published on the medRxiv platform involves preliminary research on the so-called British variant UI-202012/01 (B.1.1.7 or 20B/501Y.V1), The study revealed that the number of unique map reads in the Y501 variant was more significant than that in the N501 variant, and the average viral load of the Y501 variant was increased by approximately three times.

This variant was first recorded in December 2020 and is defined by the N501Y mutation in the ear protein receptor binding domain (RBD), the deletion of ΔH69/V70, and many other mutations.

The researchers used quantitative sequencing methods to sequence all positive samples from four Lighthouse laboratories in the UK. This will generate the number of unique mapping reads, which are related to the viral load and therefore act as a proxy for the viral load.

The study found that the logarithm of the unique mapping reading was negatively correlated with the Ct value detected by the polymerase chain reaction (PCR). The researchers chose the presence of Y501 as a marker for the new variant. From the 88 samples showing this mutation, only samples collected from October 31 to November 13, 2020 were considered.

The reason for the rapid growth associated with this mutation is unclear, but it may be due to faster epidemic growth, demographic patterns, founder effects or higher viral loads, and other biological mechanisms.

In this case, the correlation with the higher viral load seems to indicate that the virus’s ability to spread is enhanced, but further research is needed.

More than 1.3 million people have been infected in South Africa, with more case records than any other country on the African continent, and more deaths, 37,105.

On January 19, 2021, experts said that a new variant of coronavirus 510Y.V2 first discovered in South Africa is more infectious than the earlier virus, but there is no evidence that it is more deadly.

Virologist Professor Alex Siegel said that the world has underestimated this virus, which is evolving and adapting to humans.

Epidemiologist Abdool Karim said that it is not yet known whether the current vaccine will be effective against this new virus variant, but several studies are ongoing. 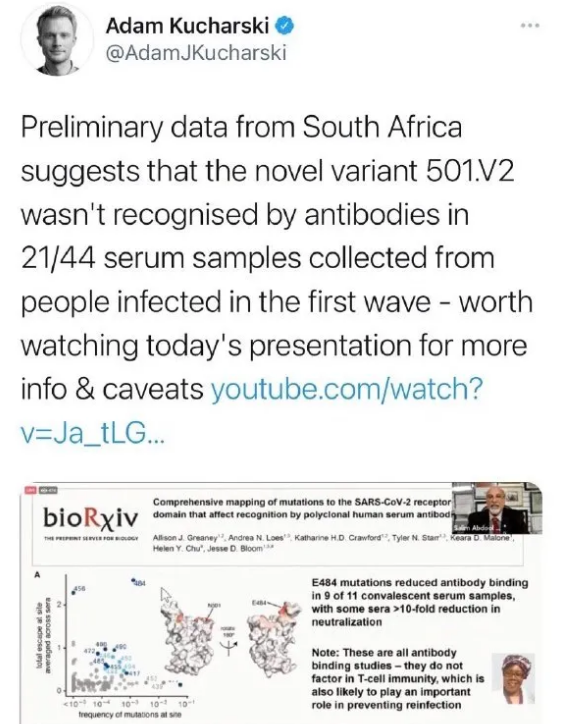 The results of the study from the National Institute of Infectious Diseases (NICD) of South Africa are even more worrying. The study found that the serum (48%) of 21 of the 44 recovered patients from COVID-19 completely lost the ability to bind to the 501.V2 mutant. , That is, the virus epitope has completely escaped.

Therefore, 501.V2 may have a relatively complete antigenic drift, which has brought greater challenges to the global fight against the epidemic.