Data from the South African Ministry of Health on the 7th showed that there were 2,435 new confirmed cases of COVID-19 in South Africa in a single day and 110 new deaths. As of that day, South Africa had confirmed more than 1.47 million COVID-19 cases, of which 46,290 people died. 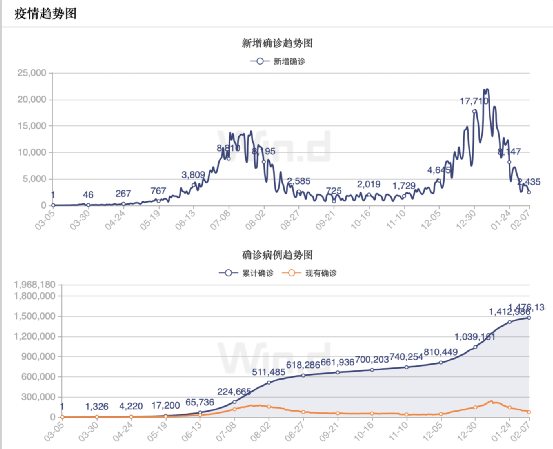 If South Africa wants to save more lives, vaccinating the people has become the most important task. However, according to CNN, South Africa’s Health Minister Zweli Mukez said on the 7th that it would suspend the promotion of the COVID-19 vaccine developed by the British drugmaker AstraZeneca in cooperation with Oxford University.

Mukez said at a video press conference on the 7th that the mutant new coronavirus (known as the B.1.351 virus) found in South Africa seems to be more contagious. 90% of the new cases in South Africa are infected with this strain, and Aspen The Likang vaccine “seems to be ineffective against this mutant virus.”

Mukez said that the South African government has therefore decided to suspend the start of AstraZeneca vaccination, but will use other COVID-19 vaccines later this month to vaccinate medical workers. The government expects “to receive the Johnson & Johnson vaccine within 4 weeks from next week. , Pfizer vaccine”.

However, preliminary research data shows that Johnson & Johnson vaccine and Pfizer vaccine have poor defense effects against B.1.351 virus.

Previous data from Bloomberg showed that it will take 7.4 years (that is, by 2028) if the world is to return to the state of life before the epidemic. According to the Xinhua News Agency, the Oxford University website in the United Kingdom released the preliminary results of a study on the 7th, saying that the COVID-19 vaccine developed by the school and AstraZeneca Pharmaceuticals has been reported to South Africa for mild to moderate infections caused by the mutant COVID-19 virus. It can only play a “minimal” preventive effect.

The researchers recruited about 2,000 volunteers with an average age of 31 years. A mild infection was defined as the appearance of at least one symptom of a COVID-19 infection. Preliminary test results show that the mutations observed in the B.1.351 mutant new coronavirus can allow the virus to continue to spread among vaccinated people, with limited protection. However, since the average age of the target population selected for this study is relatively young, the risk of severe illness, hospitalization or even death after being infected with the current mutant virus is relatively low. Therefore, the research team failed to evaluate Aspen for severe infections. The effectiveness of Likang vaccine.

According to Shabir Madi, a professor of vaccinology at Golden Mountain University in South Africa, said at an online press conference held by the South African Ministry of Health on the 7th, this mutant COVID-19 virus is currently spreading in South Africa. Some volunteers who received two doses of AstraZeneca vaccine still showed mild to moderate symptoms of infection. The effectiveness of this vaccine in clinical trials before October last year was very high. Even if only one dose was given, the protection rate could reach 75%, but with the spread of the mutant virus, the effectiveness of the vaccine weakened.

According to the official website of Oxford University, the peer review process for this preliminary research result has not yet been completed.

According to Observer.com, citing foreign media reports, the current AstraZeneca vaccine research results are a huge blow to South Africa’s fight against the epidemic. The 1 million doses of vaccine that the country received just a week ago have entered the warehouse.

Both Pfizer and Moderna said that preliminary laboratory studies have shown that their vaccine still has a protective effect, but the defense effect against the B.1.351 virus is poor. Johnson & Johnson Vaccine also sequenced the test samples of its South African clinical trial participants, and the results showed that the vaccine is less effective in South Africa than in the United States.

Experts in South Africa also said on the 7th that they found that those who had been infected with the new coronavirus early and produced antibodies could not resist this new strain. Mukez said that 90% of the country’s cases are caused by this virus. This mutant virus seems to be more infectious and is causing the resurgence of new coronavirus pneumonia in the country.

Currently, the B.1.351 virus has spread to at least 32 countries. The UK is conducting door-to-door virus testing in eight areas of the country where the virus may spread, in order to eliminate the mutant virus before it spreads widely and prevent the virus from disrupting the country’s vaccination program. According to Xinhua News Agency, an AstraZeneca spokesperson said that Oxford University and AstraZeneca have begun to improve the COVID-19 vaccine, and are expected to develop a new version of the vaccine that can prevent the mutant virus found in South Africa in the fall.

The world is expected to return to its pre-epidemic state in 7.4 years

According to Longfang News, according to Fauci and others, the chief infectious disease expert in the United States, if life is to return to normal, vaccination must cover 70% to 85% of the population. Bloomberg’s vaccine tracking project data shows that with a 75% coverage target of two doses of vaccine, it will take 7.4 years for the world to return to normal before the epidemic.

According to the Health Times, Li Tong, Department of Infectious Diseases, Beijing You’an Hospital, once stated, “Previous vaccines are all emergency vaccination, and are affected by vaccine production capacity, and the vaccination speed is relatively slow. Once the safety and effectiveness of the vaccine are proven, the vaccine production capacity will accelerate. The expansion will increase the speed of vaccination.” Li Tong once mentioned that I believe that global epidemic control will be achieved ahead of schedule. Since the beginning of the epidemic, many institutions have developed predictive models, and many of the models’ predictions are relatively accurate. But the longer the interval, the more factors are affected, and the accuracy will decrease. The current forecast is based on existing data plus some conjectures. If there are changes in the future, the model can be adjusted.

WHO Director-General Tedros Adhanom Ghebreyesus pointed out at the WHO routine press conference on new coronavirus pneumonia on February 5, local time, that more than three-quarters of COVID-19 vaccination occurred in only 10 countries, and these countries accounted for almost global GDP. 60% of the population, and 2.5 billion people in nearly 130 countries have not yet received the COVID-19 vaccine.

Li Tong once said that if the vaccination rate does not reach the coverage, we cannot easily relax our vigilance, and economic and social development will be restricted. Therefore, we still encourage and call on everyone to get the COVID-19 vaccine.