Itching is a common side effect of opioids used in clinical treatment of pain. In this study, the authors demonstrated that intrathecal injection of the μ-opioid drugs morphine and DAMGO (a MOR selective agonist) can cause pruritus, which is mainly caused by spinal GABA inhibitory interneurons. MOR-mediated.

1. Intrathecal opioids induce acute itching through MOR on the surface of inhibitory interneurons. 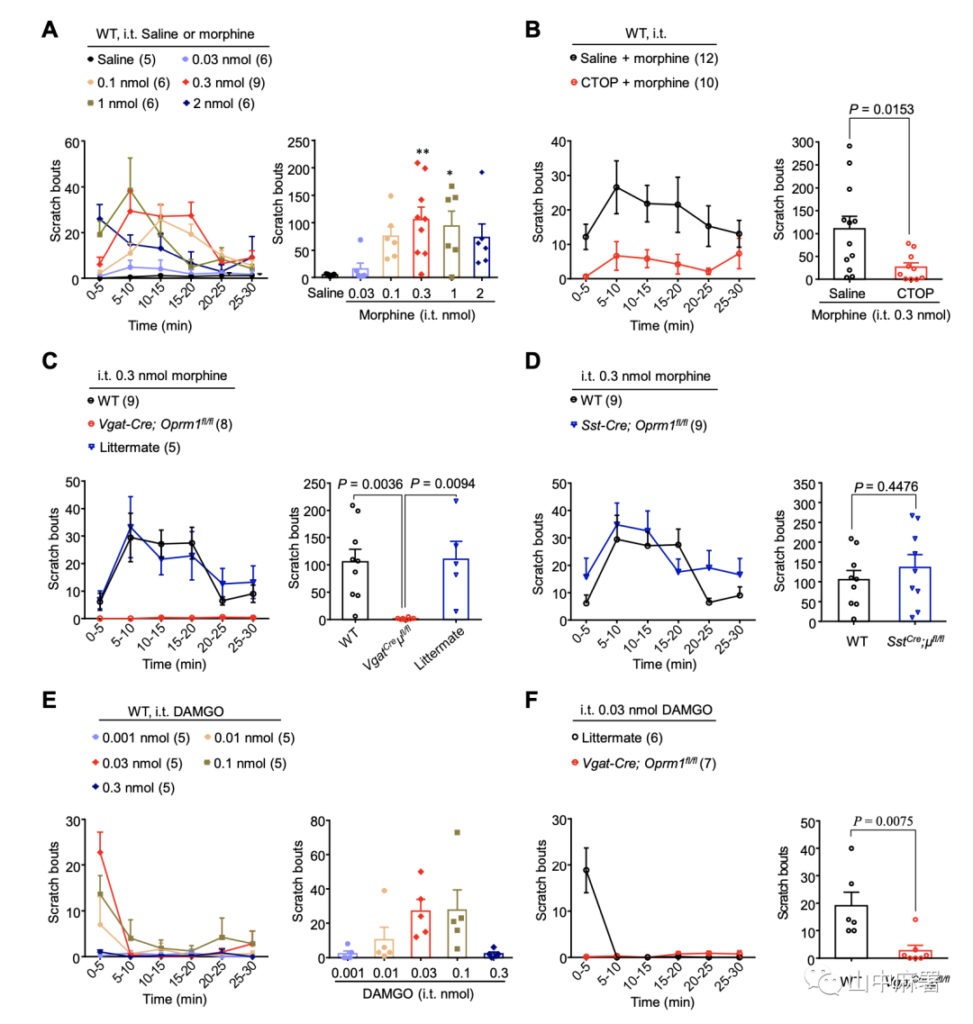 2. The respective roles of peripheral and central MOR in the process of morphine-induced pruritus

The researchers used an opioid receptor antagonist that does not pass through the blood-brain barrier: thiourea naloxone. Pre-injection of thiourea naloxone through the intraperitoneal cavity only blocked the MOR activity of peripheral sensory neurons and did not change the morphine induction Itching (Figure 2A, P = 0.1873). In contrast, intrathecal thiourea naloxone completely eliminated morphine-induced pruritus, indicating that MOR signals in the spinal cord mediate morphine-induced pruritus (Figure 2B, P = 0.0004). Furthermore, in mice with MOR knockout on TRPV1+ sensory neurons and mice pretreated with resininferatoxin (RTX, ablation of TRPV1+ sensory neurons), morphine-induced pruritus did not change. (Figure 2C, D, P = 0.2005, P = 0.4951). In addition, intradermal injection of morphine (100nmol) can induce a very mild itching response (an average of 14 scratches within 30 minutes), and this response was unchanged in Vgat-Cre; Oprm1fl/fl mice (Figure 2E, P = 0.3281). In summary, the pruritus induced by intrathecal injection of morphine is specifically mediated by inhibitory interneurons MOR in the spinal cord. 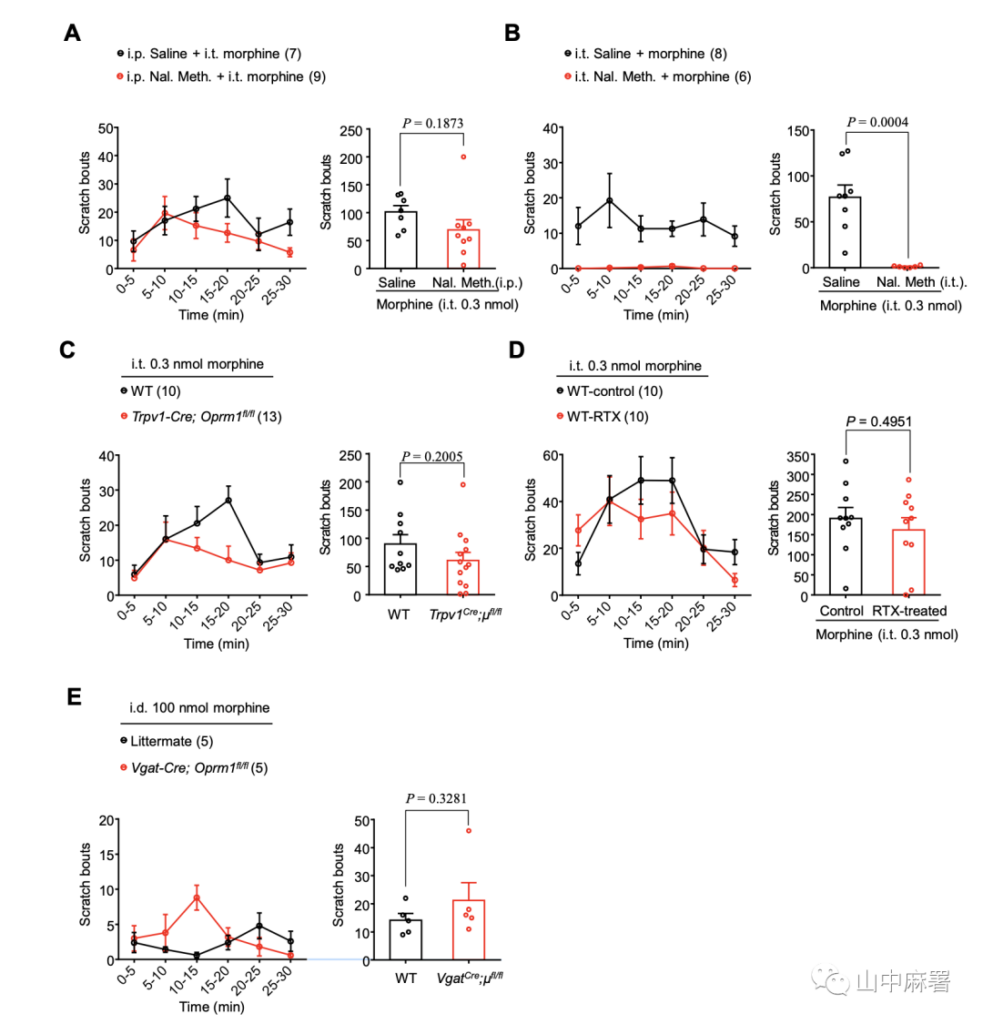 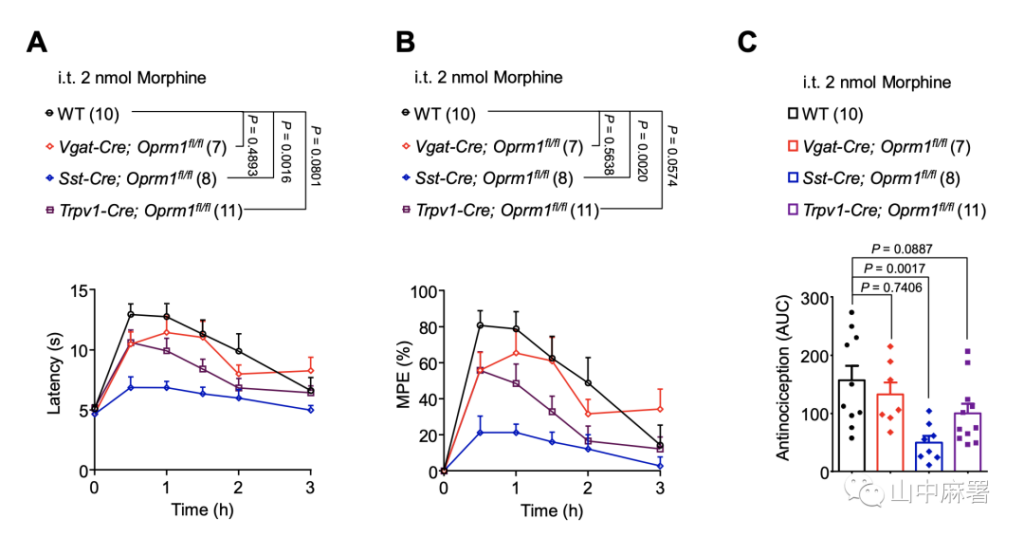 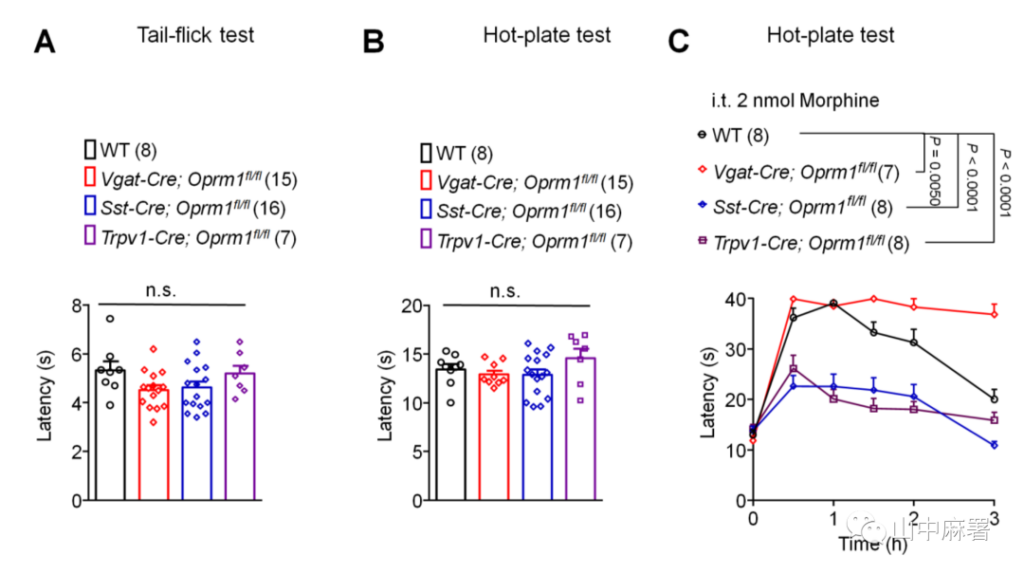 Expression of MOR in the spinal dorsal horn (SDH) 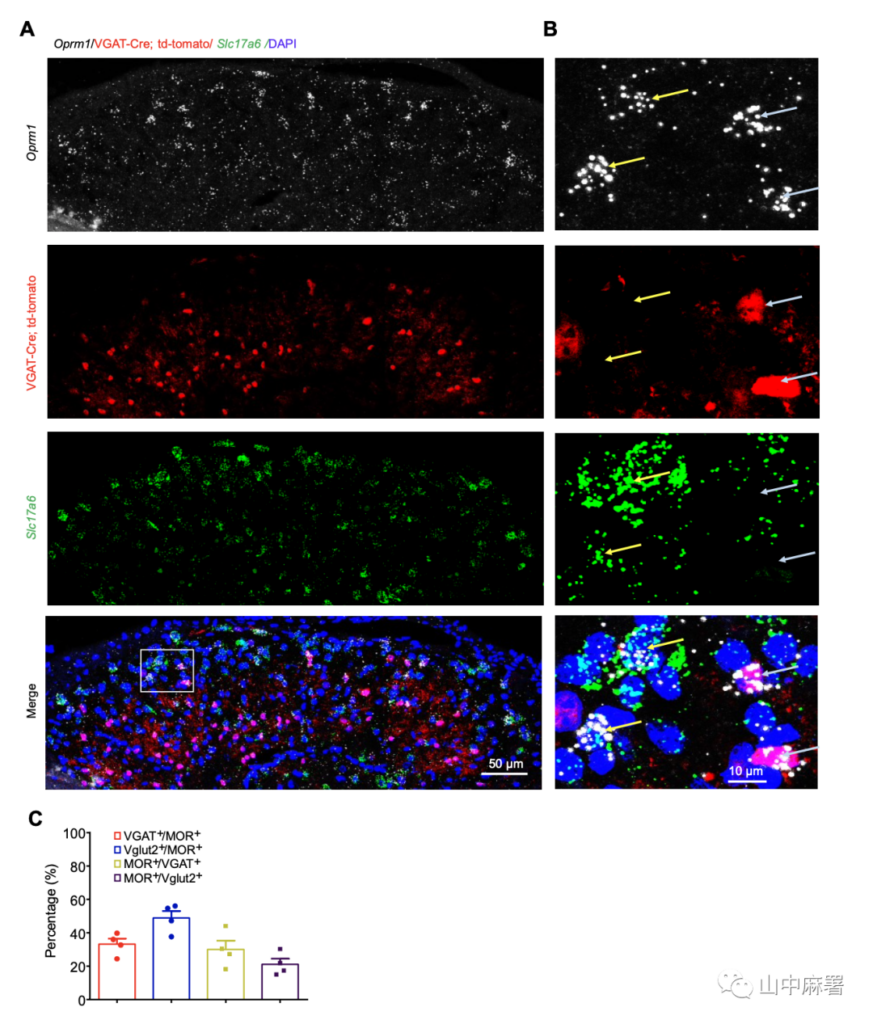 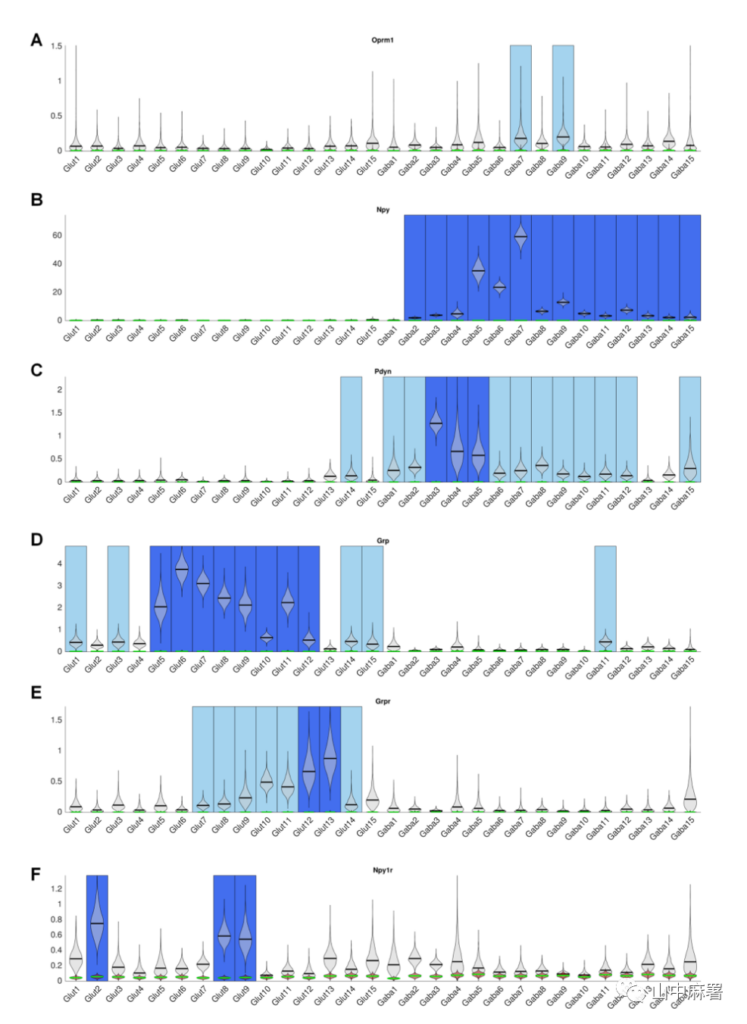 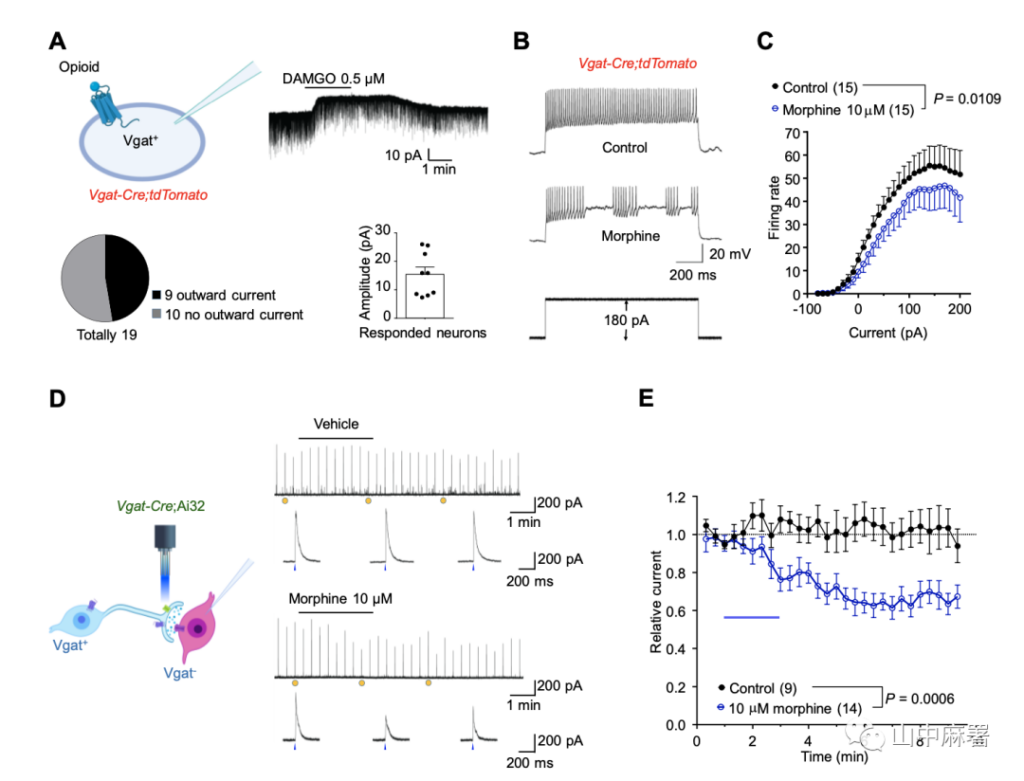 5. Intrathecal morphine-induced pruritus was suppressed by NPY, but was abolished by GRPR+interneuron ablation.

NPY-Y1 receptor is involved in the transmission of itching 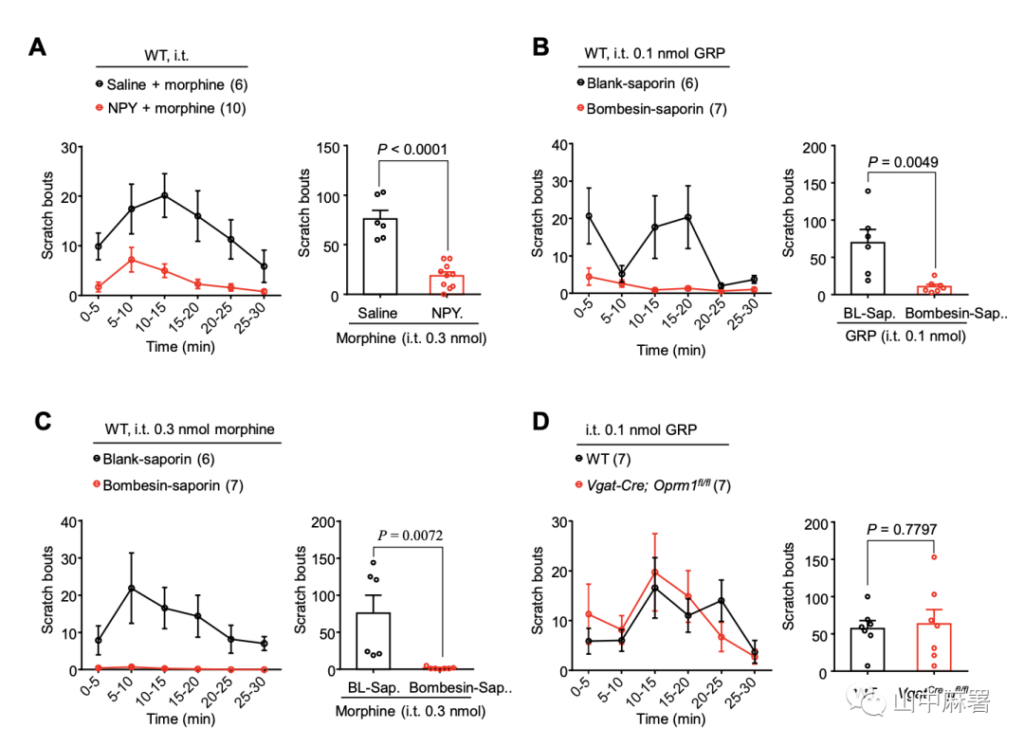 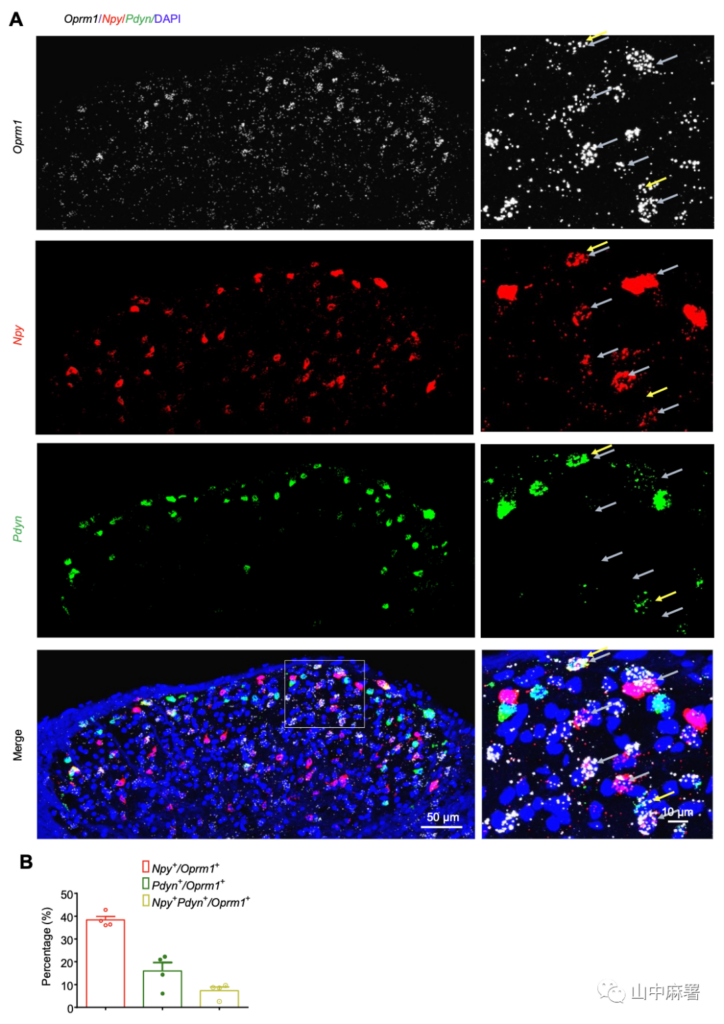 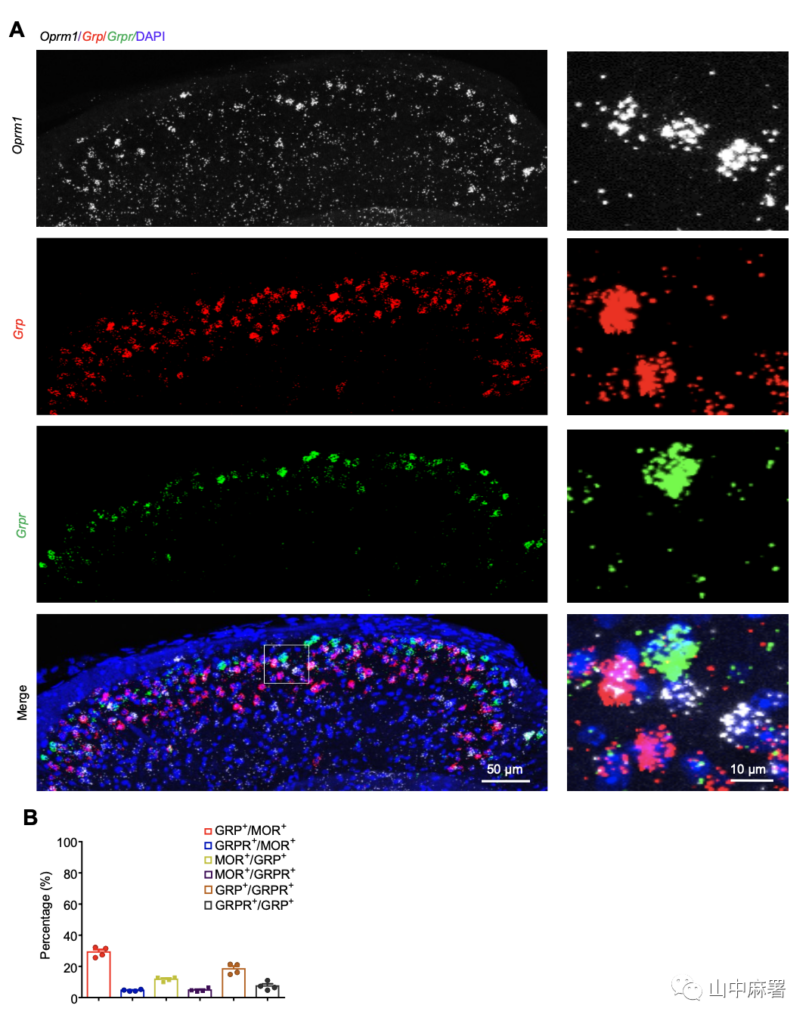 6. MOR in inhibitory interneurons contributes to the persistent itching associated with dermatitis, but does not contribute to the occurrence of acute chemical itching.

Contribution of MOR to pruritus in different animal models of pruritus

A DNFB-induced model of allergic contact dermatitis was used to determine the role of MOR in chronic pruritus. In Vgat-Cre; Oprm1fl/fl mice, DNFB-induced pruritus was significantly reduced (Figure 7A and B, P = 0.0224). In addition, the authors also tested acute itching induced by chloroquine (CQ) and histamine. Acute pruritus induced by intradermal injection of CQ and histamine did not change significantly in Vgat-Cre; Oprm1fl/fl mice (Figure 7C and D, P=0.6328, P=0.5120). These results indicate that MOR on inhibitory interneurons specifically contributes to chronic pruritus associated with dermatitis, but does not have a positive effect in acute chemical pruritus.

Intraperitoneal injection of naloxone can significantly reduce spontaneous pruritus in the DNFB model, while thiourea naloxone cannot, which suggests that MOR expressed in the central nervous system is more critically involved in chronic pruritus (Figure 8A, P = 0.0044, respectively) And P = 0.6383). In addition, intrathecal injection of naloxone significantly reduced DNFB-induced pruritus (Figure 8B, P = 0.0007). 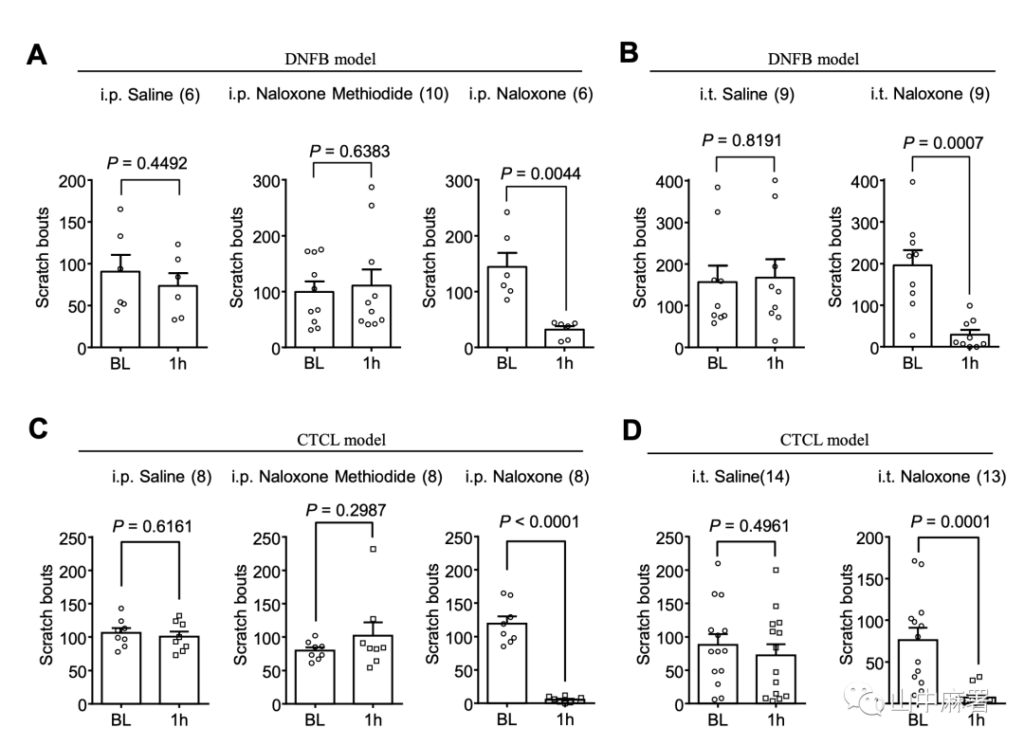 The author’s findings indicate that intrathecal opioids act on the MOR of inhibitory interneurons in the spinal cord to regulate itching by releasing inhibition.

μ-opioids can inhibit the activity of Vgat+ interneurons in the spinal cord, relieve its inhibition of the itching signal pathway, and cause itching.

After the deletion of Oprm1-Vgat, chronic pruritus in a mouse model of DNFB-induced allergic contact dermatitis was reduced.

Naloxone inhibits pruritus in both DNFB and CTCL models, while thiourea naloxone cannot, indicating the effect of central MORs on chronic pruritus.