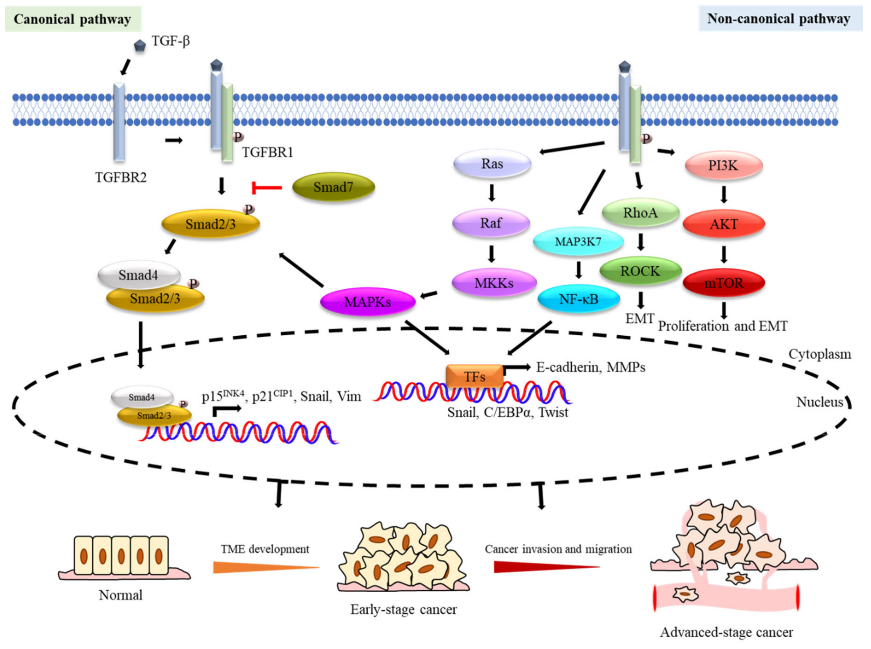 Transforming growth factor β (TGF-β) was originally discovered because it can stimulate the growth of rat fibroblast cell lines. In the past 30 years, TGF-β has been further studied, especially its dual role in the tumor microenvironment (TME), which is called the “TGF-β paradox”, which can be both good and evil. .

In early tumors, the TGF-β pathway induces cell apoptosis and inhibits tumor cell proliferation. On the contrary, in the late stage, it can promote tumors by regulating genome instability, epithelial-mesenchymal transition (EMT), neovascularization, immune evasion, cell movement and metastasis. As an immunosuppressive cytokine, TGF-β has a wide range of inhibitory effects on the immune response through different mechanisms.

At present, TGF-β targeting agents have become a new hot research direction. Understanding the mechanism of TGF-β signal transduction and the application status of TGF-β inhibitors are essential for the efficacy of tumor treatment and reducing side effects.

Since the discovery of TGF-β1, more than 30 TGF-β superfamily members have been identified and characterized, and they have common points in synthesis, signal transduction mechanisms and functions. According to the similarity of its structure and function, the TGF-β superfamily is divided into TGF-β and bone morphogenetic protein (BMP) subfamily.

There are three highly homologous TGF-β subtypes in mammals, namely TGF-β1, TGF-β2, and TGF-β3. In the TGF-β superfamily, TGF-β subtypes have been studied most extensively. According to the Cancer Genome Atlas (TCGA) data, TGF-β1 is the most commonly expressed subtype in most human cancers. In addition, compared with TGF-β2 and TGF-β3, the expression of TGF-β1 is most closely related to TGF-β signal activation. 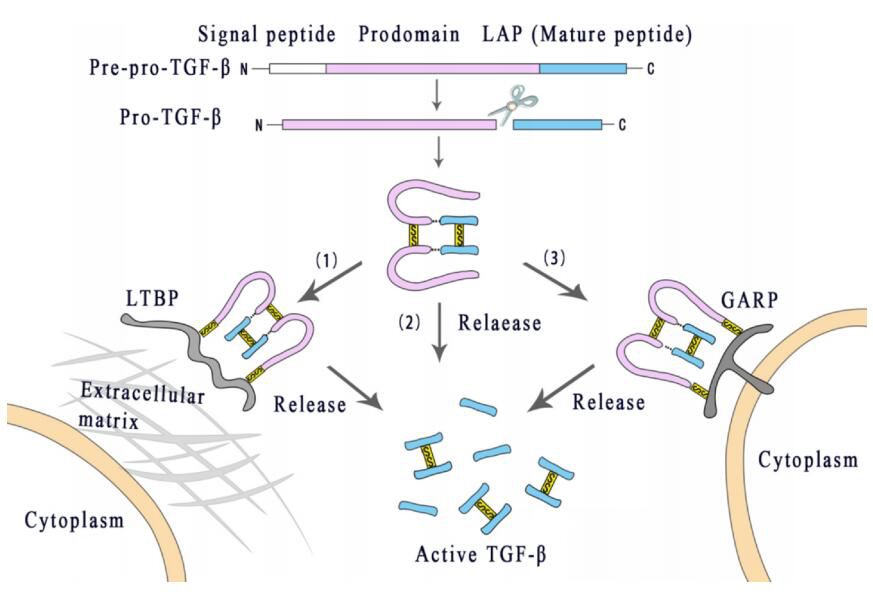 In addition, latent TGF-β can also bind to Treg or the transmembrane glycoprotein A-based repetitive sequence protein (GARP) and LRRC33 on the surface of Treg or macrophages. After the Arg-Gly-Asp (RGD) sequence on LAP interacts with integrin αvβ6 or αvβ8, TGF-β1 and TGF-β3 are allosterically released from their latent complex. Only when released from the latent complex can TGF-β become active and activate its receptor.

In addition, latent TGF-β can also bind to Treg or the transmembrane glycoprotein A-based repetitive sequence protein (GARP) and LRRC33 on the surface of Treg or macrophages. After the Arg-Gly-Asp (RGD) sequence on LAP interacts with integrin αvβ6 or αvβ8, TGF-β1 and TGF-β3 are allosterically released from their latent complex. Only when released from the latent complex can TGF-β become active and activate its receptor.

After binding to TGF-β, TGF-βRII acts as a high-affinity TGF-β receptor to recruit and phosphorylate the intracellular domain of TGF-βRI to form a heterotetramer, which then activates the SMAD protein that signals downstream. 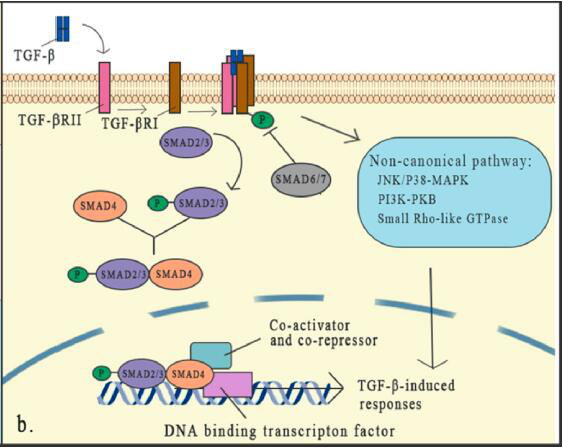 The classic pathway that SMAD relies on is the core part of TGFβ signaling. There are 8 SMAD proteins in mammals that are divided into three categories, including receptor-associated SMADs (R-SMADs), cooperative SMADs (co-SMADs) and inhibitory SMADs (I-SMADs).

TGF-β binds to the receptor to activate the receptor, which can lead to the activation of R-SMADs. Once activated, SMAD2/3 separates from the receptor and forms a heterotrimeric structure with SMAD4, and then transfers to the nucleus, where they are transcribed with DNA Factors and cofactors combine to activate or inhibit hundreds of target genes.

The expression of I-SMADs is induced by TGF-β signal as a feedback response. SMADs usually activate or inhibit SMADs through phosphorylation of different kinases and ubiquitination of different ubiquitin ligases, thereby controlling the stability and activity of SMADs. SMAD6 and SMAD7 reduce the phosphorylation and activation of R-SMAD by competing with R-SMADs for binding to the TGF-β receptor complex.

In addition to the typical pathway of TGF-β signal transduction which has been deeply studied and proved to have an important role, non-classical (non-SMAD) signal pathways still exist, but people know little about them. Although the core mechanism of TGF-β signal transduction has been well studied, the interaction of this signal with specific factors and other signal pathways forms a dense network in the regulation of the TGF-β cascade, which indicates that TGF The role of -β in the microenvironment is complex. Any cell signal that affects the TGF-β signaling element will change its effectiveness.

4. The role of TGF-β in the tumor microenvironment

TGF-β plays a dual role in TME, which is determined by the different stages of tumor development and the background of genetic changes. In early tumors, the TGF-β pathway can induce apoptosis and inhibit cell proliferation, including cancer cells.

Paradoxically, in the late stage, it has a tumor-promoting effect by regulating genome instability, EMT, angiogenesis, immune escape and metastasis. When the tumor-promoting function overwhelms the anti-tumor effect of TGF-β signaling in the cell, it will act as a tumor promoter in a consistent manner.

Studies have shown that in a variety of cultured eukaryotic cells (including epithelial cells, endothelial cells, hematopoietic cells and skin keratinocytes), TGF-β exposure promotes the cell cycle to stop through different mechanisms.

TGF-β-mediated growth arrest inhibition usually occurs in the G1 phase of the cell cycle, when cells are sensitive to TGF-β. One of the important mechanisms is that TGF-β inhibits the transcription of MYC, which is necessary for the development of G1 phase to S phase.

Many genetic and epigenetic changes have been found in many cancers, and these changes result in the autonomous conversion of TGF-β signaling from tumor suppression to promotion.

Many studies have shown that SMAD2, SMAD3, SMAD4, TGF-βRI and TGF-βRII have gene mutations or deletions in many tumor types. SMAD4 is the most common change. It plays a leading role in the process of cancer. Its mutations lead to the loss of tumor suppressor effects of multiple TGF-β superfamily members. SMAD2 gene mutations have also been reported in hepatocellular carcinoma (HCC), colorectal cancer and lung cancer.

4.3 The regulatory effect of TGF-β on tumor EMT

It is generally believed that EMT induced by TGF-β is an important step in tumor invasion and metastasis. E-cadherin is a key protein that maintains the adhesion of epithelial cells to adhesion junctions. TGF-β induces the expression of transcription factors SNAIL, ZEB and TWIST, and inhibits the expression of E-cadherin, thereby regulating cell adhesion and extreme Sex and reorganization of the cytoskeleton.

In addition, TGF-β enhances the activity of metalloproteinases (MMP), allowing the remodeling of the cytoskeleton.

4.4 The role of TGF-β in angiogenesis

TGF-β has been proven to stimulate angiogenesis and act as a pro-angiogenic factor. TGF-β induces the expression of vascular endothelial growth factor (VEGF), which is an important angiogenic factor in vitro.

In the diffuse gastric cancer model, the disruption of TGF-β signaling seems to accelerate tumor growth by increasing tumor angiogenesis. Therefore, the promotion of TGF-β in angiogenesis depends on the type and environment of the tumor.

5.  The role of TGF-β in the immune system

As an immunosuppressive cytokine, TGF-β exerts a wide range of inhibitory effects on the immune response through different mechanisms. TGF-β reduces the differentiation and function of Th1, Th2 cells and cytotoxic T lymphocytes (CTL), all of which provide important anti-tumor responses. 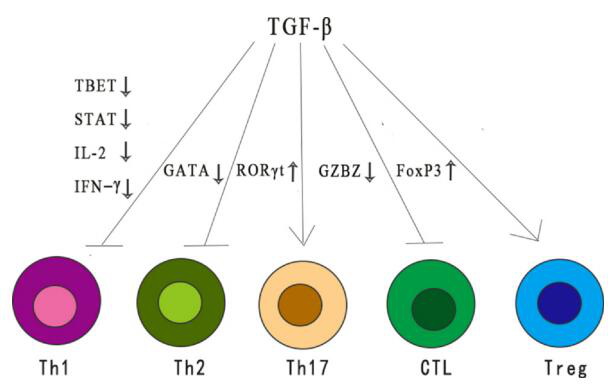 Although there are many factors that increase the complexity of TGF-β signal transduction, TGF-β signal-targeted drugs show strong activity in tumor treatment. In addition, the clinical success of ICIs has accelerated people’s interest in using TGF-β signaling as an enhanced anti-cancer treatment. 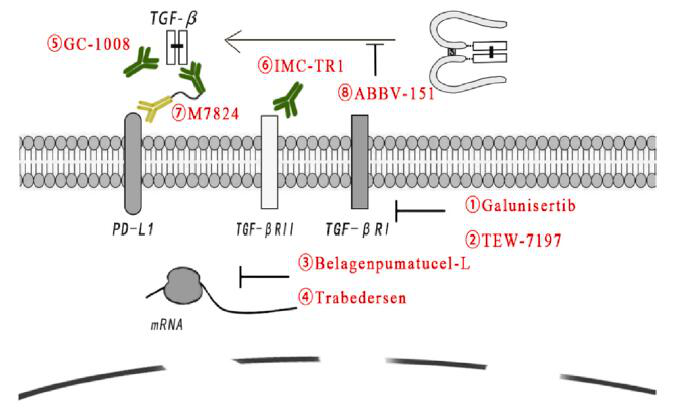 Galunsertib (LY2157299) is the first small molecule blocker to enter clinical trials and is the most widely studied. It inhibits TGF-βRI kinase, thereby blocking the receptor-mediated signal cascade. Galunisertib, as a monotherapy or in combination with standard anti-tumor treatment regimens, has anti-tumor activity, and its indications include HCC, pancreatic cancer (PAC) and other tumor types.

In a phase 1/2 clinical trial, compared with placebo gemcitabine, Galunisertib combined with gemcitabine treated PAC patients with a significant improvement in OS.

TEW-7197 is another TGF-βRI kinase inhibitor. A phase 1 study of TEW-7197 (NCT0216016) was conducted in advanced solid tumors to study its safety, tolerability and pharmacokinetics. Other TEW7197 clinical trials are testing the effects of single-drug or combined treatments with other drugs in various cancers.

Belagenpumatucel-L (Lucanix) is a therapeutic, genetically modified allogeneic tumor cell vaccine for NSCLC to inhibit the production of TGF-β2 mRNA. Although the phase 3 trial for NSCLC did not reach the predetermined clinical endpoint, additional analysis showed encouraging results in patient subgroups. Among patients randomized to Lucanix treatment within 12 weeks after the end of first-line chemotherapy, it was observed Significant increase in OS.

Trabedersen (ap12009) is the antisense complement of the mRNA region of TGF-β2 gene, which exerts an inhibitory effect by down-regulating TGF-β2 mRNA. In a phase 2 study, patients with relapsed/refractory advanced glioma treated with 10 mM trabedersen had a higher 2-year survival rate compared with standard chemotherapy.

GC-1008 (fresolimumab) is a human monoclonal antibody that can neutralize all subtypes of TGF-β. In the phase 1 trials of malignant melanoma (MM) and renal cell carcinoma (RCC), GC-1008 showed preliminary evidence of anti-tumor activity and acceptable safety. The median progression-free survival (PFS) of all 29 patients was comparable to the median PFS of patients with advanced MM who received dacarbazine or other chemotherapy. Reversible skin disease was the main adverse event observed, and no dose-limiting toxicity was observed.

In the phase 1 clinical trial, the objective response rates (ORRs) of NSCLC patients with PD-L1-positive and PD-L1 high-expressing platinum-pretreated NSCLC patients treated with a dose of 1200 mg were 36.0% (n=10/27) and 85.7%, respectively (N=6/7), the curative effect is encouraging and has a manageable tolerance. In the phase I dose expansion cohort of patients with advanced squamous cell carcinoma of the head and neck (SCCHN), the disease control rates of patients with PD-L1-positive and PD-L1-negative tumors were 24% and 33%, respectively, and the 18-month OS rate was respectively It is 40% and 50%. In addition, patients with HPV-positive tumors (33%) had higher ORR values ​​than those with HPV-negative tumors (5%).

The complex process that affects the active release of TGF-β is another therapeutic intervention. The anti-GARP antibody ABBV-151 blocked its binding to LAP and significantly slowed the lung metastasis of breast cancer cell lines. Its phase 1 clinical trial (NCT03821935) is underway as a monotherapy or in combination with ABBV-181 (anti-PD1 monoclonal antibody) to treat locally advanced or metastatic solid tumors.