Why CD47 can lead the wave of tumor immunity?

Why CD47 can lead the wave of tumor immunity? CD47 is a widely expressed transmembrane glycoprotein, also known as integrin-associated protein (IAP), with a molecular weight of 52 kDa.

CD47 binds to the N-terminus of the signal regulatory protein α (SIRPα) on immune cells to send a “don’t eat me” signal to inhibit the phagocytosis of macrophages, thereby protecting healthy cells from being destroyed by the immune system.

CD47 is a multifunctional molecule:

It binds to CD47 ligand signal-regulatory protein (SIRP)-α, SIRP-y and interacts with integrin to regulate cell-to-cell communication. CD47 binds to SIRP-α on the surface of macrophages and activates tyrosine phosphorylase to inhibit the accumulation of myosin at the assembly site under the synaptic membrane of macrophages as a “don’t eat me” signal.

Loss of CD47 can lead to phagocytosis of old or damaged cells. But it also exists on the surface of cancer cells and is more widely expressed. Cancer cells use the mechanism of action of CD47 and macrophages to escape macrophages and make the body lose its position in the first line of defense against cancer cells.

It binds to thrombin reactive protein-1 and participates in the interaction between cells and extracellular matrix.

It is closely related to cytological processes such as apoptosis, proliferation, adhesion, migration, etc. It plays a key role in immune and cardiovascular response, and is a new target for the treatment of cardiovascular diseases.

It is related to tumor immune escape and has an important impact on the microenvironment of tumor cells.

The CD47-SIRPα (signal-regulatory protein α) signaling pathway is also known as the “don’t eat me” signal, which was first discovered in 1990. SIRPα is the first protein member of the SIRP family to be discovered, which is expressed in myeloid cells, including macrophages of all forms. It was not until 1999 that the interaction between SIRPα and CD47 was confirmed by using monoclonal antibodies (CC2C6) and using COS7 cells to express mouse brain cDNA libraries.

Macrophages are an important part of innate immunity and are a kind of “professional” phagocytic cells. They can act as human scavengers by engulfing senescent and dead cells in the human body. Macrophages in tumor tissues can clear tumor cells through phagocytosis, but phagocytosis is inhibited by the CD47-SIRPα immune checkpoint pathway; when CD47 and SIRPα bind, it can cause ITIM tyrosine phosphorylation.

Phosphorylated ITIM then recruits and activates the tyrosine phosphatase SHP-1/2 protein, and the activated tyrosine phospholipase further dephosphorylates a series of proteins in the cell and loses related biological functions. To inhibit the phagocytic function of macrophages. This function can be used to mark “self” and “non-self” in a normal human environment to avoid “injury”.

Initially, the researchers adopted the red blood cells of CD47-deficient mice into normal mice. These red blood cells were quickly cleared by the spleen giant cells of wild-type recipient mice. As a result, the “Don’t eat me” function of CD47 was eliminated. Gradually reveal.

When the phagocytic tumor cells are bound by IgG in the body through opsonization, the Fc domain of IgG binds to the FcR on the surface of macrophages to activate the macrophages. The activation of the FcR signaling pathway will form a “phagocytic synapse” between tumor cells and phagocytes.

Three things happen in the phagocytic synapse: the contact between tumor cells and phagocytes, and the pseudopods of macrophages surround the tumor. Cells finally complete the phagocytosis of tumor cells; current research results show that CD47-SIRPα mainly achieves its immune checkpoint function by blocking the formation of macrophage pseudopods.

Because the aforementioned CD47-SIRPα acts as an immune checkpoint in macrophages, in theory, this target can be used as a pathway for tumor treatment.

First, blocking this pathway can break the immunosuppression of macrophages and induce phagocytosis of tumor cells by macrophages.

Second, in addition to macrophages, CD47-SIRPα can also inhibit the function of DC cells. Blocking this pathway can promote the uptake of tumor cells by DC cells, which is conducive to the presentation of tumor antigens.

Third, the Fc part of the anti-CD47 antibody can trigger NK cells in the body to kill tumor cells through ADCC and CDC. 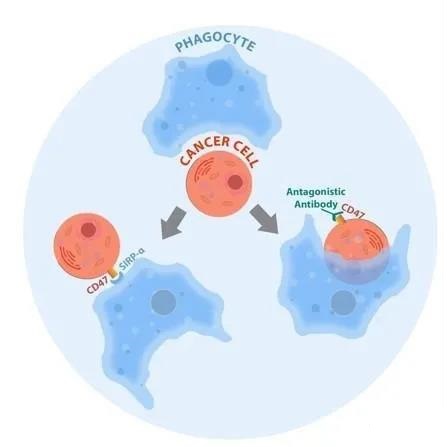 The CD47 antibody targets a variety of indications, including non-Hodgkin’s lymphoma (NHL) and acute myeloid leukemia (AML) and other hematological malignancies, as well as entities such as colorectal cancer, ovarian cancer, breast cancer, bladder cancer, and head and neck cancer. tumor.

The activation of CD47 seems to promote cell migration universally. It has been proven in a variety of tumor models that blocking the function of CD47 can inhibit tumor metastasis. Antibody blocking CD47 can reduce the migration of melanoma, prostate cancer and ovarian cancer-derived cells and the chemotaxis of collagen IV.

With more and more researches on the CD47 molecule, people’s understanding of its function is getting deeper. With the continuous deepening of research, more and more monotherapy and combination therapies targeting immune checkpoint CD47-SIRPα have entered the stage of clinical trials.

The study of CD47 in tumor immunity has broad prospects. It serves as a “don’t eat me” signal to promote tumor cells to escape the phagocytosis of macrophages. This has become a new mechanism for tumor occurrence and development, and it also explores a new path for tumor immunotherapy. Effective way. This reflects the current strong clinical demand for new, safe and effective tumor immunotherapy drugs and technologies.