Bone marrow-derived suppressor cells (MDSCs) are pathologically activated neutrophils and monocytes with strong immunosuppressive activity. They are related to the regulation of immune response under many pathological conditions, and are closely related to the adverse clinical outcome of cancer. There are important differences between MDSCs and typical neutrophils and monocytes.

The latest research describes some new features of MDSCs in the genome and metabolism. These features shape the specific functions of MDSCs and help to build on these. Cell targeted therapy, especially in cancer and autoimmune diseases. The function of the former MDSCs makes the disease worse, the latter MDSCs can limit the severity of the disease.

Definition and basic characteristics of MDSCs

There are two major types of MDSCs in humans and mice, which are classified from granulocyte lines and monocyte lines according to their sources, namely granulocyte/polymorphonuclear cell MDSCs (PMN-MDSCs) and monocyte MDSCs (M- MDSCs). In addition, a small group of myeloid precursor cells with characteristics of bone marrow mesenchymal stem cells was found in humans and was named “early bone marrow mesenchymal stem cells.” This group of cells has a powerful immunosuppressive function, mainly composed of myeloid progenitor cells and precursor cells, accounting for less than 5% of the total number of MDSCs.

The pathological state of immune activation is a common feature of MDSCs. Typical bone marrow cell activation is a response to pathogens and tissue damage, mainly through risk-related molecular patterns (DAMPs), pathogen-related molecular patterns (PAMPs) and Toll-like receptors (TLR). ) Activate to drive. In contrast, pathological activation is due to the continuous stimulation of myeloid cells due to the long-term existence of myeloid growth factors and inflammatory signals in the environment of cancer, chronic infection or inflammation, and autoimmune diseases. Examples of such activation signals include cytokines and various growth factors, such as GM-CSF, M-CSF, IL-6, IL-1β, adenosine signals, or endoplasmic reticulum (ER) stress signals. 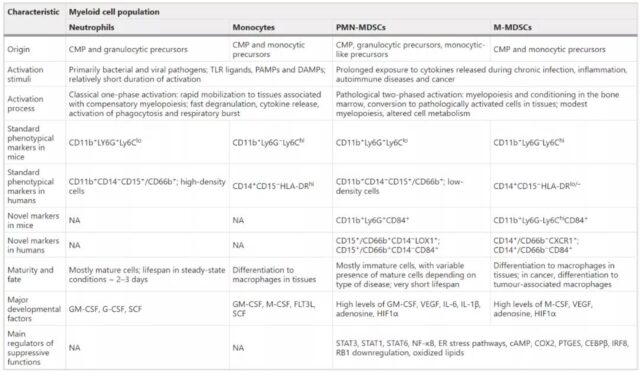 In recent years, lectin-type oxidized low-density lipoprotein receptor 1 (LOX1) has become a specific marker of human PMN-MDSCs, which can be used to identify these cells in the blood of tumor patients and tumors. In addition, by detecting the expression of MHCⅡ, M-MDSCs can be distinguished from peripheral blood mononuclear cells. In addition, new molecules discovered recently may help to further characterize these cell populations. 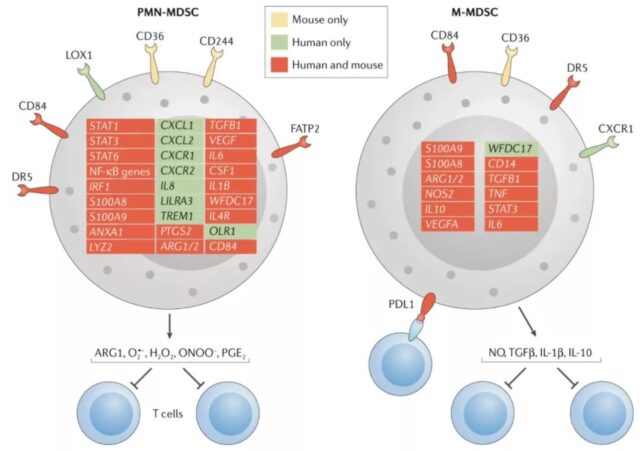 They also have unique characteristics that may affect their ability to regulate different aspects of the immune response. For example, PMN-MDSCs preferentially use reactive oxygen species (ROS), peroxynitrite, arginase 1 and prostaglandin E2 (PGE2) to mediate immunosuppression, while M-MDSCs use nitric oxide (NO), immune Inhibit the expression of cytokines (such as IL-10 and TGF-β) and immunomodulatory molecules (such as PD-L1).

M-MDSCs and monocytes also have different transcription profiles. M-MDSCs showed up-regulation of several genes related to neutrophil function, including CXC chemokine receptor 1 (CXCR1). There is a large amount of overlap between the genetic characteristics of PMN-MDSCs and M-MDSCs, indicating that both neutrophils and monocytes can obtain similar immunosuppressive characteristics.

CD84 was identified as a marker of MDSCs in tumors. CD84 is expressed at high levels in PMN-MDSCs isolated from primary tumors and spleen. MDSCs with high CD84 expression show T cell suppression and increased reactive oxygen generation. In summary, MDSCs have a unique transcription profile, which is characterized by the expression of pro-inflammatory and immunosuppressive pathways. Distinguishing MDSCs from traditional monocytes and neutrophils is essential for designing effective therapies against MDSCs.

Metabolic reprogramming is one of the hallmarks of tumors. Tumor cells reprogram their metabolism to maintain high energy requirements, thereby supporting rapid proliferation, survival and differentiation. The competition between nutrients and oxygen in the tumor microenvironment forces immune cells to adapt to their metabolism. MDSCs perceive the environment and respond by selecting the most effective metabolic pathway to maintain their inhibitory and tumor-promoting functions.

At present, there is ample evidence that the lipid metabolism of MDSCs is altered, which plays a key role in their differentiation and function.

Lipid uptake mediated by up-regulation of scavenger receptor CD36 facilitates the transition from glycolysis to fatty acid oxidation (FAO) as the main energy source for tumor-related MDSC. CD36 deletion or FAO inhibition affects the inhibitory function of MDSCs, delays tumor growth, and improves the efficacy of chemotherapy and immunotherapy.

MDSCs showed an increase in glycolysis, pentose phosphate pathway and tricarboxylic acid cycle during differentiation and activation. The up-regulation of glycolysis pathway prevents ROS-mediated apoptosis through the antioxidant activity of glycolysis intermediate phosphoenolpyruvate, thereby protecting MDSCs from apoptosis and promoting their survival.

Under hypoxic conditions, the activation of hypoxia-inducible factor 1α (HIF1α) induces the transition of MDSC from oxidative phosphorylation to glycolysis. HIF1α is a key regulator of the differentiation and function of MDSCs in the tumor microenvironment. HIF1α promotes the differentiation of M-MDSCs into tumor-associated macrophages through a mechanism involving the down-regulation of CD45 tyrosine phosphatase activity and STAT3 activity.

MDSCs regulate T cell function by removing essential metabolites such as arginine, tryptophan and cysteine ​​from the microenvironment. The decrease of arginine through the up-regulation of arginase 1 is one of the T cell suppression mechanisms of MDSCs. The catabolism of arginine through NOS2 is another key inhibitory mechanism of MDSCs, and the peroxynitrite released by it can induce T cell apoptosis and inhibit T cell function and migration. IDO-dependent tryptophan metabolism is another way for MDSCs to suppress the immune response. MDSCs reduce the level of tryptophan in the external environment by inducing IDO. IDO breaks down this essential amino acid into N-formylkynurenine.

Although bone marrow mesenchymal stem cells have a short lifespan in tissues, they are constantly recruited to chronic inflammation sites, enabling them to have a lasting effect in these sites. However, due to their short life span in the tissues, the pathological activation of these cells in the tissues is difficult to reverse. Therefore, effective treatment can be targeted therapy by blocking the differentiation of MDSCs and inhibiting their migration to affected tissues, or by controlling the tissue microenvironment. 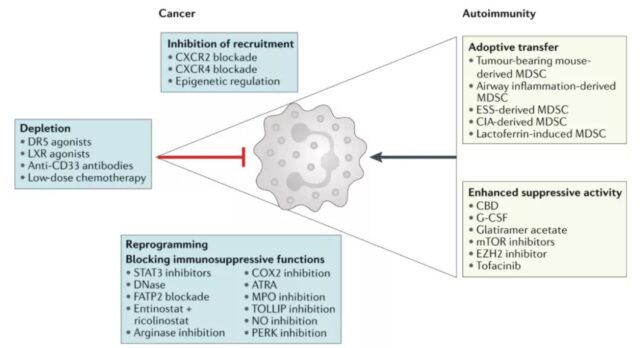 Affect the recruitment of MDSCs

The migration of neutrophils and PMN-MDSCs to tumors is mainly driven by the chemokine receptor CXCR2. Blocking the recruitment of PMN-MDSC to tumors by knocking out CXCR2 or using small molecule CXCR2 inhibitors can improve the prognosis of metastatic sarcoma and enhance the efficacy of anti-PD-1 therapy in established tumors.

MDSCs are short-lived cells that are constantly replaced and released into the blood circulation. Depletion of high turnover rate cells can be a challenge, but several methods have provided encouraging results. Chemotherapy drugs, such as 5-fluorouracil, carboplatin, paclitaxel or gemcitabine, can reduce the number of circulating MDSCs and promote a stronger anti-tumor immune response, but these drugs are not specific to MDSCs and affect all rapidly proliferating cells, including Anti-tumor T cells.

A more sophisticated method is to use antibodies to recognize CD33, a marker expressed on the surface of human myeloid cells. In a phase II clinical trial, a monoclonal anti-CD33 antibody (gemtuzumab) conjugated to a toxin (ozogamicin) showed a good effect of removing CD33-expressing MDSCs.

The recognition of CD33 has been used for the CD16 and IL-15 tri-specific killer receptors (TriKE) in hematological malignancies. This molecule (GTB-3550) cross-links CD33 and CD16 expressed by NK cells, and induces the cytotoxicity and proliferation of ADCC and NK cells. Although GTB-3550 has been shown to reduce the inhibitory effect of MDSC on TIGIT-mediated NK cells, the absence of MDSCs dependent on ADCC may be another possible mechanism of action.

The activation of endoplasmic reticulum stress is a characteristic of MDSCs, which distinguishes them from monocytes and neutrophils. Activation of the endoplasmic reticulum stress pathway induces the up-regulation of DR5 (a TRAIL receptor) on MDSC, and targeting this molecule can quickly induce MDSC apoptosis. An agonistic DR5 antibody DS-8273a was also tested in a phase 1 clinical trial. This treatment is well tolerated and induces a selective reduction of MDSCs in patients with different types of advanced cancer, which is related to the increase in progression-free survival.

Liver X receptor (LXR) has a significant impact on the survival of MDSC. LXR activation can induce apoptosis of MDSCs in tumor-bearing mice through apolipoprotein E (APOE) signal transduction, thereby significantly reducing the number of MDSCs. Preclinical tumor models respond well to two LXR agonists: GW3956 and RGX-104. RGX-104 is currently undergoing a phase I clinical trial. Preliminary results show that the drug can promote T cell activation and can effectively reduce the number of PMN-MDSC and M-MDSC in the circulation.

Blocking the immunosuppressive function of MDSC can improve the anti-tumor immune response. Early studies have shown that all-trans retinoic acid (ATRA) promotes the differentiation of mouse and human MDSCs into macrophages and dendritic cells, and kills PMN-MDSCs. In preclinical models of breast cancer, removal of MDSCs by ATRA treatment has been shown to increase the efficacy of VEGFR2 inhibitors as anti-angiogenic treatments.

Treatment of mice with the FATP2 inhibitor lipofermata can significantly reduce tumor growth. In addition, it has a synergistic effect with anti-CTLA4 antibody therapy. Since PGE2 biosynthesis is considered to be a downstream target of FATP2, these results are consistent with the role of PGE2 as an effective inhibitor of T cell function in cancer.

Recent studies have shown that the PERK pathway that targets the endoplasmic reticulum stress response can reprogram tumor-related M-MDSCs into cells with anti-tumor functions. In preclinical models, inhibition of PERK enhances the efficacy of checkpoint inhibitors. Another method is to target TOLLIP, which is a signal adaptor molecule expressed in bone marrow cells and participates in the immunosuppressive function of PMN-MDSCs. Although TOLLIP blockers have not been tested in studies, these findings make TOLLIP an interesting target for cancer immunotherapy.

MDSCs are also related to the occurrence or progression of inflammatory bowel disease. In mouse models of colon inflammation, the use of histone methyltransferase inhibitors reduces the severity of the disease by inducing the accumulation of immunosuppressive MDSCs in the colon. In addition, mTOR inhibitors and glatiramycin acetate (a compound approved for the treatment of multiple sclerosis) have shown efficacy in the treatment of mouse colitis models by enhancing the inhibitory function of MDSCs.

New evidence shows that MDSCs play a key role in the formation of immune responses in many pathological environments. Although we have understood the key gene transcription profiles and metabolic characteristics of these cells, the identification and analysis of the precise genomic characteristics of MDSCs in the clinical setting remains to be established.

A major challenge will be to determine whether PMN-MDSCs can be subdivided into smaller populations with specific functional characteristics, or whether they represent discrete single populations different from classical neutrophils; the same is true for M-MDSCs.

Finally, the most challenging issue remains how to best target MDSCs selectively. Perhaps in the next few years, through vigorous efforts, we may see whether targeting these cells can improve clinical outcomes in different disease environments.