Immunotherapy has changed the current mode of cancer treatment, especially immune checkpoint inhibitors, which have achieved remarkable results in cancers such as melanoma.

Immune checkpoint inhibitory antibodies including CTLA-4, PD-1/PD-L1 are approved by the FDA for the treatment of multiple cancer types.

However, only 20-30% of cases have observed a long-lasting response. Therefore, there is an urgent need for new immunotherapy targets.

BTLA (CD272) is another important co-inhibitory receptor, and its ligand is the herpes virus invasion mediator (HVEM).

Although BTLA has similarities with PD-1 and CTLA-4, they differ in expression and function. HVEM is widely expressed in various cell types and participates in immune homeostasis.

The expression of HVEM is up-regulated in a variety of tumors, and targeting BTLA and HVEM shows very promising application potential in tumor immunotherapy.

In addition, BTLA-positive DC cells participate in peripheral Treg induction. These data emphasize the importance of BTLA in immune homeostasis.

HVEM (TNFRSF14) is a member of the TNF receptor family. HVEM is highly expressed in the lung, kidney and liver, moderately expressed in the heart, placenta, skeletal muscle and pancreas, and extremely low in the brain. Among immune cells, HVEM is strongly expressed by resting T cells and B cells, NK cells, Treg, monocytes, and DC. Mesenchymal cells and epithelial cells also express HVEM. In epithelial cells, HVEM expression plays a key role in innate mucosal defense against pathogenic bacteria. 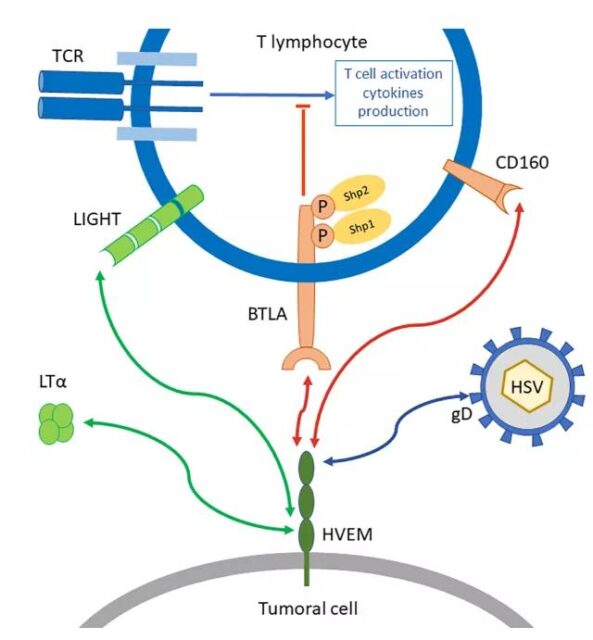 The interaction between HVEM and BTLA is the earliest connection between the Ig structure and the TNFR family.

Therefore, HVEM is generally described as a molecular switch that depends on the attached ligand.

However, HVEM-/- mice have increased response to T cell stimulation and increased susceptibility to autoimmune diseases, indicating that the co-inhibitory signal of HVEM is stronger than the co-stimulatory signal.

The role of HVEM in tumors

Up-regulation of HVEM in tumors represents an immune escape mechanism, similar to tumor cells overexpressing PD-L1 or PD-L2. HVEM is overexpressed in some tumors and shows that tumor-infiltrating T cells are BTLA positive. In addition, high HVEM expression is associated with a significantly poorer prognosis.

In another study of 136 gastric cancer biopsies, increased HVEM expression was associated with disease progression and decreased overall survival.

In another study on glioblastoma, through IHC evaluation of 34 glioma tissues, HVEM expression was located in the surrounding necrotic area and microvascular hyperplasia area. According to transcriptomics analysis, HVEM expression is related to immune cell infiltration and stromal cells in the microenvironment.

The expression of HVEM is also related to the expression of PD-1, PD-L1, CTLA-4, LAG-3, and VISTA. Therefore, HVEM plays a vital role in the regulation of immune and inflammatory responses, especially T cells. activation.

In summary, these data indicate that the upregulation of HVEM is closely related to the tumor progression and aggressiveness of many solid cancers.

The role of BTLA in tumors

Studies have shown that the expression of BTLA in malignant tissues is higher than that in normal tissues, and higher BTLA expression is positively correlated with higher HVEM expression. In addition, BTLA expression affects the prognosis.

BTLA is related to the expression of other co-inhibitory receptors. In advanced melanoma, Fourcade et al. demonstrated that 42% of NY-ESO-1-specific CD8+ T lymphocytes co-express BTLA and PD-1, and these cells have a partially dysfunctional phenotype.

When NY-ESO-1 specific CD8+ T lymphocytes are stimulated by homologous antigens for a long time, TIM-3 and PD-1 are up-regulated.

BTLA expression follows a different pattern, which suggests that BTLA upregulation depends on different conditions, rather than functional exhaustion driven by high antigen load. In addition, blocking BTLA with anti-BTLA antibodies can enhance the production of IFN-γ, TNFα and IL-2 by NY-ESO-1 specific CD8+ T cells.

Interestingly, when anti-BTLA is combined with anti-PD-1, a synergistic effect is observed in the functional analysis.

In lung cancer, the expression and function of BTLA are unclear, however, some key data have been reported. In a mouse model of subcutaneous lung tumor implantation, Mittal et al. showed increased BTLA on CD4+ and CD8+ T cells, as well as other co-inhibitory markers, such as PD-1 and 2B4.

Thommen et al. confirmed and expanded the study in human lung tumor samples. The study conducted a detailed immunophenotyping of TIL in NSCLC biopsy, and found that the expression of PD-1 and Tim-3 in advanced tumor-infiltrating CD8+ T cell subsets increased. The percentage of BTLA-positive cells is quite low, but follows the same pattern as PD-1 and TIM-3.

It is worth noting that, compared with the PD-1int subgroup, the number of TIM-3, CTLA-4, LAG-3 and BTLA expressed by PD-1high is also higher. Therefore, the joint strategy with PD-1 blocking is a direction worth exploring.

It is worth noting that Lou et al. studied the correlation between epithelial-mesenchymal transition (EMT) and immune activation in lung cancer, confirming that EMT is closely related to the transcriptomic characteristics of inflammation.

In addition, in tumors showing EMT, the transcriptome expression of immune checkpoints, including BTLA, is increased and is associated with the recruitment of regulatory T cells.

This indicates that EMT can be regulated by the inflammatory microenvironment through a BTLA-dependent mechanism, which opens up a new research field for exploring the expression of BTLA on non-immune cells.

In short, BTLA-HVEM does participate in immune escape in tumor immunity. In fact, the up-regulation of HVEM by tumor cells participates in suppressing anti-tumor immunity through BTLA, leading to disease progression and poor prognosis.

Blocking the inhibition triggered by BTLA can further improve the function of tumor infiltrating lymphocytes, and the combined blocking of BTLA and PD-1 shows a significant synergistic effect.

Therefore, targeting BTLA or HVEM is a promising new direction.