Guide to Dendritic Cell Markers.   Dendritic cells (DC) are immune cells derived from bone marrow and can be found in the blood, lymphatic organs and various tissues in the body.

They are usually star-shaped in morphology, with branched dendrites similar to neurons.

DC is a multi-purpose participant in the immune system, acting as a mobile messenger that can perform innate and adaptive immune functions. DC have innate immune function, they can recognize and respond to pathogen-related and danger-related signals. DCs can absorb and present antigens by engulfing pathogens. Then, the activated DC will migrate to the lymph nodes, interact with T cells and B cells, and directly affect adaptive immunity.

DC also plays a role in inflammation and cancer progression, highlighting more potential applications in treatment. Much work has been done in trying to fully understand the complexity and diversity of dendritic cell populations in mice and humans. In this article, we will review the main dendritic cell subsets and their associated protein markers.

In the classic model of dendritic cell (DC) development, hematopoietic stem cells in the bone marrow produce macrophages and DC precursors (MDP). Cells that do not have to be monocytes or macrophages will differentiate into common DC precursors (CDP). From this subset, the pre-DC will leave the bone marrow and migrate to lymphoid and non-lymphoid tissues to mature into conventional DC (cDC).

According to reports, FLT3 is a marker of MDP, CDP, and pre-DC. Other markers include CX3CR1 (MDP), CSF1R (CDP) and ITGAX (before DC). It should be noted that recent studies have shown that each DC ancestor may follow a predetermined path from early development, which is contrary to a series of fate decisions that occurred during the MDP and CDP stages. 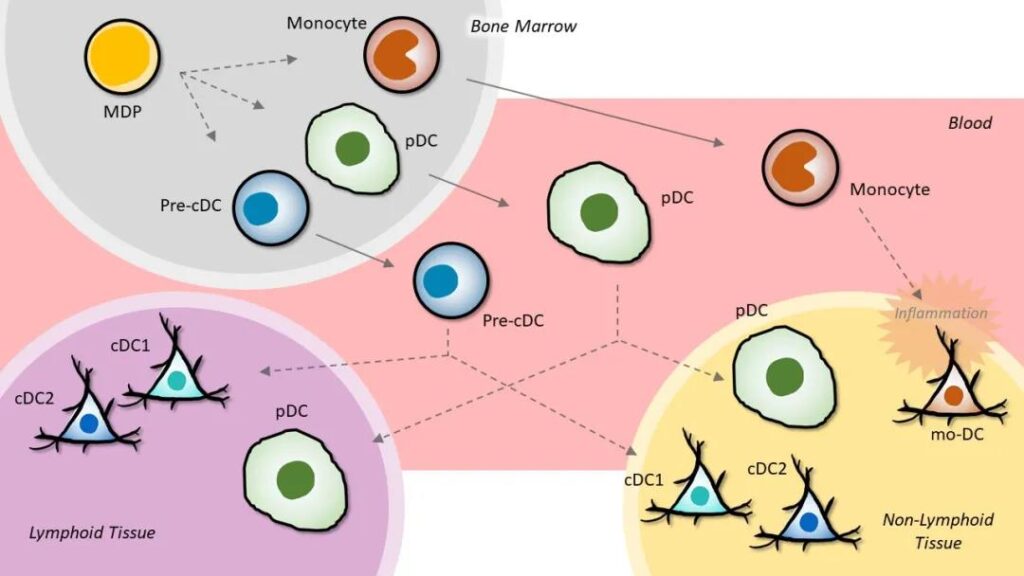 The DC subset is characterized by irregularly shaped cells with many cell membrane processes.

In particular, they are known to be specifically used to absorb antigens and present them to naive T cells in an adaptive immune manner. cDC is further divided into two main subgroups, namely cDC1 and cDC2.

Mouse and human CDC1 have been found to have high intensity cross-presentation and can effectively trigger CD8+ T cells against extracellular antigens such as those of bacteria and viruses.

They are known to secrete interleukin 12 and type I and type III interferons, and are believed to promote Th1 helper T cells and natural killer responses. According to reports, human cDC1s can effectively present necrotic antigen to T cells, partly because CLEC9A binds to exposed necrotic cell actin.

A subset of cDC1 appears to be important in anti-tumor immunity and is associated with a favorable prognosis of cancer. Well-known cDC1 markers include CD8A, CLEC9A, ITGAE, ITGAX, THBD (CD141) and XCR1.

cDC2 is a major subset of DCs that reside in blood, tissues and lymphatic organs. They express a variety of pattern recognition receptors, including Toll-like receptors and lectins, which can drive innate immune responses. They have been shown to induce Th2 and Th17 helper T cell responses, and their role in inducing CD4+ T cell responses has been proposed. cDC2 seems to have many regulatory effects, such as inducing regulatory T cells in the intestine and maintaining tolerance in the liver. It is believed that human cDC2 is heterogeneous, and it has recently been suggested to include more different subtypes. Commonly mentioned cDC2 markers include CD1C, CD207, ITGAM, NOTCH2 and SIRPA.

Plasmacytoid dendritic cells (pDC) mature directly from CDPs in the bone marrow before migrating to the blood and surrounding lymphoid tissues. These round plasmacytoid cells are fewer than regular cells.

pDC is known for its rapid production of type I and type III interferons and cytokines, which makes it an important subset for dealing with acute or chronic viral infections. pDC expresses MHC II and may be able to act as an antigen presenting cell. There are also subsets among pDCs.

It has been found that a population defined by high CD2 expression specifically induces CD4+ T cell proliferation. After stimulation, it is reported that pDCs also activate CD8 + T cells. The markers of pDC include CLEC4C, LILRB4, NRP1, CCR7, B220 (mouse) and SiglecH (mouse).

Markers for other dendritic cell types

Monocyte-derived dendritic cells (MO-DC): In the in vitro study of dendritic cells, monocytes can stimulate differentiation into dendritic cells with certain factors. However, it is now believed that a subset of inflammatory DC can be produced by monocytes recruited from the blood to the tissue during inflammation.

Although this subset has a dendritic morphology, it also has the genetic characteristics of monocyte-derived DC (mo-DC) in vitro. Although the identity of this subset may still need to be further clarified, it is generally believed that mo-DC is produced in response to inflammation, and that this subset will promote the Th17 immune response of CD4 + T cells.

Langerhans cells (LC): LCs are immune cells located in areas of stratified squamous epithelium (such as skin). They originated from macrophages, but due to their phenotype, they are also considered dendritic cell-like. Like dendritic cells, LC can extend dendritic structures, absorb foreign antigens, reach the lymph nodes, and then present the antigens to T cells. Langherans markers include CD1A, CD207 (Langerin) and ID2.

AXL+Siglec6+ dendritic cells (AS DC): The pre-DC population in the blood seems to form a unique functional subset that is different from pDC and cDC. Through the expression identification of two key markers AXL and Siglec6 (CD327), it is reported that this subset can strongly stimulate T cells in lymphoid tissues. It should be noted that AS DC may also be the predecessor of the mature cDC2 and may transition to this subset.

The following table lists human genes (or proteins) that have been described as DC markers in recent literature. Most of the listed are membrane markers expressed on the cell surface. It also includes other defined proteins, including transcription factors and signaling proteins, such as cytokines.

Each marker is accompanied by a link between related antibodies and ELISA kits, because these immunoassay tools are usually used for cell characterization studies through flow cytometry and immunostaining. Related products are provided by many manufacturers and can be used as a useful reference for the immunoassay of dendritic cells.