Tolerant dendritic cells treat autoimmune and inflammatory diseases.  The expression profiles and surface markers of different DC groups are not only different between species, but also in different tissues of the same organism.

Differentiation and classification of dendritic cells

Dendritic cells are a kind of heterogeneous natural immune cells. The main types of DCs include traditional DCs (cDCs), which can be divided into different subtypes, plasma cell-like DCs (pDCs) and inflammatory DCs (infDCs), which have different ontogeny, immune characteristics and specific effects. 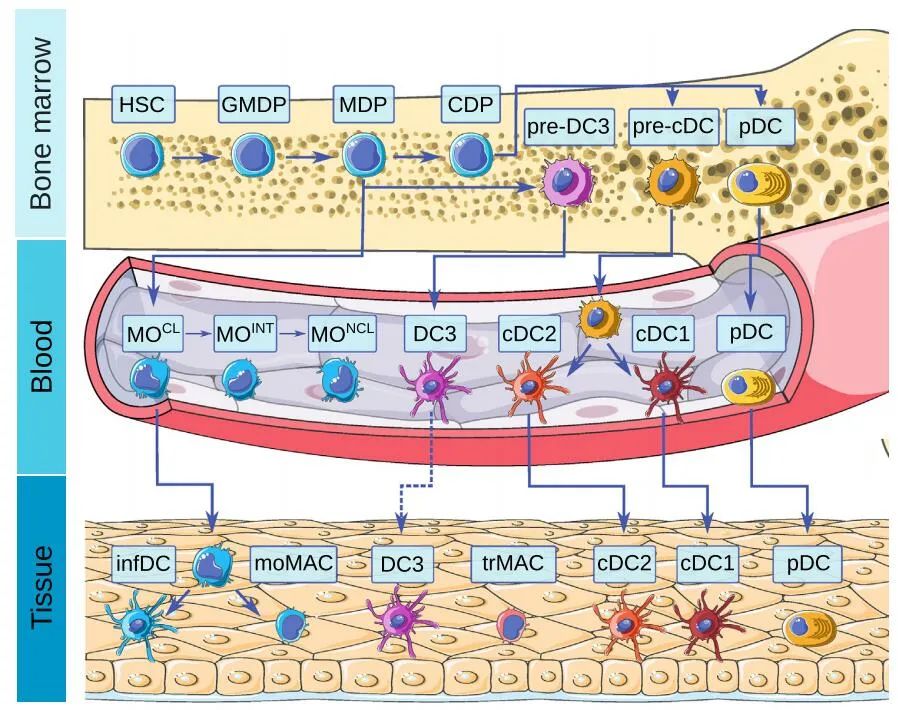 pDC secretes a large amount of type I interferon in response to the virus. pDCs can cross-present antigens and resemble antibody-producing plasma cells in morphology.

The expression profiles and surface markers of different DC groups are not only different between species, but also in different tissues of the same organism.

The role of dendritic cells in peripheral immune tolerance

Dendritic cells are not only the core of coordinating the immune response against threats, but also need to regulate the immune system and induce immune tolerance in a stable state. Specifically, dendritic cells and thymic medullary epithelial cells present self-antigens to single positive CD4+ T cells that react to themselves through MHC-II, and promote their apoptosis when the interaction is strengthened.

However, this process is not enough to completely eliminate self-reactive clones. Other mechanisms of peripheral immune tolerance help maintain the homeostasis of the immune system and prevent responses to “self” or harmless antigens. Similarly, DCs are the key to this process. Specifically, immature dendritic cells (iDCs) have a lower cross-expression ability and fewer co-stimulatory molecule expression phenotypes than mature dendritic cells (mDCs), which endows them with tolerance characteristics and The key role in peripheral tolerance.

There are several mechanisms by which tolDCs induce tolerance in humans and mice. First, when T cells recognize the antigen provided by tolDCs through the interaction between T cell receptors (TCR) and MHC, if there is no costimulatory signal (the T cell CD28 in DCs binds to CD80/CD86), T cells cannot produce IL-2 and proliferate.

Second, the expression of co-inhibitory molecules in tolDCs spreads contact-dependent inhibitory signals in T cells, inhibits proliferation, and promotes clonal incompetence. For example, PD-L1 is an inhibitory surface receptor, and its expression by DCs is involved in tolerance induction. In addition, CTLA-4 can regulate the costimulatory molecules expressed by DCs and impair the initiation of naive T cells.

In addition to the cell-cell contact-dependent mechanism, tolDCs can also produce several resistant cytokines and metabolites. Various types of tolDC produce IL-10, and can induce effector and memory CD4+ T cell anergy in vitro, and promote the differentiation of Treg and Breg that secrete IL-10, IFN-γ and TGF-β.

Finally, tolDCs can directly eliminate T cells through clonal clearance. For example, the interaction between the tumor necrosis factor (TNF)-related apoptosis-inducing ligand (TRAIL) of dendritic cells and the T cell death receptor can promote their apoptosis by activating the caspase pathway. Similarly, Fas, which is up-regulated during T cell activation, can bind to FasL in tolDCs and promote mouse T cell apoptosis.

Immune cell differentiation, including the immunogenicity or tolerance of dendritic cells, requires precise transcriptional regulation, which mainly depends on transcription factors (TFs) and epigenetic mechanisms. Different TFs have been identified in mouse cells and in vitro human differentiation models. For example, in mice, TF PU.1 is considered to be the main regulator of cDC development. In addition, some TFs are related to the polarization of cDC subgroups: BATF3, IRF8, NFIL3, ID2, NOTCH2, IRF4, and KLF4.

TFs work together with epigenetic enzymes to target specific genomic sites, leading to epigenetic modifications. It is well known that epigenetic markers such as DNA methylation and histone post-translational modification can directly or affect cell phenotype and function. Some studies have demonstrated the role of different epigenetic mechanisms in obtaining DC tolerance.

For example, histone deacetylase (HDAC) 11 negatively regulates IL10 gene expression in human and mouse dendritic cells. In addition, oxidized phospholipids produced during certain inflammatory reactions can differentiate dendritic cells derived from human monocytes into a tolerant phenotype in vitro. Specific DNA methylation changes are also related to the acquisition of tolerance. In vitro differentiation of human monocytes in the presence of prostaglandin E2 (PGE2) produces a tolDC, in which PGE2 induces the up-regulation of DNMT3A, which mediates immunogenic genes The methylation and silencing of these cells affect the ability of these cells to inhibit the proliferation of CD8+ T cells in vitro.

Chronic inflammatory diseases are characterized by the destruction of immune homeostasis and long-term or repeated inflammatory responses triggered by specific endogenous or exogenous antigens. Current treatment methods may involve the use of immunomodulators and immunosuppressive agents, from small molecules such as methotrexate to monoclonal antibodies such as Ocreizumab.

The treatment of tolerant DC cells (mo-TolDCs) derived from monocytes represents a promising alternative. It is possible for mo-tolDCs to “re-educate” the immune system by eliminating pathological autoimmunity or inflammatory responses without interfering with protective immunity, so that it tends to become homeostatic. In addition, tolDCs may trigger a self-enhancing tolerance circuit, so it is reasonable to expect that this therapy may provide long-lasting beneficial effects, even therapeutic. 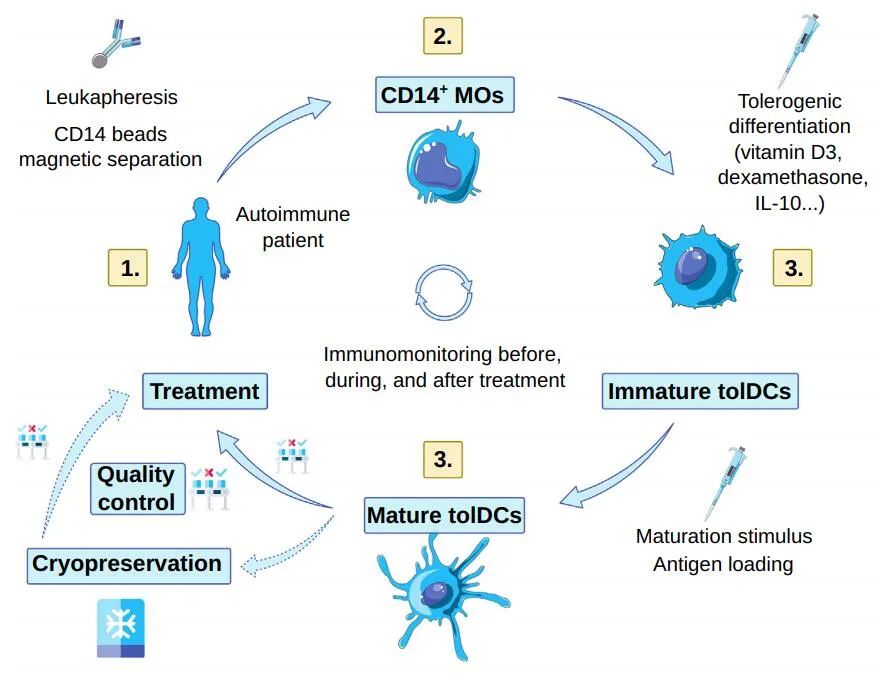 So far, proof of concept of the potential therapeutic effects of tolDCs based on mouse models has been used in RA, T1D, MS and organ transplantation. Based on the continuous in-depth understanding of tolDC biology and the good results of animal models, there are currently multiple phase I clinical trials that are evaluating the safety and feasibility of recipient-derived tolDC therapy in autoimmunity and transplantation. 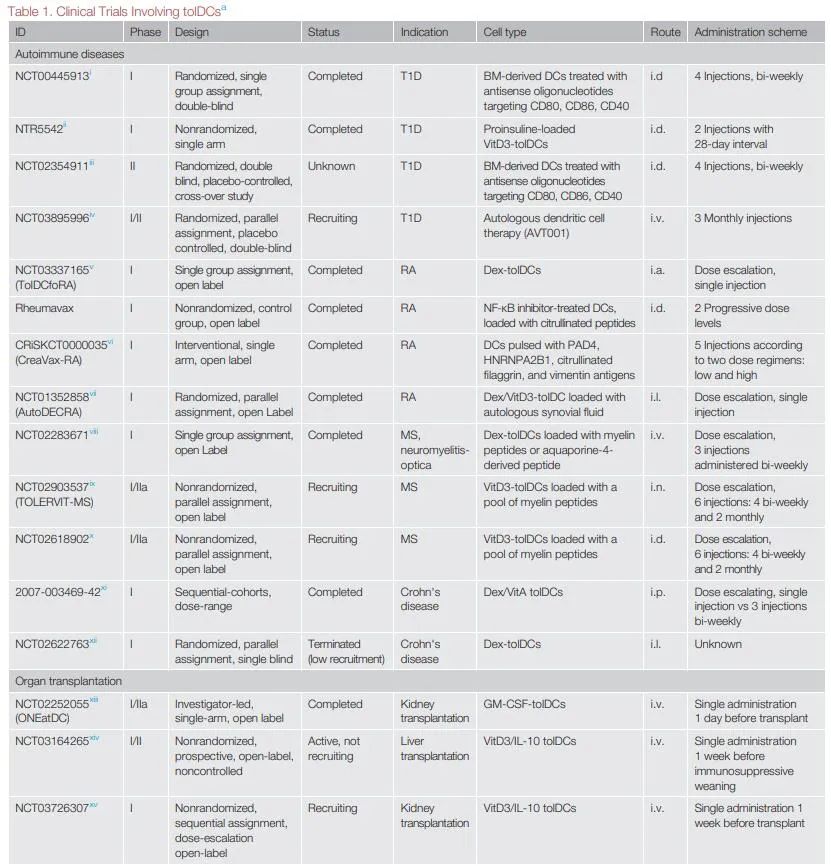 TolDCs are really used in clinical practice, and many problems need to be solved. Different tolDC generation schemes, dosages, routes of administration, targeted diseases, and types of patients involved hinder the comparison of trial data and emphasize the need to coordinate future clinical analysis.

In addition, a key consideration in the development of mo-tolDC-based therapy is that monocytes isolated from patients may have a different phenotype from healthy individuals, resulting in tolDC with different functions. In fact, inflammation can affect the frequency and phenotype of myeloid cells at the transcriptional and epigenetic levels.

In addition, the existence of a large number of steps to produce tolDC with different phenotypes and tolerances constitutes a huge challenge, requiring the establishment of strong quality control indicators to evaluate the phenotype, efficacy and safety of each cell product.

These demands have driven the actions of the United States (Immune Tolerance Network) and Europe (Focus on and Accelerate Actions for Cell-Based Tolerance Induction Therapies) to coordinate the design of trials involving tolerant cell products and immune monitoring. These concerted actions led to six phase I/II clinical trials evaluating the use of various regulatory cell products in kidney transplantation; in addition, there are currently ongoing dose-escalation phase I trials investigating patients with multiple sclerosis Comparative study of intradermal and transdermal administration of VitD3-tolDCs.

In recent years, research on the biology and tolerance mechanism of tolDC has made progress. In particular, the pathways to form these cellular tolerance programs at the transcriptome and epigenome levels are being better understood. In addition, phase I clinical trials have shown that treatment based on tolDC is safe and feasible for certain diseases.

Further research requires us to improve our in-depth understanding of the biology of tolDCs, the purpose of which is to better understand the potential of regulating the immune properties of tolDCs in the context of different diseases. In cell therapy for tumors, the environment plays a key role in the success of specific treatments, which indicates that there is a need to better control the pathological environment in which tolDCs play a role. Together with this method, the analysis of the characteristics of monocytes isolated from patients with specific diseases may play a key role in optimizing the second-generation tolDC therapy. In addition, for inducing immune tolerance, epigenetic changes and epigenetics-based treatments may provide new targets for regulating the adaptability of tolDCs.

Finally, clinical trials and immune monitoring programs must be standardized, which will help to further optimize the clinical transformation of tolDCs, so as to ideally treat various pathological conditions, including certain autoimmune and inflammatory diseases.