Progress and Future of adeno-associated virus in gene therapy

Progress and Future of adeno-associated virus in gene therapy. AAV can not only infect actively dividing cells, but also quiescent cells.

Gene therapy is currently one of the hottest treatment fields, because it targets the underlying cause of the disease rather than just the symptoms.

The therapy can induce gene expression or silencing in diseased cells, and has been successful in preclinical trials, but its clinical application is still limited by the immunogenicity, carcinogenicity, off-target effect and curative effect of gene vectors.

A key consideration for the success of gene therapy is the vector used to deliver therapeutic nucleic acid to express or silence genes.

Recombinant viruses have been used as gene therapy vectors and are more effective in cell uptake, gene integration and long-term gene expression, especially in the body, but they have immunogenicity, potential carcinogenic effects and cumbersome manufacturing processes.

In order to solve these limitations, people have developed non-viral vectors that can avoid immune response, have extensive adjustability and quality control, but their transfection efficiency is low and lead to passive expression of transgenes.

Adeno-associated virus (AAV) is gaining momentum in gene therapy, and more and more clinical trials use it for various treatments. Up to now, FDA-approved AAV-based gene therapies include Luxturna from Sparktherapeutics and Zolgensma from Avexis, which are used to treat hereditary retinal diseases and spinal muscular atrophy, respectively.

AAV is considered to have better safety due to its lower immunogenicity and site-specific integration ability. However, neutralizing antibodies against AAV are ubiquitous in most people, which limits the systemic application of AAV.

People’s current research focuses on engineered AAV, through molecular modification of its capsid, coupling and complexing with small molecules and polymers, and packaging in various artificial and natural carriers (including vesicles, hydrogels and Polymers), used to improve safety, efficacy and multi-modal treatment.

The history and virology of AAV

AAV was first discovered in the 1960s and is considered to be a contaminant of adenovirus culture. However, with the discovery that AAV can only replicate in the presence of adenovirus, and later the existence of herpes simplex virus type 1 (HSV-1), the link between adenovirus and AAV was quickly established.

After determining that AAV can transform mammalian cells, the researchers began to produce recombinant AAV (rAAV). The plasmid containing adenovirus DNA can replicate AAV independently of the helper virus. This discovery promoted the development of this field and truly opened the field of gene therapy for AAV.

AAV is a small, non-enveloped parvovirus with a genome size of ∼4.7kbp in a capsid of 20-25nm. The gene components are two coding regions for replication (REP) and capsid protein (CAP), and there are inverted repeats (ITR) at both ends of the genome.

REP encodes four proteins related to infection, integration and replication, Rep40, Rep52, Rep68 and Rep78, while CAP encodes three proteins, VP1, VP2 and VP3, which respectively make up 60- of AAV in a ratio of 1:1:10. mer capsid. VP3 is the most abundant and constitutes the exterior of the shell structure, while VP1 and VP2 constitute the interior. 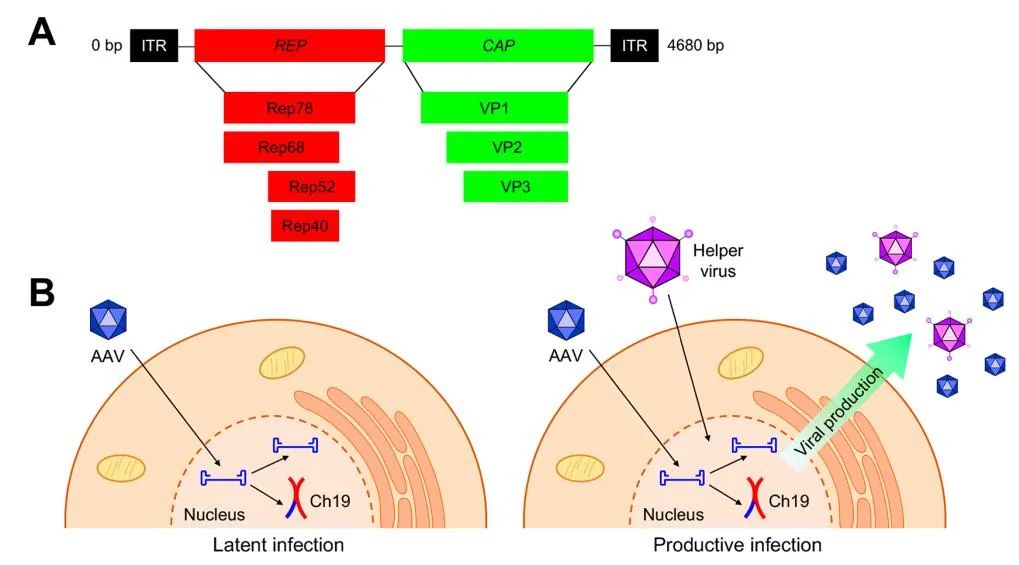 AAV cannot replicate independently. Only when helper viruses (such as adenovirus, herpes simplex virus, vaccinia virus) exist, can it replicate and cytolytic infection, otherwise, only lysogenic latent infection can be established.

AAV integrates its genome into a specific location on chromosome 19, AAVS1, or replicates independently outside the chromosome. AAV is non-pathogenic and does not cause any disease even in its natural state; in addition, it does not have a systemic innate immune response.

A total of 12 natural AAV capsid serotypes were discovered and named AAV1-AAV12, which showed the characteristic of preferentially binding to specific tissues in the body.

AAV can infect not only actively dividing cells, but also quiescent cells, which makes it particularly valuable for many cell populations where viral and non-viral vectors are not sensitive to gene delivery, such as retinal cells and neuronal cells.

The natural ability of AAV to infect quiescent cells has contributed to many significant advances in gene therapy, such as Luxturna (Spark Therapeutics) approved by the FDA for the treatment of Leber’s congenital amaurosis.

In the past 20 years, the relevance of AAV vector-based therapy in clinical transformation has continued to increase, and it currently accounts for 8.1% of global gene therapy clinical trials. 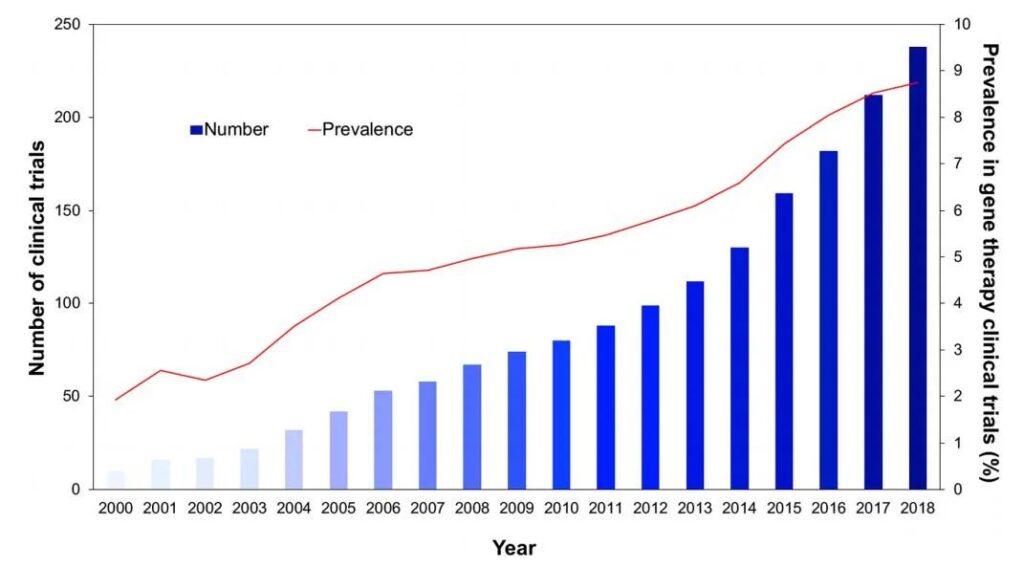 The first AAV-based gene therapy drug approved for clinical use in Europe is alipogene tiparvovec (AT) for the treatment of lipoprotein lipase deficiency (LPLD), a rare autosomal recessive disease.

The drug was approved in 2012 under the trade name Glybera. AT gene therapy provides a variant of LPL gene, LPLS447X, to correct the function of LPL in patients with LPL.

In a phase III clinical trial, 14 weeks after the administration of AT, the peak level of chylomicrons after a low-fat diet was reduced by 79%.

There are currently 17 gene therapies approved by the US FDA, including the AAV vector voretigene neparvovec rzyl (VN), which was developed by Spark Therapeutics in 2017 under the trade name Luxturna.

VN contains an AAV2 that wraps the RPE6 gene, which is used to treat biallelic RPE65-related retinal dystrophy, a rare genetic disease that leads to impaired visual function, declines with age, and ultimately leads to blindness.

In a phase III clinical trial conducted in 2012 (NCT00999609), 1 year after patients with Leber congenital amaurosis type 2 received subretinal injection of VN, 65% of the participants achieved the greatest improvement. Before VN was approved, there were no drugs to treat retinal dystrophy.

The second AAV-based gene therapy approved by the FDA in 2019 is Onasemogene abeparvovec xioi (OA), developed by AveXis under the trade name Zolgensma. OA uses AAV9 expressing a functional SMN1 transgene to treat type I spinal muscular atrophy (SMA1) in children under 2 years of age.

SMA1 is characterized by the loss of motor neurons in the brainstem and spinal cord, resulting in severe impairment of motor function and eventually death due to respiratory failure. It is the most common single-gene genetic disease that causes infant death.

In a 2017 phase III clinical trial called STR1VE (NCT03306277), after treatment, 91% of patients still did not need permanent respiratory support at 14 months, and 50% of patients were able to sit still independently at 18 months . The following table lists ongoing and upcoming clinical trials based on AAV. 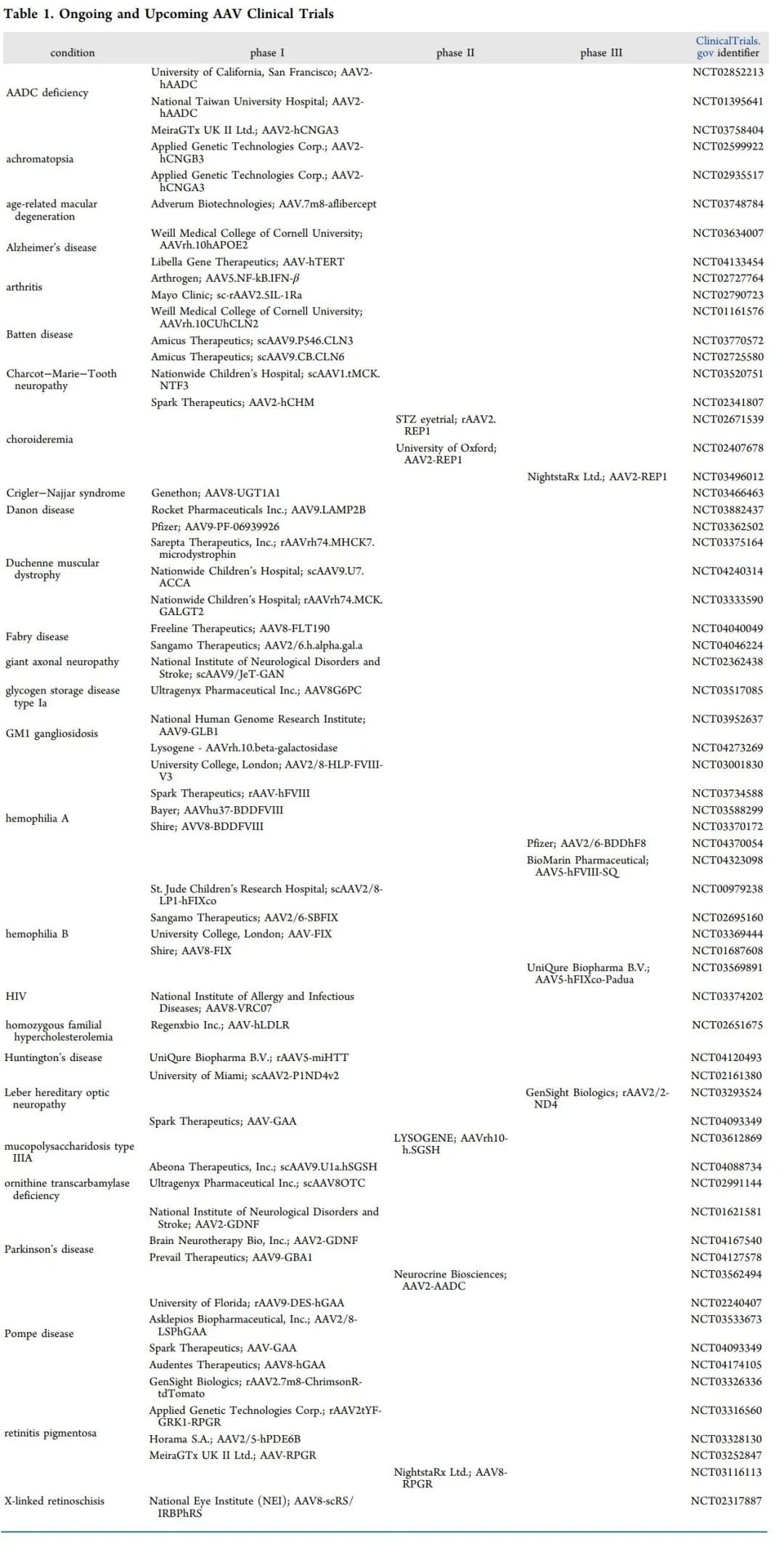 The most common AAV-mediated therapeutic intervention is gene replacement, which is characterized by the introduction of functional copies of genes to treat single-gene diseases. This method is mainly used for rare and non-treatable diseases, and is the basis of the above two FDA-approved AAV gene therapies.

Another notable example of gene replacement is the ongoing clinical trials for the treatment of severe hemophilia A, which is the coagulation protein factor VIII deficiency. It is a recessive X-linked disease. One-third of cases in the United States can be caused by spontaneous mutations, and it occurs in approximately 1 in 5000 newborns in the United States.

Gene addition is the most widely used application of AAV gene therapy, because it can be used to treat more common non-single-gene complex diseases, such as chronic, autoimmune or infectious diseases.

Examples of the use of AAV for gene addition include ongoing clinical trials for the treatment of rheumatoid arthritis. Currently, Arthrogen is undergoing a phase 1 clinical trial (NCT02727764).

The AAV vector carries a transgene of IFN-β, an anti-inflammatory mediator that plays a role in bone and cartilage protection.

In this method, the AAV transgene encodes a miRNA precursor, which is processed by the target cell’s own RNAi mechanism to produce miRNA, a small non-coding RNA strand that can base with complementary sequences in the mRNA Pair to suppress its expression.

Most efforts to use AAV for gene silencing are still in preclinical research, because silencing has several specific safety issues that must be addressed.

A major issue is the possibility of non-target silencing. Another problem is the mechanism of RNAi saturation.

In this mechanism, the expression of transgenic miRNA may overwhelm and destroy the production of endogenous miRNA, leading to cytotoxicity.

Most AAV successfully used in preclinical and clinical research is limited to natural capsid serotypes, but the wide clinical application of these AAV serotypes has obvious limitations.

The existence of neutralizing antibodies against AAV is still an important obstacle to systemic delivery.

These neutralizing antibodies interfere with the entry of AAV into target cells, intracellular transport and unpacking in the nucleus, thereby preventing transduction.

In order to better understand the immune response generated by exposure to AAV, some studies have been conducted to examine the IgG subclasses produced and found that they are mainly IgG1.

Another problem of AAV-mediated gene therapy is the size limit of the genome (4.7kbp), including ITRs, leaving only a ∼4.5kbp size space for the transferred gene, which reduces its targeted indications to only It is the expression of those small fragments of transgenes.

AAV can be designed through capsid modification, surface coupling and encapsulation to solve the limitations of natural AAV. 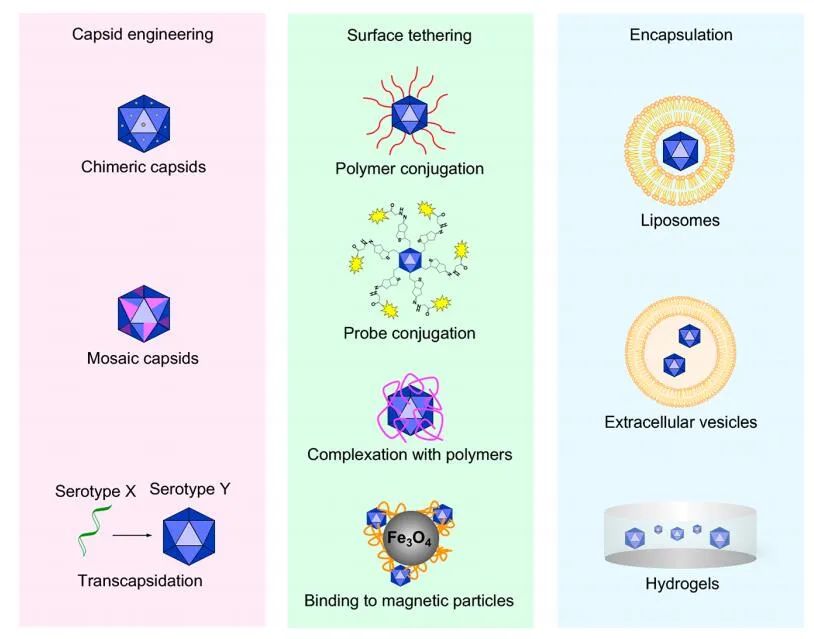 A common goal of AAV engineering is to avoid inactivation by neutralizing antibodies in the blood circulation after systemic administration.

Preventing neutralization by modifying the capsid binding sites of neutralizing antibodies is a promising method.

However, many of these sites are essential for the transduction of AAV, so it is challenging to modify it without compromising its function.

In addition, surface tethering and encapsulation using polymers, lipids, and hydrogels can protect the AAV capsid from nAbs, allowing it to evade detection by the immune system and antibody responses.

Another benefit of AAV engineering is to improve targeted delivery and activation by binding tissue-specific ligands to the capsid, surface coupling and encapsulation materials. Passive release of aav from packaging materials (such as silicon particles with large pores) can extend cycle time and extend delivery time.

Materials that respond to external and internal stimuli (such as light, pH changes, or enzymatic degradation) allow AAV to be released or activated in the target tissue or cell type, while the magnetic particle-bound AAV is directed to the target by applying a magnetic field.

Engineered AAV can also be used to overcome the limited genome size and combine multiple treatment modalities for multimodal therapy.

Multiple genes in the mutation pathway in disease cells can be reprogrammed by delivering two genes, one through AAV and the other through the second nucleic acid in the surface-coupled or encapsulated AAV vector; add the coding AAV to the tissue engineering scaffold The growth factors can promote tissue regeneration through gene activation and structural support; combined administration and AAV interfere with abnormal activities and reprogram diseased cells at the same time, thereby producing a synergistic therapeutic effect.

With the emergence of clinically approved products in the global market and more and more successful clinical trials being conducted, AAV is at the forefront of gene therapy, but its smaller genome and neutralizing antibodies limit its application in many diseases .

Multi-mode engineered AAV solves the limitations of AAV and single-mode gene therapy, because they not only expand the therapeutic potential, but also can act synergistically on multiple aspects of the disease itself.

The engineered AAV that is currently being explored to combine the second treatment method is an undeveloped field of gene therapy, which can surpass the traditional single-mode gene delivery system.