One of the mechanisms that help maintain immune tolerance is immune checkpoint (ICP). In the past 20 years, extensive research has proved the importance of ICP for immune tolerance.

Abatacept (Orencia®), the fusion protein of CTLA-4, which strengthens the immune checkpoint, has been approved for the treatment of adult rheumatoid arthritis, and more drugs targeting ICPs to treat autoimmune diseases are also under development. 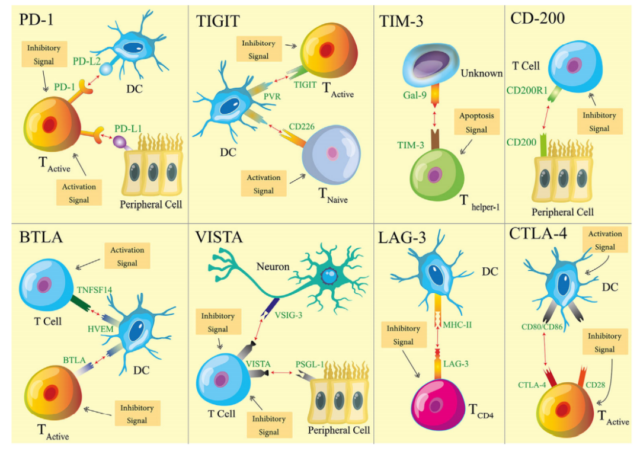 It is mainly expressed after activation of T cells, B cells, dendritic cells (DCs) and macrophages. PD-1 has two ligands, PD-L1 and PD-L2.

The activation of PD-1 inhibits T cell proliferation, cytokine secretion and cytotoxicity;
The increase in the expression of PD-1 by macrophages leads to an increase in the level of IL-10, which reduces the level of IL-12 in the blood;
Finally, PD-1 positive APCs are weaker than PD-1 negative APCs in promoting the differentiation of CD4-T cells into T regulatory cells (Tregs).

An ICP receptor mainly expressed on DCs and activated T cells, including memory T cells and Tregs. It has two ligands (B7-1) and CD86 (B7-2), which are mainly expressed on APCs. CTLA-4 competes with CD28 to obtain CD80 and CD86, thereby performing its immunosuppressive function, leading to T cell proliferation and cytokine secretion weakened.

It belongs to the CD28 family and is mainly expressed on activated T cells, but also on resting B cells, mature DC and natural killer (NK) cells. BTLA ligand is the herpes virus invasion medium (HVEM), expressed in resting T cells, macrophages and immature DC cells.

The combination of BTLA and HVEM has a weakened effect on immune stimulation. This effect also inhibits T cell proliferation and B cell activation, reduces the number of CD8+DCs, and reduces TNF-α, IFN-γ, IL-2 and IL-4 The secretion of cytokines. 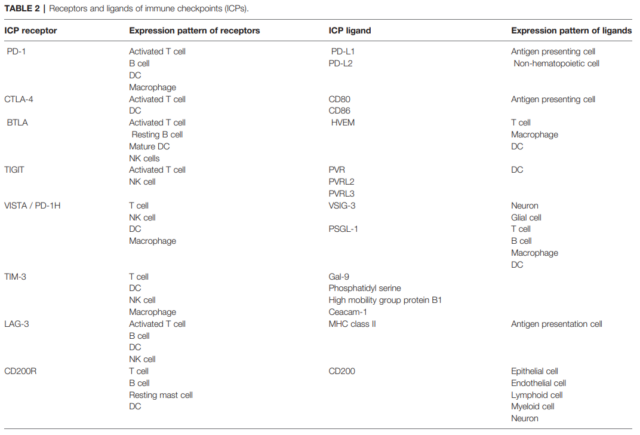 The most successful soluble ICP receptor drug is Abatacept, which is a fusion protein consisting of the FC fusion of human CTLA-4 extracellular domain and human IgG1. 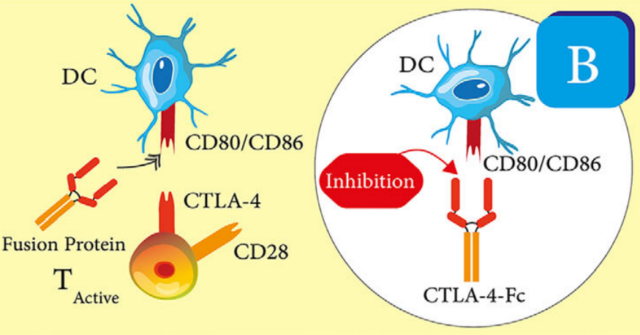 In 2006, Abatacept was first approved for the treatment of RA. Among patients treated with Abatacept, 21.8% achieved ACR50 after 6 months; in contrast, only 3.8% of placebo-treated patients achieved ACR50.

In 2011, Belatacept, a derivative of Abatacept, was also approved as an immunosuppressant for kidney transplantation.

In addition to Abatacept, other PD-L1-Fc fusions have also been reported. In various autoimmune disease models, including experimental autoimmune glomerulonephritis and lupus, the effectiveness of this fusion protein has been demonstrated.

According to histological evaluation, PD-L1-Fc can significantly reduce autoantibody production and renal tubular protein deposition in lupus mouse models. PD-L1-Fc treatment prolongs the survival period of treated mice from an average of 45 weeks to 60 weeks. When PD-L1-Fc is used prophylactically, it completely prevents proteinuria.

TIGIT-Fc fusion protein is another example of a soluble receptor. In a mouse model of acute GVHD, TIGIT-Fc treatment increased the survival rate from ~5% to ~30%.

Others have explored adding cytokines to the fusion protein composed of ICP ligand and Fc, an immunosuppressive protein, including CD200, Fc and TGF-β, to increase the proportion of Tregs in the spleen from 3% to more than 10%.

Some viral proteins have similar biological functions as ICP receptors or ligands. UL144 is a cytomegalovirus protein homologous to HVEM, and HVEM is a ligand for BTLA.

UL144 can be used to activate BTLA, and its activity in inhibiting T cell proliferation and activation is approximately three times that of HVEM. In addition, the four mutants of HVEM, namely S58R, G68T, L70W and L90A, not only have the same binding selectivity as UL144, but also have a 10-fold higher affinity for BTLA than the wild type.

The mutant has a significant inhibitory effect on the type I interferon signal pathway sensitive to B cells and NK cells SHP-1, and effectively inhibits TCR-mediated antigen signal transduction. 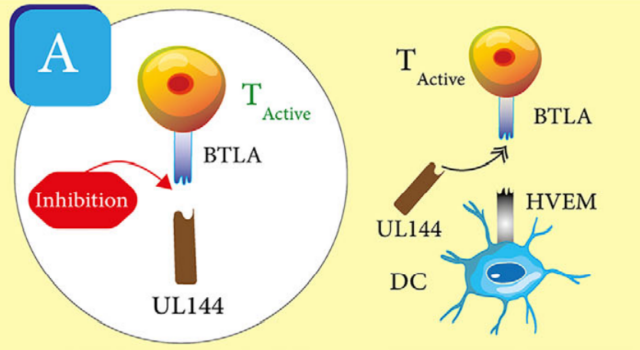 In an anti-neutrophil cytoplasmic antibody-related vasculitis (AAV) model, it was found that anti-BTLA agonist antibodies can inhibit T cell proliferation by 32% and IL-17A secretion by 30%. It is worth mentioning that IL-17A is a key driving factor in the pathogenesis of AAV. 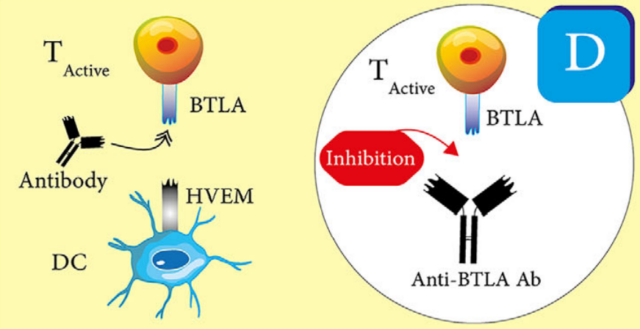 IMP761 reduced inflammatory T cell infiltration in the DTH site to one third of the control level. In vitro, IMP761 reduced the proliferation and activation of T cells induced by autoantigens, with an average inhibition rate of 50%.

The immunosuppressive effects of ICP agonist antibodies have also been confirmed in graft-versus-host disease (GVHD) and asthma models.

Studies have shown that anti-VISTA agonist antibody treatment significantly prolongs the survival time of GVHD model mice. The treated mice can live for 18 months without signs of GVHD, infection or cancer.

When the anti-VISTA antibody was used to treat OVA-induced asthma in mice, the accumulation of eosinophils in the bronchoalveolar lavage fluid of these mice was reduced to one-third of the level of the untreated control. 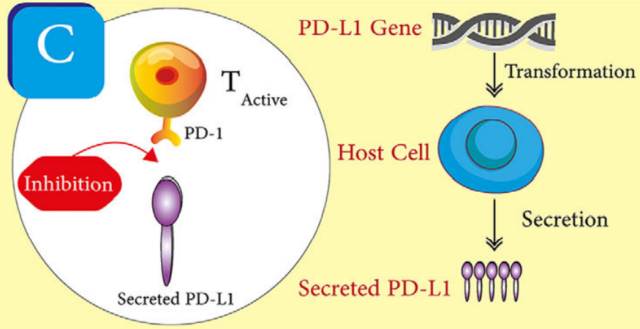 Another PD-L1 adenovirus was tested in diabetic mice in a pancreatic islet transplantation model. Viral treatment resulted in high levels of soluble PD-L1 in mice for at least 28 days, making the survival time of pancreatic islet grafts from an average of 8 days. Extend to 28 days.

In addition, the treatment reduced blood glucose levels (from >20.0 mmol/L to <11.1 mmol/L), which is another indicator that the treatment helps protect islet grafts.

DC cells expressing PD-L1 and myelin oligodendrocyte glycoprotein derived antigen peptide (MOG, p35-55) at the same time are used for the treatment of experimental allergic encephalomyelitis (EAE). Compared with the control, accept these The severity of EAE in mice transplanted with dual expressing DC cells was significantly reduced.

In addition to DCs, other types of cells have also been designed and used to improve autoimmune diseases. Pancreatic β-cells are engineered to express anti-CTLA-4 single-chain antibody. Among transgenic NOD mice, the incidence of diabetes in WT mice is 59%, while the incidence of diabetes in NOD mice with CTLA-4 expressing pancreatic β-cells is only 7.4%.

GSK-2831781 (IMP731) is a humanized IgG1 monomer targeting LAG3. It is modified by Fc fucosylation to enhance ADCC activity and reduce the number of activated T cells expressing LAG-3.

Although GSK has terminated the Phase II clinical research project of GSK2831781 for active ulcerative enteritis, it is still carrying out further evaluation of efficacy, safety and biological mechanism to determine the next clinical development plan of GSK2831781.

In addition, GSK is also developing a psoriasis indication for GSK2831781, which is currently in phase I.

In the treatment of autoimmune diseases, immunosuppressive effects should be exerted in principle. Usually, this suppression occurs not only on autoimmunity, but also on healthy immunity, which may lead to immunodeficiency and adverse side effects.

However, according to the reported data of existing ICP therapies, these therapies do not seem to have serious side effects. Abatacept has been clinically proven to be safe. The data of GSK-2831781 in Phase 1 clinical trials also show good safety (NCT03965533 And NCT02195349).

Experimental treatments targeting ICPs show relatively mild and acceptable side effects, and none of the various treatments described in this article have serious side effects.

In general, the development of ICP-targeted autoimmune disease therapies is still in its infancy, with fewer drugs approved for clinical use, and fewer published studies.

However, this also provides a broader vision and development space for exploring ICPs as a therapeutic target for autoimmune diseases.

In view of the potential of ICP as a therapeutic target in autoimmune diseases, it is reasonable to believe that ICPs therapy will achieve more success in the future and is expected to become a new direction in the treatment of autoimmune diseases.